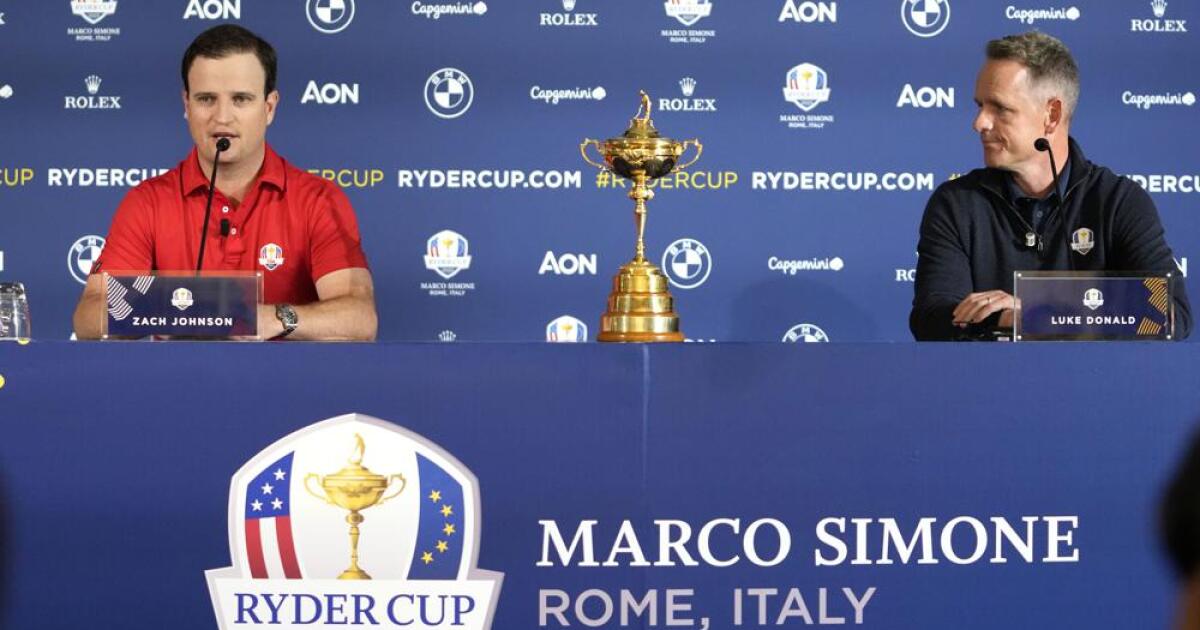 ROME (AP) — Whether or not Tiger Woods comes to Italy for the Ryder Cup next year, he will be an integral member of Team USA, captain Zach Johnson said Tuesday at the start of the year ceremonies.

“Given who he is and what he does, I can tell you right now, I don’t know if he’s going to be here next year, but he’s going to be a part of this team in some capacity,” Johnson said. “It already exists, practically.

“I can’t put it mildly – he loves the Ryder Cup. He made that his priority and certainly Team USA’s. He wants to be a part of it as best he can.”

Woods was a player on eight Ryder Cup teams and was vice-captain in 2018. But in February 2021, he broke bones in his right leg and ankle in a car accident near Los Angeles.

Next year’s event will be held on the hilly Marco Simone circuit outside Rome.

“Obviously he’s been through some things lately that have made it difficult for him, whether it’s the travel or what have you, but he and I will be in constant contact,” Johnson said. “He has great ideas. He’s great at encouragement, always positive.”

“The beauty of our USA team is that we have really great youth,” Johnson said. “And their role model on the golf course is Tiger Woods.

“I don’t know what will happen next September, but you can be sure he will be in constant contact with our team.”

The status of many of the top players in the 2023 edition is in doubt due to lawsuits filed on both sides of the Atlantic involving the Saudi-backed breakaway LIV Golf Series.

But Europe captain Luke Donald said there had been “no discussion” of the conflict with US officials this week.

Johnson also had little to say on the matter.

“We are two separate entities, and so there are authorities who are much smarter than me who are dealing with this. … It’s out of my purview and out of my control,” Johnson told The Associated Press. “I want 12 guys on the US Ryder Cup team in 2023.”

Marco Simone will become the third course in continental Europe to host the Ryder Cup, following Valderrama in Spain (1997) and Le Golf National in France (2018).

The course has been completely redesigned with Ryder Cup and match play in mind, even reversing the order and direction of some holes.

The revamped course proved to be a serious test, hosting the Italian Open twice in the past 13 months.

“Thirteen fewer wins a year ago; 14 wins this year, which (shows) it’s a good test of golf,” Donald said.

From the highest points of the track there is a view of St. Peter’s Cathedral in the distance.

“Somebody told me that Marco Simone has more grief than Augusta National (and) I’m like, ‘Okay, right.’ Johnson said. “I think so, to a T. It has everything.

“It’s going to be a tough physical test when you’re playing four sessions in two days. So, you should take this into consideration. As a player, it’s tough. I can’t even imagine being a caddy and trying to play potentially 72 holes in two days.

“Hopefully I have enough depth that I don’t have to play one or two guys all five sessions,” Johnson said. “That would be a luxury.”

The key holes are at the end: the driving par-4 16th, the challenging par-3 17th and the downhill par-5 18th with water covering the green.

Although Rory McIlroy led a strong contingent of European players at last month’s Italian Open at Marco Simone, no notable Americans showed up.

And Johnson has no plans to encourage his potential players to travel to the next Italian Open at Marco Simone in May.

“I don’t think that’s what my role is,” Johnson said, referring to the travel that will comprise a busy stretch of the season. “So I can mention it, but encouragement or persuasion won’t be part of it.”

THE HOUSE OF ADVANTAGE

Still, given the results the USA had in Wisconsin, as well as a Presidents Cup victory that featured a team with all 12 players ranked in the top 25 in the world, the Americans may be favored next year.

“I fully expect us to be the underdogs despite the (home) winning percentage we’ve had over the last 30 years,” Donald said.

Johnson was then asked if he really thought Europe was an underdog.

“I can give you a definite answer, ‘No,'” Johnson said. “Apparently, they were very comfortable here for 30 years. So, “No.”

Suit for a boy in a wheelchair wins NHL players, fans