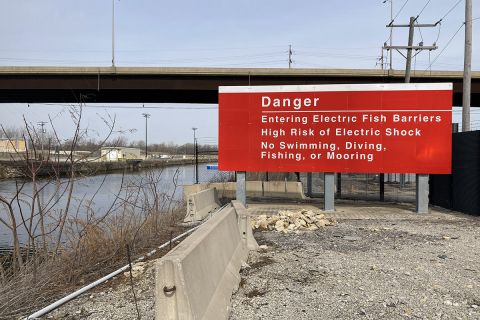 The current system has limitations. For example, its electrical barriers sag when barges pass through them, creating short windows during which small fish can potentially pass through them.

The corps is working to close these gaps by building a new barrier in Lockport, capable of inflicting a stronger push. The Brandon Road inter-basin project – on the Des Plaines River about 12 miles south of Lockport’s existing barriers – will add another layer of protection.

The invasive carp, which travels upstream to the sluice and dam, will encounter a glove that begins with commercial fishing downstream from the Joliet structure. If the fish evades nets, it will swim into a column of bubbles designed to prevent carp, their eggs and larvae from getting caught in the cracks around the barges.

Next another screen with bubbles and noise was broadcast into the water, forcing the fish to avoid annoyance by sailing away from the sluice, instead going below the impassable dam where the fishermen are waiting.

Fish that are not intimidated by bubbles and noise will encounter electrical barriers and other field of speakers upstream.

“We are confident that a combination of structural and non-structural measures working together will be effective in preventing invasive carp in the lake,” said Andrew Leichti, project manager for the U.S. Army Corps of Engineers, Rock Island County.

Representatives of the corps say that after the possibility of carp to swim upstream in the Great Lakes is almost impossible. According to current deadlines, the barrier will be completed no earlier than 2030.

It will be an expensive venture that will cost $ 858 million and will run for six to eight years.

But fans of the Great Lakes call this trick compared to the possible cost of carp invasion.

One 2005 study found that the current cost of water invasions in the Great Lakes region is $ 5.7 billion a year. Lawyers note that over the years their number has undoubtedly grown with the arrival of new invaders.

“It’s just a glimpse of what it means to the people of Michigan,” said Sarah Lesage, coordinator for aquatic invasive species of the Department of the Environment, Great Lakes and Energy of Michigan (EGLE). “And you can’t go back.”

Zebra and quagga mussels are a good example. They forever changed the Great Lakes, displacing other species and significantly changing the chemical composition of lakes. They have played a role in everything from the sharp drop in whitefish catches to the rise of avian botulism, which has killed species of waterfowl such as loons and crohals, cormorants and seagulls.

Studying this past experience changed Michigan’s strategy, LesSage said, forcing government officials to dramatically increase efforts to curb invasions before they are established.

By 2010, LeSage said, Michigan had only $ 24,000 in special funding for such efforts. Today, that figure is about $ 9 million a year, including the federal dollars from the Great Lakes Restoration Initiative in 2010 and the $ 5 million that lawmakers are allocating to state funds created in 2014.