What is the US trade deficit and why is it important? 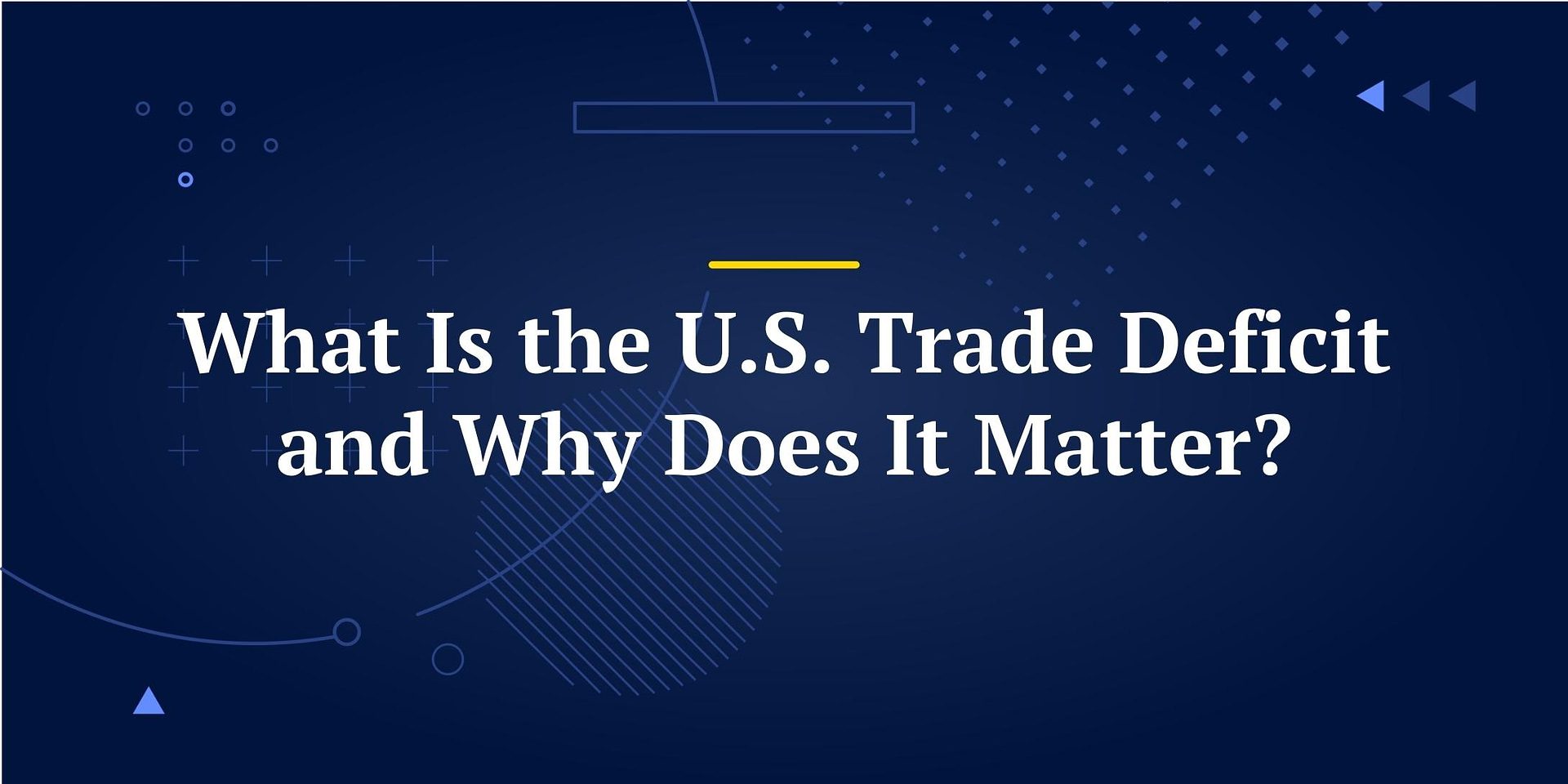 You may hear about the “trade deficit” in the news from time to time and wonder what it means. ​​​​​​While this may seem like a big problem that doesn’t affect people, it can have a significant impact on the economy, which in turn affects how much money you make, how expensive it becomes for you things and how hard work is to get them.

At the same time, we sometimes hear the impact of the trade deficit being overstated and described as if it were a terminal problem that could sink the US economy. Let’s see.

What is a trade deficit?

The United States buys goods from, and sells other goods to, Japan, Canada, Mexico, Germany, the EU, and China.

Thus, in evaluating trade relations with any individual country—say, China—the US may be buying more from that country than it is selling.

In that case, the US would have a trade deficit with China.

🤔 Frequently asked question: What do you call the balance of trade when exports exceed imports?
💬 This is called a positive trade balance.

How to calculate the trade deficit

Each country has its own unique way of calculating, accounting and keeping track of exports to other countries and what it in turn imports from that same country. Within each global object pair, there will be one that will have a surplus and another that will have a shortage.

Here’s an example from the U.S. Bureau of Economic Analysis, published on Tuesday, February 8, 2022.

👉 note: The trade balance is based not only on a country’s goods, but also on services.

History of the US trade deficit

The United States’ trade balance went from positive to negative in the 1970s and has remained negative ever since. The deficit widened significantly starting in 1990, but recovered in 2009 and has been gradually increasing since then.

In the chart below, the deficit increases as the line descends.

Here’s a short video showing the trade deficit by country and how it changed from 1960 to 2022.

In a country with a negative trade balance, the currency usually depreciates against other world currencies. Its economy suffers negative consequences ranging from price inflation to job loss. Conversely, a trade surplus usually leads to a strong economy.

This pattern is not universal, and there may be important exceptions, as we will see later.

Several factors can cause a trade deficit. More than one of these factors may be operating at any given time.

When a country lacks productivity and growth relative to others, it becomes less competitive. Other countries become more productive and produce less goods. A trade deficit occurs when buyers turn to goods from less expensive countries.

A declining country loses its export potential and must increase its imports because it cannot produce enough to meet its needs.

A trade deficit can occur when a country has limited supplies of essential resources and must import them. Countries that must import all or most of their oil, for example, may be forced to run a trade deficit when oil prices are high if they do not export enough goods to cover the cost of importing oil.

The high cost of production can be due to several factors. Countries with high wages or high taxes may have difficulty producing goods that can compete in export markets, which may limit their exports.

Some countries (such as Germany) maintain a positive trade balance despite high wages and high taxes by focusing on high-value goods that buyers are willing to pay for and competing on quality rather than price.

Many people assume that a strong currency is a good thing, but an overvalued currency is actually a liability for a trading country. When the value of the currency is high, the country’s exports become more expensive and imports become cheaper. This can create or worsen a trade deficit.

In theory, the free trade of currencies should correct these distortions. It doesn’t always work out that way. China has deliberately intervened in foreign exchange markets for decades to keep the yuan low and boost its exports. The value of the US dollar, meanwhile, has been artificially inflated by demand from global trade.

The continued strengthening of the dollar makes US exports expensive and US imports cheap and has a significant impact on the US trade deficit.

A trade deficit has several consequences for a country. Initially, some of them may be positive. Over time, more negative effects may occur.

When imported goods are cheaper than domestic goods, imports may rise, creating a trade deficit. This may not be a bad thing for consumers who benefit from lower prices. The availability of inexpensive imported goods helped keep US inflation below average from the late 1990s to 2020.

When domestic production costs are high, manufacturers tend to relocate to other countries, lowering prices but taking away jobs.

A country that constantly sends money reduces the available money supply within the country. Less money and fewer jobs can cause weak demand, leading to deflation.

When a country imports more than it exports, it usually sees its currency fall in value. It buys more currencies of other countries than others buy their own currency. This lowers the value of the currency.

This process is self-correcting to some extent. A trade deficit lowers the value of a country’s currency, which makes that country’s products cheaper and discourages imports, helping to stabilize the trade deficit.

Why the US is different

The US has maintained a trade deficit since the 1970s. At the same time, the US dollar has maintained a high degree of strength, the US economy has grown consistently, unemployment has generally remained low, and there has certainly been no deflation.

This seems contradictory. Why has the US trade deficit, which has persisted for so many years, not harmed the US economy?

It’s all about the dollar

The answer lies in a unique feature of the US dollar. The dollar is not just US currency. It is the global currency used in most trade transactions.

If a country has a trade deficit, it must buy more dollars than it earns. This depletes their dollar reserves and makes their currency less valuable as there are more sellers than buyers.

For the US, of course, this is not a problem. Other countries must earn their dollars by selling goods and services. The US doesn’t have to earn its dollars because it can just print more of them.

In theory, printing more dollars should devalue the currency. As we can see in the chart of the US dollar index, which compares the value of the dollar against the value of a basket of other currencies, this did not happen.

The value of the dollar has persisted despite the continuous growth of the money supply, because the demand for dollars, driven by the growth of world trade, has increased even faster than the supply.

This means that the US can run a permanent trade deficit without seeing the dollar lose value.

High demand for dollars to support world trade also supports the US trade deficit. Because the dollar is in high demand, its value remains unchanged despite the deficit, making U.S. exports more expensive and imports cheaper and sustaining the deficit.

Where is the deficit now?

The US trade deficit has been steadily increasing since 2014. Over the past few months, the deficit has fallen for the first time in years, falling from nearly $110 billion in March 2022 to just under $80 billion in June. The drop was due primarily to record exports of natural gas from the US and very high prices for this commodity. Exports increased by 1.7%, imports decreased by 0.3%

It is unclear whether this trend will continue. The US deficit will vary depending on import and export levels and commodity prices, but it seems unlikely that the US will move to a positive trade balance any time soon.

Fortunately, the impact of permanent deficits is traditionally muted. After all, the US economy has been consistently expanding despite decades of deficits. In short, don’t expect the deficit to end, but don’t listen to the people who say the deficit will crush the US economy!