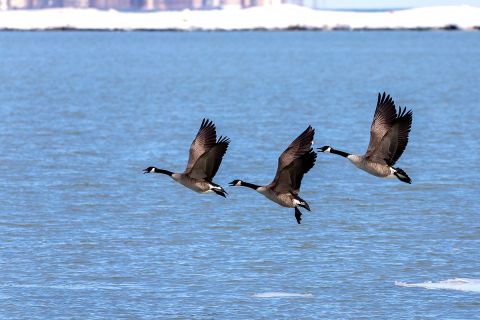 Government officials said the risk to humans is low, but they are concerned about the future spread and are taking steps to contain the disease among Michigan birds.

“It’s important to remember that it’s a zoonotic disease, so it can spread between wildlife and humans,” Dr. Megan Mariarty, a wildlife veterinarian with the DNR, said in an interview with Bridge. “So people are still good to take precautions.”

Avoid contact with sick or dead birds, wash your hands and stay away, Mariarty said.

Positive cases have been from Canadian geese and tundra swans in St. Clair County, snowy owls in Macomb County and whooper swans in Monroe County.

Officials first discovered the virus in a poultry flock in Kalamazoo County in February. Domestic flocks are usually infected with the disease from wild birds, which can move more easily from place to place.

State agricultural regulators are urging poultry owners to protect their flocks, isolate birds from humans and wild birds, and disinfect their hands and clothing after interacting with their flock.

The virus has infected wild birds at least 25 states so far this year. Officials expect those numbers to rise as testing continues.

Since 2003, the World Health Organization has received reports of more than 860 human H5N1 infections, including 53 percent of deaths. But experts note that many cases are asymptomatic, and the current wave poses a low risk to humans.

Only one person – a poultry owner in the UK – has recently been documented to be infected, according to the Centers for Disease Control and Prevention. The patient had no symptoms.

There are still no documented human cases in the United States. The CDC notes that properly treated and cooked poultry remains safe to eat.

Birds secrete the virus through saliva and waste, and humans can be infected through the eyes, nose, mouth or by inhalation. Typical patients are people who have been in close unprotected contact with infected birds.