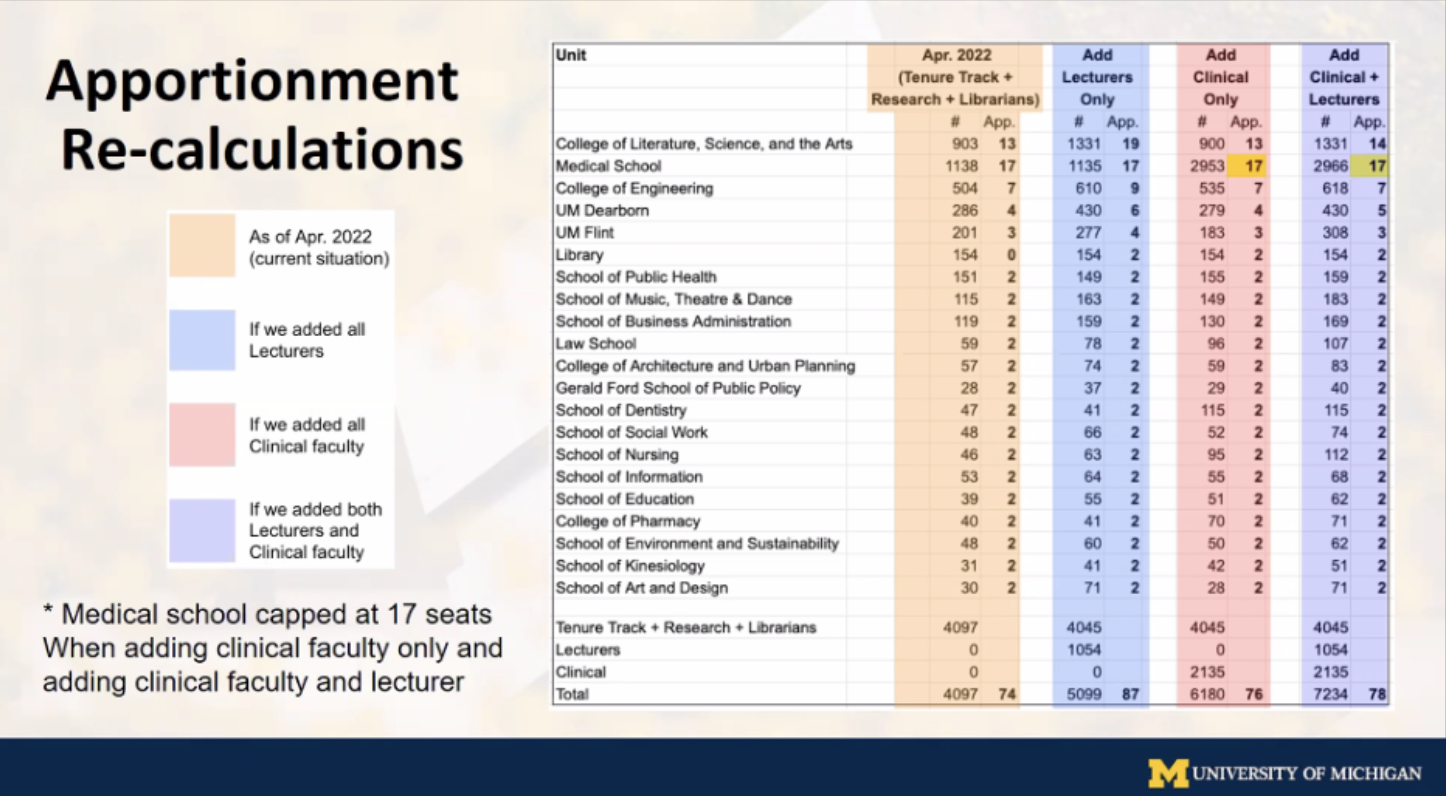 The University of Michigan Faculty Senate met Monday in University Hall in the Alexander G. Ruthven Building to discuss the possibility of a partial restructuring Meeting of the Senate.

The Faculty Senate currently consists of more than 4,250 members from all three UM campuses – all tenured professors, research faculty, librarians, administrators, and deans are members. Currently, only faculty, researchers, and librarians can run for a seat in the Assembly Senate, a more elective body. The Faculty Senate discussed the possibility of opening the Senate Assembly to faculty and clinical faculty as well.

Silvia Pedraso, Chair of the Senate Advisory Committee on Universities, called the meeting to order and introduced the President of the University of Santa Ona to the Committee. Ono addressed the Committee and answered questions from members of the Faculty Senate. Ono was talking about his transition in the role of the president and the importance of faculty management.

“The University of Michigan is an institution that I have admired for a long time,” Ona said. “This university senate is a very important body, and I hope you will welcome me back to have such conversations on a regular basis.”

Ano said academic achievement and building trust in the central administration are two of his top priorities. Ohno told the Senate that he is committed to implementing feedback from UM faculty to achieve these goals.

“We’re hoping that a year from now we’ll have a clear vision of where we’re going and that we’ll be rowing in the same direction (as the university),” Ona said.

After Ono spoke, the senate discussed the possibility of expanding the senate assembly lecturers and clinical faculty — who often teach at the medical school and work at Michigan Medicine — on the faculty senate. These faculty are currently ineligible to run for office in the Senate Assembly.

Pedraso offered a resolution increasing the total number of representatives in the Assembly from 74 to 87, 76 or 78 — a decision that will depend on whether the Faculty Senate votes to approve the addition of faculty only, clinical faculty only, or both. No schools will lose seats, but some may be able to elect additional representatives to the Assembly if one or both groups are allowed to join.

The Senate is divided on whether the Assembly should be restructured to make room for clinical and teaching faculty. Brian Zink, senior associate dean for faculty and staff development at the School of Medicine, expressed support for the structural changes.

“Full representation for all the hard-working people who earn faculty positions at UM is the just and right thing to do,” Zink said. “Adding clinical faculty from the School of Medicine to the Senate would add diversity to the Senate and better represent our faculty as a whole than just our full-time alumni and research alumni do at this time.”

Zink gave two examples of clinical faculty who might consider joining the Senate as representatives if they can run: Laura Hopson, clinical professor and vice chair Emergency medical care of the Medical School Department and Gifty Kwaki, Clinical Associate Professor of Surgery. Zink said both have expressed interest in running and will bring a wealth of perspective and knowledge to the Assembly.

“(I say this) to personify these concepts and highlight two clinical track faculty who are examples of the type of people we would bring to the Senate,” Zink said.

Michael Thales, a professor in the College of Engineering, urged the Faculty Senate to keep the same structure as it is now. Towles previously served as chair of the Faculty Senate from 2007 to 2010. Towles said the large Faculty Senate already has enough votes, so a smaller Assembly is ideal. Instead, he said the clinical faculty should form its own committee, like SACUA, which works with the Assembly and Senate but has separate meetings.

“(The Senate Assembly) is not a club; it addresses the academic concerns of diverse groups,” Towles said. “The clinical faculty should come together as a group similar to how SACUA works.”

Daily News contributor Emma Lapp can be reached at emmallapp@umich.edu.