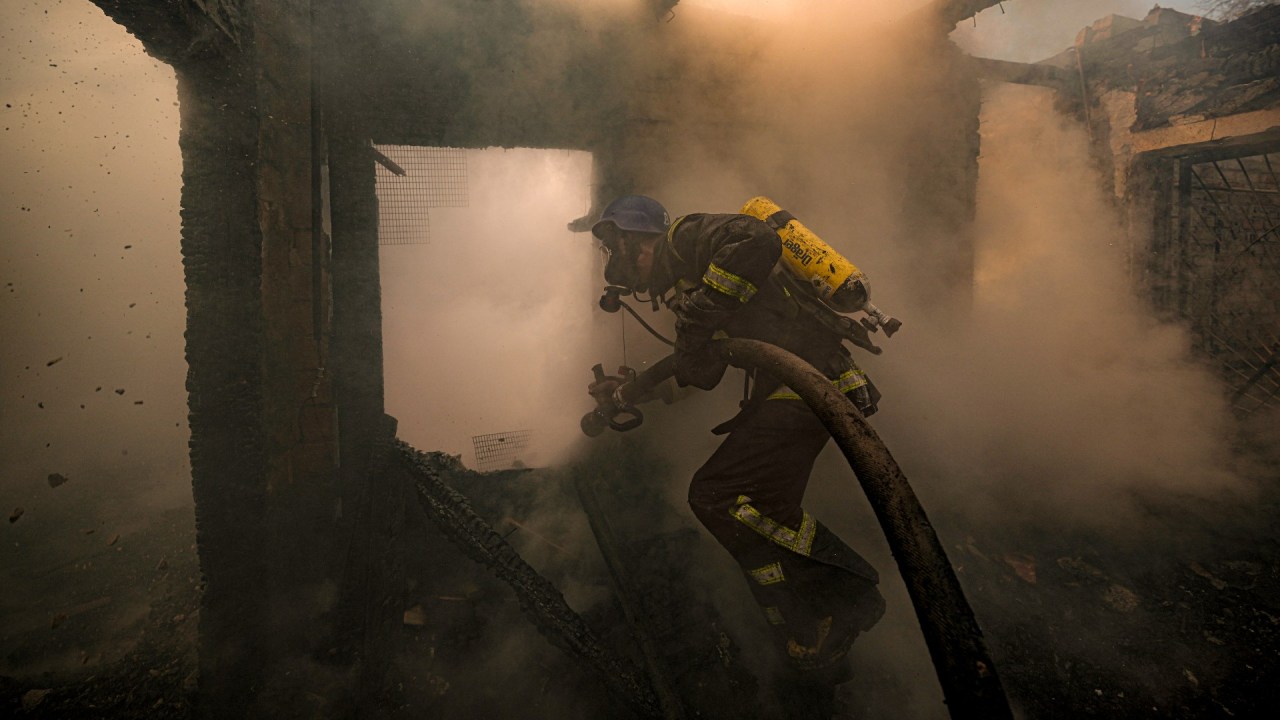 Kyiv, Ukraine (AP) – Ukrainian leaders have accused Russia of capturing 15 rescuers and drivers from a humanitarian convoy trying to deliver desperately needed food and other supplies to the bloodied port city of Mariupol, which also came under naval attack after weeks of air and land strikes. .

Ukrainian President Volodymyr Zelensky estimates that 100,000 civilians remain in Mariupol, the site of some of the most severe devastation in the war, while Russia continues its nearly month-long offensive, bombing cities and towns. Those who came out described the destroyed city.

“They have been bombing us for the last 20 days,” said 39-year-old Victoria Totzen, who fled to Poland. “For the past five days, planes have been flying over us every five seconds, dropping bombs everywhere – on homes, kindergartens, art schools, everywhere.”

Photo: Surrogate children born in Ukraine are waiting for the war in the basement

Speaking on Tuesday in his nightly video address to his nation, Zelensky accused Russian forces of blocking the convoy with help, despite agreeing to the route ahead of schedule. He said they had captured a convoy near Mangush, near Mariupol, capturing MOE staff and drivers, and that authorities were trying to secure their release.

“We are trying to organize stable humanitarian corridors for the people of Mariupol, but almost all our attempts, unfortunately, are thwarted by the Russian occupiers, shelling or deliberate terror,” said Zelensky. He said that

The Red Cross confirmed that a convoy of humanitarian aid trying to reach the city could not enter.

The convoy’s attempt to help came at a time when Russian Navy ships had joined several weeks of Russian air and ground strikes on Mariupol, U.S. officials said.

A senior U.S. defense official, speaking on condition of anonymity to assess the Pentagon, said Russian ships in the Sea of ​​Azov had added to the shelling of Mariupol. The official said there were about seven Russian ships in the area, including a minesweeper and a pair of landing craft.

One exhausted survivor of Mariupol was shaking her hands when she arrived by train in the western city of Lviv.

“There is no connection with the world. We couldn’t ask for help, ”said Yulia Krytka, who was helped by volunteers to deal with her husband and son. “People don’t even have water there.”

US President Joe Biden due to shipment to Europe on Thursday’s NATO emergency summit on Russia’s invasion and increasingly hostile stance toward the West, where NATO members and other European allies are strengthening their defenses.

Biden travels to Brussels and Poland, which have taken in more than 2 million Ukrainian refugees since the February 24 invasion. He is expected to seek unity among the Western allies and announce new sanctions against Russia.

Responding to CNN, what Russian President Vladimir Putin has achieved in Ukraine, Kremlin spokesman Dmitry Peskov replied: “Well, first, not yet. He has not yet reached. ” But he insisted that the military operation was “strictly in accordance with plans and objectives that were determined in advance.”

Putin’s goals remain to “get rid of Ukraine’s military potential” and “ensure Ukraine’s transition from an anti-Russian center to a neutral one,” Peskov said.

In the capital of Ukraine, Kiev, shelling and shelling continued on Wednesday, and clubs of black smoke rose from the western outskirts.

Heavy artillery fire was also heard Tuesday from the northwest, where Russia sought to encircle and capture several suburbs. Ukraine’s defense ministry said its troops had partially lost three suburbs in the area, but repulsed another, Makarov, west of Kiev.

A video released by Ukrainian police shows them inspecting damage in Makarov, including the city police station, which, according to the officer, struck a direct blow to the roof. Police drove past destroyed homes and on a road killed by shelling. The city seemed almost deserted.

Russian troops bombed and destroyed a bridge in the besieged northern city of Chernihiv that crossed the Desna and connected the city with Kiev, regional governor Vyacheslav Chavus said on Wednesday. Humanitarian aid was delivered across the bridge and civilians were evacuated. Local authorities warned of a humanitarian catastrophe in the city without water and electricity.

A Western official, who discussed military assessments on condition of anonymity, said Ukraine’s resistance had halted much of Russia’s advance but had not sent Moscow’s forces to retreat.

“We have seen signs that the Ukrainians are now a little more offensive,” Pentagon spokesman John Kirby told reporters in Washington. He said that this is especially true in the south of Ukraine, including near Kherson, where “attempts were made to return the territory.”

Many Western military experts warn of overconfidence in Ukraine’s long-term chances in Russia’s much stronger and larger military. Russia’s practice in past wars in Chechnya and Syria has been to reduce resistance to strikes that have leveled cities, killed countless civilians and sent millions to flee.

The United States estimates that Russia lost just over 10 percent of its total combat capability at the start of the battle, including troops, tanks and other equipment.

The invasion has expelled more than 10 million people from their homesalmost a quarter of Ukraine’s population, according to the United Nations.

Thousands of civilians are believed to have died. Estimates of the losses of the Russian military vary widely, but even conservative figures for Western officials are in the thousands.

Putin’s troops are facing unexpectedly fierce resistance that has left most of Moscow’s ground forces miles from central Kiev, and they are slowly advancing in a clear effort to cut off militants in eastern Ukraine. The Russians are increasingly concentrating their aircraft and artillery on Ukrainian cities and civilians.

Negotiations to end the fighting continued on video. Zelensky said talks with Russia were “step by step, but they are moving forward.”

UN Secretary-General Antonio Guterres has said he sees progress on several key issues and that the achievements are enough to end hostilities. He did not provide details.

The Western official, however, said there were no signs that Moscow was willing to compromise.

In their latest update on March 15, Mariupol officials said at least 2,300 people had died during the blockade. Data from the city show that the real victims are much higher, and the bodies lie unresolved. Over the past week, air strikes have destroyed a theater and art school where many civilians were hiding.

Zelensky said in his address that more than 7,000 people were evacuated from Mariupol on Tuesday. Those who remain suffer “in inhumane conditions, in a complete blockade, without food, without water, without medicine and under constant shelling, under constant bombing,” he said.

Located on the Sea of ​​Azov, Mariupol is an important port for Ukraine and is located in the area between Russia and Crimea. The siege cut off the city from the sea and allowed Russia to establish a land corridor to the Crimea.

It is unclear what part of the city Russia occupies, and fleeing residents say fighting continues street by street.

Further west in the coastal city of Odessa on Tuesday, street musicians played under a cloudless sky as barricades stood in the streets and couples parted at the train station in tears as residents prepared for what they feared would be an escalation of the Russian attack.

Odessa, known as the pearl of the Black Sea, was engulfed in bitter air – sandbags and security forces were confronted with romantic jazz emanating from the speakers of the station.

“I can’t understand what happened,” said Igor Topsy, a 56-year-old musician who has been playing drums on the streets of Odessa for more than three decades.

At Central Station, a young man on the platform said goodbye on the phone to his girlfriend, who was sitting inside the train. Only glass separated them.

Anna reported from Lviv, Ukraine. Associated Press writer Yuras Karmanov of Lviv and other AP journalists around the world contributed to the report.