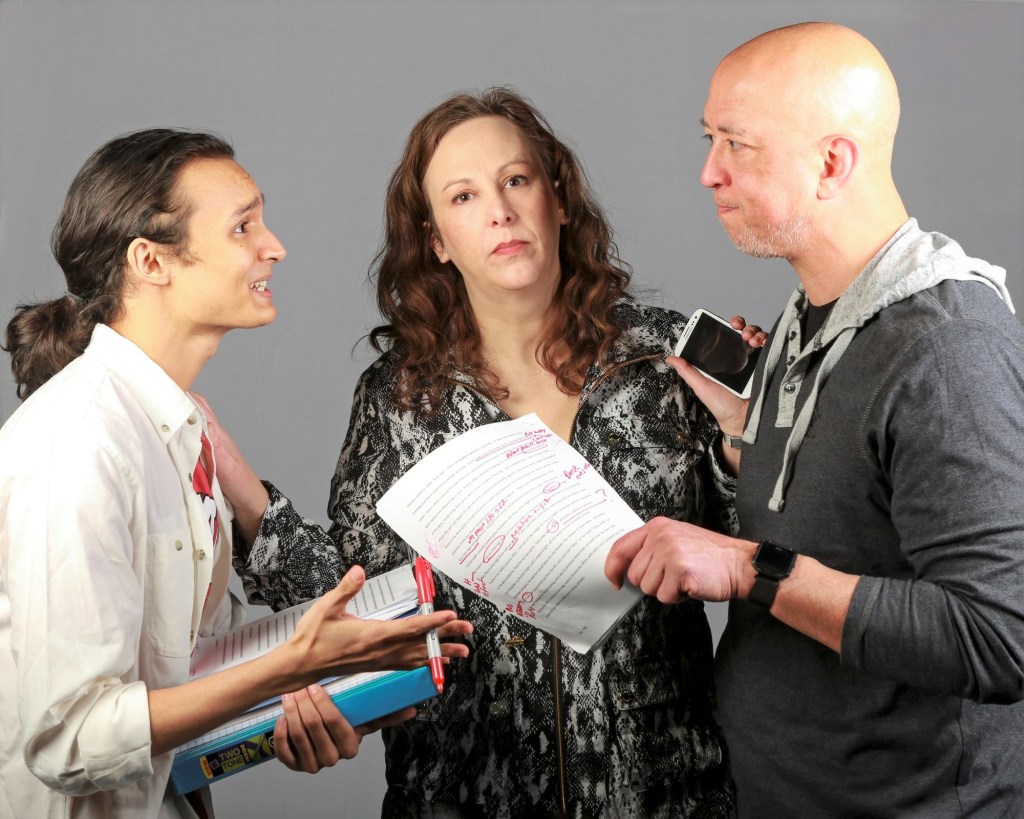 In a war of words focused on facts and fiction, the magazine’s editor is to mediate between a well-known essayist and an avid fact-checker over a teen suicide article in “The Lifespan of a Fact” running March 18-16 at Trenton’s. Open Book Theater.

Art director Christa Schaefer Jubenk said the show is a funny and timely show that looks at how people present facts and try to find out what’s true.

“The debate about what’s true and what’s the facts is literally raging around us, and it’s tackled with a lot of humor without being afraid to ask tough questions,” she said. “It’s not about any of today’s pressing issues, but it can still be widely applied to our world.”

Eubenk said her heroine, the editor, sees the views of both characters.

“Like Emily, I think I’m going back and forth, changing my commitment, questioning every point of view,” she said. “For me, there is no single answer, and I believe that’s how most things in life happen.”

She said sending the play may sound dry, but it’s definitely not.

“I laugh every time I’m behind the scenes and I can just watch the other actors,” she said.

Director Kez Settle said she is discovering the humor of the show during rehearsals.

“You read the script and see the humor and humanity in the story, but the plays are meant to be seen and heard, so when you see and hear them come to life, the humor really comes out,” she said. “Even at the first reading of the cast, we laughed out loud.”

Settle said the design elements also conceptually support the show’s themes, immersing viewers and characters in a world of essays.

She said the show also focuses on our cultural dependence on electronics as a form of communication.

“These elements come together to support and unfold this story from lights to dimming, and my goal is to get viewers immersed in the world of this show and travel with the characters,” Settle said.

She said the show focuses on how the truth is determined.

“Are we telling a story to make something feel, or to convey what really happened?” Said the Teapot. “When can you embellish history? Who cares? Who does it help? This raises many topical issues. “

She said she would like to become the director of the show because she is very interested in delving into these issues.

“The play is very difficult and thought-provoking, but the characters are well portrayed and have a sense of humor that is very humane and compelling,” Kettle said. “These people are familiar, and I think it will engage the audience and really make them think.”

She said the show is relevant on many levels.

“Can we bend the truth to serve art?” Said the Teapot. “If it’s not? This play raises the question of where to draw the line. “

David Liskov, who plays the role of fact-checking, Jim Fingal, said the play has something to say about who is responsible for the truth, while others are more focused on the story and its vision.

“The play through each character raises questions about which generation should be responsible for the facts and how they share the truth with each other,” he said.

“I think each of the characters has great strength and integrity, and the writing is humorous and unexpected,” he said. “It’s also very nice to challenge the different points of view that are present in John, Jim and Emily, and I’ve found that I’m compelled and drawn to their truths, if not fully convinced.”

Ewbank said the show was a hit on Broadway a few years ago.

“We are very excited to present this to our audience,” she said.

The program has adult language.

Participants must present vaccination evidence and an identity card with a photograph, and wear a mask.

SOUTHATE GIRL IN THE OFFICE ENSEMBLE AT THE MUSIC HALL

The “Waitress” cast, which arrives at the Music Hall in Detroit from March 15 to 20, is related to Downriver: actress Stephanie Fibeck, who performs in the ensemble and is the backup of the main Jenna, was born in Southgate, where she lived before 12 years old when her family moved to the District of Columbia.

She went to study musical theater at the University of Oklahoma City.

“The Waitress” is a musical about a waitress who makes pies and dreams of finding a way out of her small town and her stony marriage. If the pie competition and the chance for change give her a way out, she must gain courage and seek the life she craves.

Based on Jane Austen’s novel “Emma,” the story is about Emma, ​​a high school senior in Highbury Prep who strives to become the perfect matchmaker for others, ultimately risking her own happiness.

The show features hits from the best female bands and favorite singers, as well as: Shania Twain’s song “Man! I Feel Like A Woman ”,“ How Will I Know ”by Whitney Houston, The Supremes“ Can’t Hurry Love ”, Gloria Estefan“ Turn the Beat Around ”, Ronettes“ Be My Baby ”, Pat Benathar“ Heartbreaker ”and Cindy’s “Girls Just Want to Have Fun” by Loper.

To order tickets online, go to the page dchstheater.ludus.com/index.php.

The Berman Center for the Performing Arts offers an annual public performance of The Diary of Anne Frank at 10 a.m. March 18 at the Theater, 6600 W. Maple Road in West Bloomfield.

According to publisher and licensee Samuel France, The Jewish Ensemble Theater has released The Diary of Anne Frank more than any other theater in the world, and has represented it for the past 29 years, mostly for school groups.