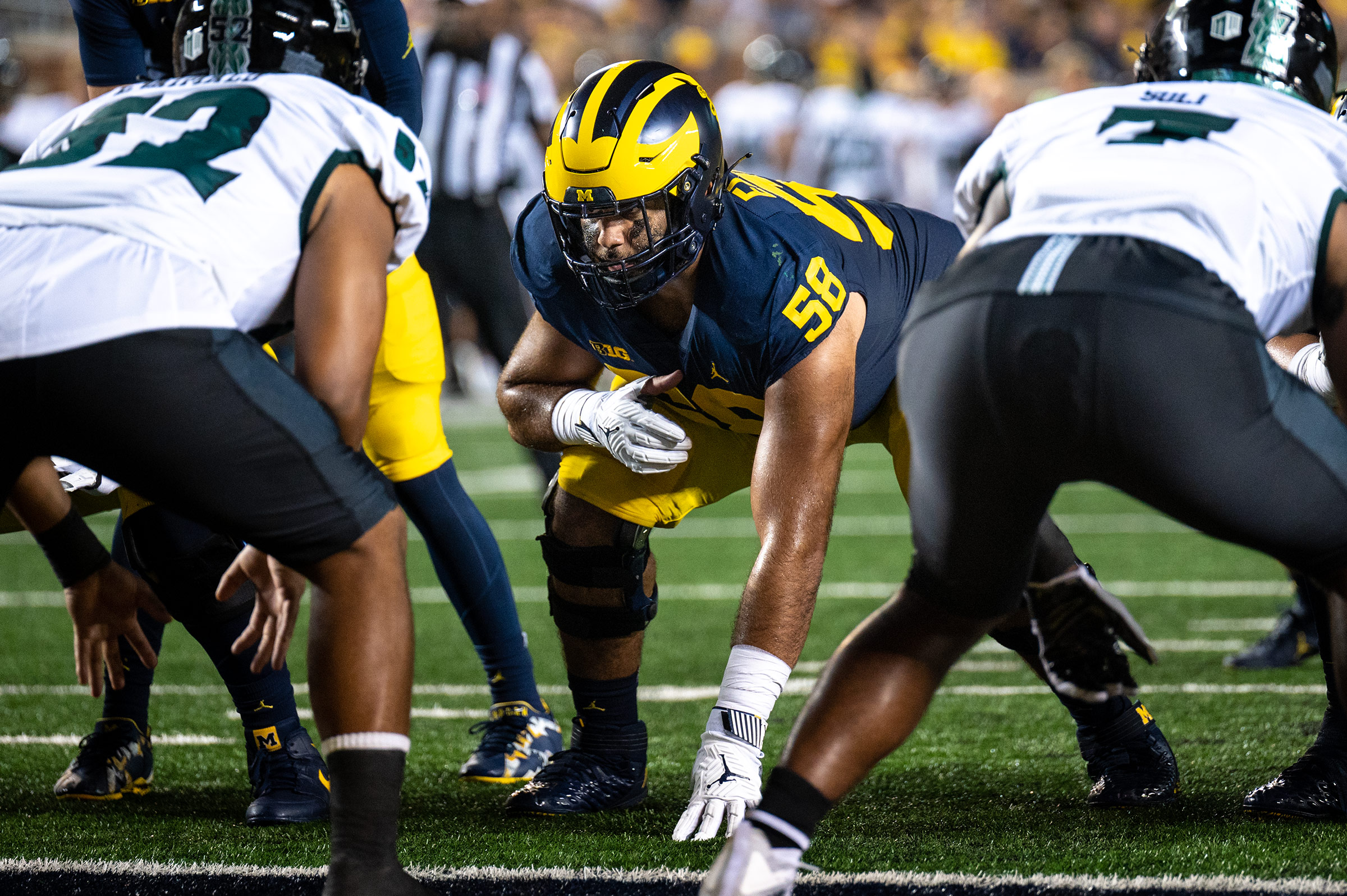 But he sets an example that everyone can’t help but follow.

“I’m not big on being chatty or loud…I’m just kind of me,” Smith told The Daily. “Some people strive for it, some don’t. … It’s just trying to do your best to steer yourself in the right direction and hold yourself accountable and do it for everyone around you. I think when you do it for yourself, it’s contagious.”

Talking to Smith, it’s easy to see why. His wisdom is beyond his years. When answering questions, he pauses to formulate the best answer. His words are always carefully chosen and his sentences are as precise as his low voice.

There’s a reason people look up to him because he’s the leader of the Wolverines’ defense. Some say it’s his work ethic, some say it’s his passion, and others will tell you it’s something else entirely. Whatever makes people want to follow Smith, that’s hardly the point.

“You want to be like Mazi,” Martens told The Daily. “They’ve watched him and seen his technique, his passion and his strength … you can’t help but get motivated.”

Martens coached Smith at East Kentwood, but it’s clear that Smith has the same respect at Michigan, not only on the field but off it as well.

There are many things to know about Smith. Some details explain why he is the way he is, while others simply add to his mythos. He loves food — wings in particular — and he doesn’t care about stardom, even if it has followed him throughout his football career.

East Kentwood High School football coach Anthony Kimbra had a lot to say about Smith and the weight of his words:

“He’s a pretty serious guy,” Kimbrough told The Daily. “There’s not a lot of goofing around, jokes, so when he has something to say, it’s usually pretty serious, pretty smart, and people listen.”

Smith does not fit the traditional football captain. He wasn’t born with the prowess he has today—he had to earn it in East Kentwood.

Kimbrough and Martens will tell you how much Smith has changed physically since they first met him around the eighth grade. However, at the same time, they will emphasize that he is still the same guy off the field.

For the East Kentwood Falcons, Smith has been as nuanced a leader as he is for the Wolverines, and it has been evident throughout their program. Of course, he gained even more recognition in East Kentwood, with Kimbrough even calling him a local celebrity.

Both Kimbrough and Martens laughed as they told stories about Smith; It was clear how much they cared about Smith – how much he meant to those around him.

This energy is another reason why people follow him.

And that’s easy to see when talking to Smith. He is not loud, but his words are strong.

Interspersed with thoughtful answers about the game, Smith talked about wealth, philosophy and his personal goals off the football field.

“I come from humble beginnings, in football and in life,” Smith said. “… after a while you start to understand that money can’t buy anything. You can’t buy happiness, loyalty, friendship for that. People think that it is possible, but in reality it is empty.

“When I look at life, I personally want to be complete.”

Smith identifies that the sense of satisfaction is much greater than material wealth or personal success. These things may be natural in his current path, but that’s not why he does it. In his eyes, being “complete” comes from the influence he has on others.

After all, what good is success without others to share it with?

He wants to be the best, yes, but Smith also wants everyone around him to be at his best. He doesn’t want to succeed on his own because it’s pointless for him.

“I want everyone to eat, you know?” said Smith. “Of course you want to be successful yourself, but to me personal success doesn’t mean much unless you pay it forward and help the next guy.”

In just ten minutes of talking to Smith, it was easy to see why so many people look up to him. His words border on the gospel, and Schembechler Hall is his cathedral.

The thing is, almost everything Smith says comes true. Smith’s rise hasn’t been quick, the growth curve hasn’t looked exponential, but now that he’s at the top – literally and figuratively. So is his unit.

Right now, Michigan boasts the best defense in the country by many measures — No. 1 scoring defense, No. 1 rushing defense, the list goes on.

That success starts with Smith.

In his role as a nose tackle, or “spear tip” as he likes to call it, Smith constantly eats up double teams like it’s his favorite food, his block destruction sets the tone, and he’s always in the right spot. He is the mainstay of Michigan’s top-ranked defense, and as such is at the forefront of a stellar season for his unit.

But then again, his influence doesn’t stop off the field. He leads through choice words here and there, but mostly through action. Just ask his teammates:

“The impact he has on our defense is a lot more than anyone could have imagined,” junior defensive lineman Chris Jenkins said Monday. “Without him, we would not be in this position at all. … (He) really inspires us to play better.”

Praise is not new for Smith. Kimbrough said it’s been that way since high school, and Smith has always appreciated it.

“Looking back, I spent my whole life preparing for these moments,” Smith said. “… In high school, my cousin told me to bring the culture I wanted to see here — the D-line. Try to show everyone the way.”

“I tell the young guys we’re going to turn this place into a U D-line, we already are, for real,” he said. “It just fills me with great joy and happiness and honor to say that when I was here, these guys looked up to me,” he paused to think.

“I left my mark, wherever you go, you want to leave your mark. That’s all I’m trying to do.”

Smith’s impact on the field is much like his leadership. It is quiet, silent and in your face, but always present. You can always feel it.

Smith molded Michigan’s defensive line in his own image, both in attitude and success. He’s definitely left his mark, and if you need to know what that means to Heen, you only have to do one thing:

Just listen to him.