The Russian war in Ukraine has reached 1 month, and the end is not in sight 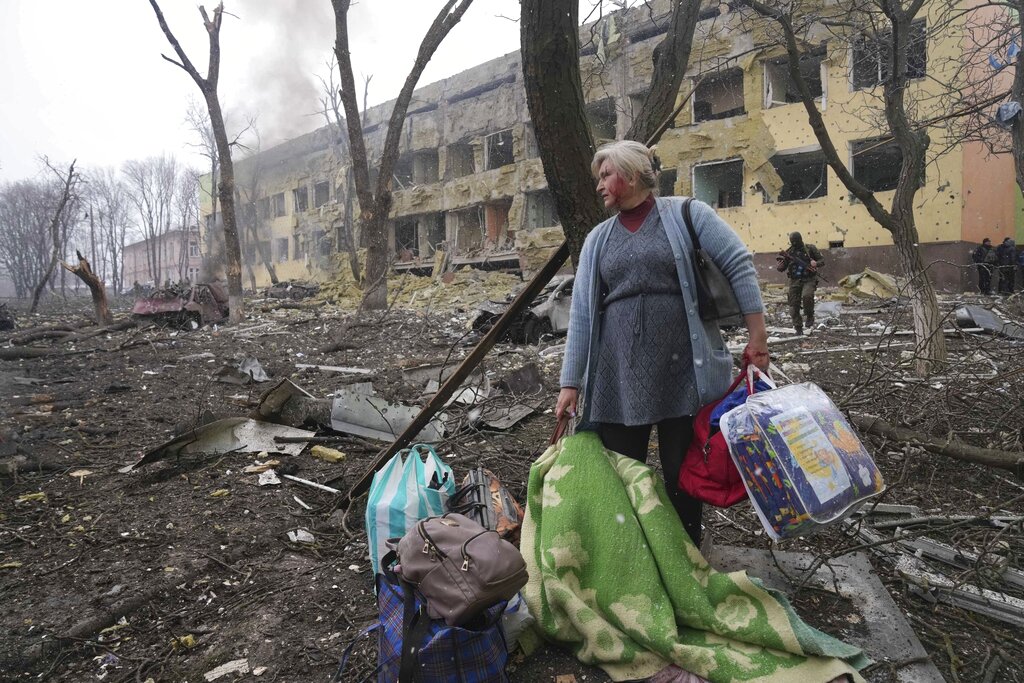 A look at the key moments of the conflict in a month:

THE ROAD TO WAR

In early 2021, the accumulation of Russian troops near Ukraine raised fears of an offensive. Moscow withdrew some of its forces in April, paving the way for the June summit between President Joe Biden and Russian President Vladimir Putin. However, their meeting failed to significantly ease tensions between Russia and the United States.

Updated building up Russian troops along Ukraine’s borders began in late October and by the end of the year had reached about 150,000 troops. From the very beginning of the increase in troops, Moscow has denied any plans to attack Ukraine, calling such Western concerns part of a campaign to discredit Russia. At the same time, he called on the United States and its allies to prevent Ukraine’s accession to NATO and to withdraw the alliance’s forces from Eastern Europe, the West’s demands were rejected as initial.

Then, on February 21, Putin sharply raised the stakes, recognizing the independence of pro-Russian rebel regions in eastern Ukraine. Insurgents have been fighting Ukrainian forces there since 2014, when a Moscow-friendly president of Ukraine was ousted by mass protests, and Russia responded by annexing the Crimean peninsula.

In a televised address on February 24, Putin announced the launch of what he called a “special military operation” aimed at demilitarizing Ukraine and eradicating alleged “neo-Nazi nationalists.” As he said, the Russian military unleashed a series of air raids and missile strikes about Ukraine’s military facilities and key infrastructure. Russian troops entered Ukraine from the south of Crimea, along the eastern border and from Moscow’s ally Belarus, which borders Ukraine from the north.

Putin argued that Russia had no choice but to act after Washington and its allies ignored its demand for security guarantees. Western leaders dismissed the allegations as a false pretext for the attack.

Russian military came to the capital of Ukraine Kyiv, located just 75 kilometers (47 miles) south of the border with Belarus, closes on the second largest city in Ukraine Kharkiv in the east and runs along the coast of the Azov and Black Seas in the south.

NewsNation poll: Americans want Russia to pay a higher price for the invasion

While Russia has stated that it targets only military facilities, air strikes and artillery strikes have been inflicted on residential neighborhoods, schools and hospitals across Ukraine.

The attack was particularly deadly in March:

– March 1 Fr. A Russian rocket hit the building of the regional administration in Kharkiv. murders 24.

– March 9, Russian air strike destroyed the maternity hospital in the besieged port of Mariupol, at least three were killed and 17 were injured.

– March 16 Russian bomb equated the historical theater in Mariupol, even after the Ukrainians sprinkled huge white letters on the sidewalk with the word “children” to show that civilians are hiding inside. Officials said hundreds of people hiding in the basement had survived.

– At least eight people were killed in a Russian air strike on Monday in a shopping center in Kiev.

Russia’s main destination in the south is Mariupol, a strategic port on the Sea of ​​Azov that was weeks under siege. The relentless bombing of the Russians turned entire neighborhoods into ruins and killed thousands, turning the city into an emblem of the suffering of the civilian population.

Thousands fled the city, part of a wave of refugees fleeing the country, according to United Nations officials more than 3.5 million.

RUSSIA WILL HAVE WESTERN SANCTIONS

Western allies responded quickly to the invasion with unprecedented economic and financial sanctions.

Tough measures, previously taken only against countries such as Iran and North Korea, led to the fall of the ruble, provoked a raid on deposits and caused panic among consumers.

He has constantly called on the US and NATO to declare no-fly zone over Ukrainethe demand of the allies rejected for fear that it might lead in direct confrontation with Russia and even provoke a global conflict.

Zelensky also asked the Western allies to give Ukraine fighter jets and long-range air defense systems. Russia has strongly warned the West against such a move, and discussions on possible supplies of Soviet-era fighter jets and air defense weapons from Eastern Europe to Ukraine have stalled if the West seeks to avoid dangerous escalation.

Ukraine has also asked the US and the EU to tighten sanctions ban on Russian oil and gas exports, opposed by many EU members who depend on Russia for much of their energy needs.

From the first days, the invasion did not go as Putin expected. After quickly moved to the outskirts of Kiev in the early days of the invasion, Russian troops soon lodged in the suburbs.

Instead of surrendering, as the Kremlin had hoped, Ukrainian troops fought hard against every sector, thwarting attempts by Russians to quickly sweep to other major cities, including Kharkiv and Chernihiv. Russia too failed to gain full control in the skies over Ukraine despite massive strikes on the country’s air force and air defenses.

Russian military convoys stretched for tens of kilometers (miles) along the highway leading from Belarus, becoming an easy target for Ukrainian raids and ambushes. In the east, Russian troops faced reinforced Ukrainian positions in the rebel regions and achieved only gradual results.

And, despite the maintenance of Mariupol and the rapid capture of the ports of Berdyansk and Kherson, the Russians failed to capture the key shipbuilding center of Nikolaev and push the offensive further west toward Odessa.

Western officials say Russian troops have been hampered throughout the war by persistent shortages of supplies, difficulties in obtaining food and fuel, and a lack of proper equipment for cold weather.

In early March, the Russian military reported the loss of 498 troops, then never updated the figure again. In stark contrast, NATO estimates on Wednesday that in four weeks of fighting 7,000 to 15,000 Russian troops were killed. By comparison, the Soviet Union lost about 15,000 troops over a 10-year period during the war in Afghanistan.

On the first day of the assault, Russian troops took control Chernobyl decommissionedwhere a radioactivity leak is still occurring as a result of the worst-ever nuclear disaster 36 years ago.

A few days later they captured Zaporozhye NPP, the largest in Europehit the training center and caused a brief fire that caused fear of disaster until it was put out.

And on Wednesday, the Russian military destroyed a new laboratory in Chernobylaccording to the Ukrainian state agency responsible for the Chernobyl Exclusion Zone.

The international community has expressed concern about the safety of both stations.

There were other threats.

March 21, g.p. ammonia leakage at a chemical plant in the eastern Ukrainian city of Sumy polluted an area with a radius of more than 2.5 kilometers (1.5 miles), but did not affect any civilians in the city with a population of 263 thousand, because the wind did not blow in this direction.

The Russian military has repeatedly claimed that Ukrainian “nationalists” harbored plans to blow up a nuclear or chemical facility and then blamed the Russians – warnings that Western officials fear could be a harbinger of such an attack by Russia.

Many in the West also fear that with the cessation of the Russian offensive, Putin may order the use tactical nuclear or chemical weapons scare Ukraine and bring it to its knees.

Even if his offensive stops and the Russian economy shudders under the impact of Western sanctions, Putin shows no signs of retreat.

Despite the fall of the ruble and rising consumer prices, Russian polls show strong support for Putin. Observers have linked the results to the Kremlin’s massive propaganda campaign and the dispersal of dissent.

Putin demands that Ukraine accept neutral status, renounce its application for NATO membership, agree to demilitarization, recognize Russia’s sovereignty over Crimea and recognize the independence of the insurgent republics in Donbas.

Zelensky stated this earlier this week that Ukraine is ready to discuss neutral status together with security guarantees that exclude any further aggression. But, according to him, the status of Crimea and the separatist regions can be said only after the ceasefire and the withdrawal of Russian troops.

Now Putin can hope to gain a bigger position and negotiate from a position of strength to strongly allow Zelensky to make concessions. Russian and Ukrainian negotiators say they are still far from preparing a promising agreement that Putin and Zelensky could discuss.