The artist creates the rental in honor of her father, a civil rights icon 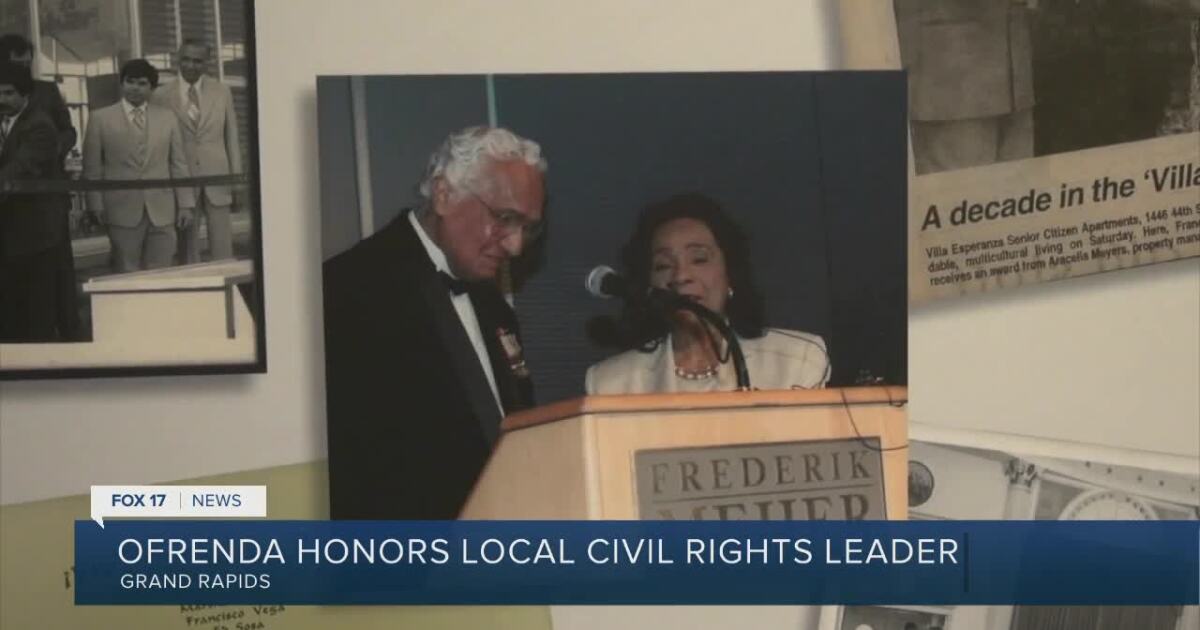 GRAND RAPIDS, MI. — When Margaret Vega’s father was living his last days last year, she was working on a painting called “Blue bird song.’ She would bring it to his bed and they would talk about it.

Now this is the central part of an rent she created the Grand Rapids Public Museum in his honor.

“He died, I was holding his hand. I took care of him in the last months of his life. Definitely a hero to me and, you know, big shoes to fill,” Margaret said during an interview with Fox 17 on Friday. “I wanted it rent to show the many dimensions of a man who was bilingual and bicultural, who struggled with these difficulties, these obstacles, and tried to help others.”

Who was Francisco Vega:

📌 Fought for civil rights together with Cesar Chavez
📌 Advised presidents from Kennedy to Bush Sr. on issues affecting Latinos
📌 Co-organized the 1st Spanish language festival/parade in GR in 1968

His daughter created an ofrenda in his honor at @GRMuseum // @FOX17 pic.twitter.com/4oE4ZiBAI9

The rentwhich is an altar created for deceased loved ones during a beloved Mexican holiday Dia De Los Muertasincludes more than a dozen photos, candles, fruit, flowers, military medals and other souvenirs.

Margaret said it took her five months to create, going through 30 boxes to put it all together.

“Probably my favorite part,” Margaret said before pausing briefly. “I don’t know, orange trees, maybe because he always had orange trees and he liked the smell. He was a man who appreciated everything.”

Francisco died at the age of 99, but Margaret kindly says, “100. He always liked to round up.”

One of the things he valued most in his long life, she said, was protecting the civil rights of Latinos.

“He fought for civil rights with Cesar Chavez,” Margaret said. “He worked with three or four presidents in Washington and created the first National Scholarship Association for Latino Students.”

According to his biography, which is printed on the wall near renthe traveled frequently to D.C. and advised Presidents John F. Kennedy, Richard Nixon, Ronald Reagan, Gerald Ford, and George W. Bush on issues affecting the Latino community.

Photographs of him and the presidents, letters from them were also included in the exhibition.

“He was interested in bilingual education before people even knew what it was,” Margaret said. “He fought for the right to vote and for the people of Latin America to really have a voice.”

She said her father was very passionate about equal rights and civil rights because he saw the lack of it in everyday life. He also experienced it firsthand when he was turned away from the draft in World War II because they wouldn’t take Mexican Americans.

“He was a knowledgeable and very fair man,” Margaret said. “He really felt that he was educated and it was his responsibility to bring these issues forward. You know, he was a very worthy fighter.”

Francisco was born in San Antonio, Texas and attended school in Mexico and the United States. He later enlisted in the US Army. And, according to his bio, he “was promoted to the elite team as a typist for his typing speed.”

Memorabilia from his time in the army are scattered throughout rentnext to photos of his wife, to whom he was married for 75 years.

Margaret hopes that everyone who sees rent thinks about the borrowed lights and their lives, because her father was a light for her.

“He was my mentor and friend as well as my father,” Margaret said. “Some of his words to me were, ‘make sure that when you leave, there’s a whole that says you were here at all.’ And I think he lived his life that way.”