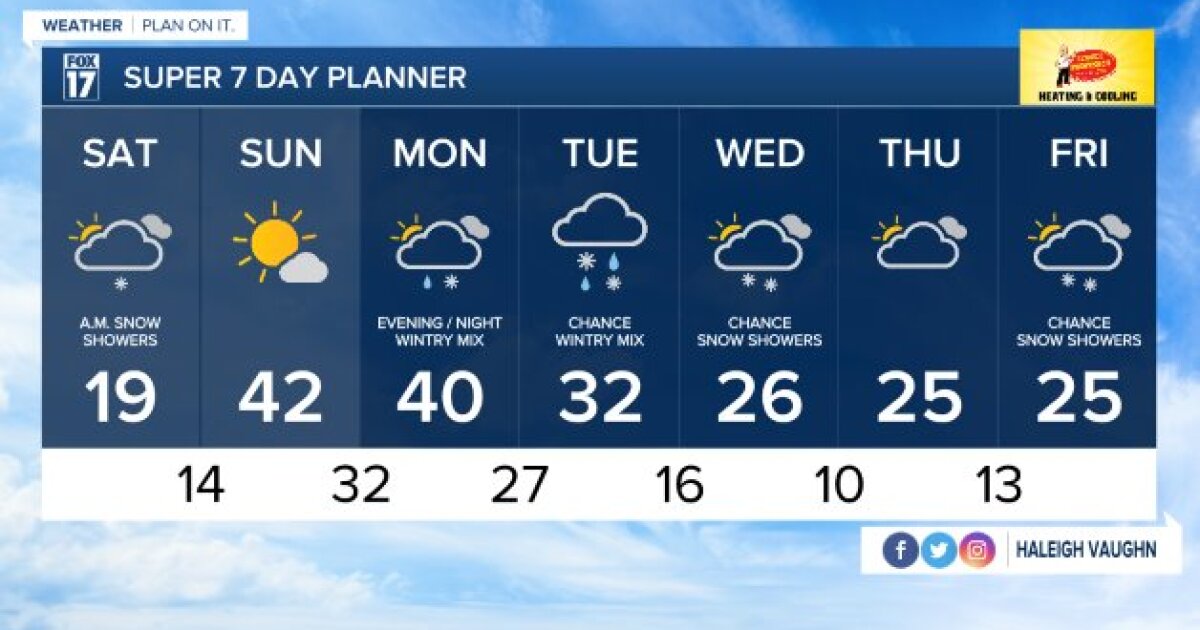 WESTERN MICHIGAN – FOX 17 meteorologist Hailey Vaughn’s forecast: Winter weather recommendations remain in effect for most of Western Michigan until 10 a.m. today. The following counties fall under this winter weather recommendation: Muskegon, Ocean, New York, Mekosta, Ottawa, Kent, Alegan, Barry, Van Buren, Kalamazoo, Berien, Cass, St. Joseph and Brunch. While isolated snowfalls remain this morning, the main problem with this system is wind. At the same time there is a LEAD FOR THE WIND. It is expected that this morning the wind speed will remain from 15 to 25 miles per hour, possible gusts from 35 to 45. Gusts of over 55 miles per hour have been reported since last night! During the day and in the evening variable clouds are expected, small gusts pass on the lake shore. The wind will subside tonight, before another strong wind tonight and Sunday! Gusts of wind on Sunday will range from 45 to 55 m / s, but this time southwest! This will allow the high temperatures on Sunday to reach below 40 degrees, with plenty of sunlight! Our next system is running next week, arriving late Monday night through Tuesday, with rain and possibly a winter mix when temperatures drop to the 30s and 20s. Be sure to stay tuned for later predictions.

TODAY: In the morning short-term snow is possible, otherwise in the afternoon partly cloudy. Maximum score in adolescence / below 20s. Wind west-northwest from 10 to 20 m / s. In the morning wind gusts exceed 40 m / s.

TOMORROW / SUNDAYA: Mostly sunny to variable clouds, strong winds and warmer temperatures! The maximum temperature of the 40’s. Wind southwest from 15 to 30 m / s, gusts from 45 to 55 m / s.

To learn about the weather in Western Michigan, go to the FOX 17 weather page.