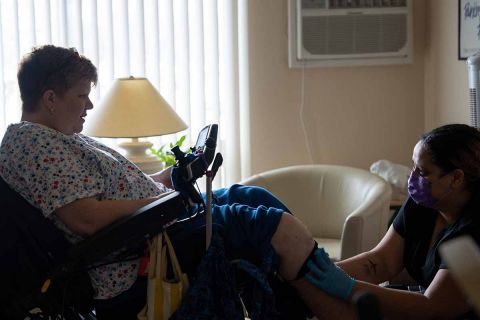 Now, back at her Riverview apartment, staff paid for with MI Choice funds visit her in the morning, mid-afternoon and evening, Yusif said.

They help with food and medicine, but otherwise Butler is mostly independent, sleeping in her own bed and watching Hallmark movies and Steve Harvey and His Family Feud in her favorite blue fabric chair.

“I love when I stop there and she’s in her La-Z-Boy chair and her feet are up and she’s relaxed in her own space,” Yousif said.

Without MI Choice, Yusif said: “I don’t know what I would do… I don’t want her to give up.”

The MI Choice program is available to people who are eligible for Medicaid and need it nursing home care — a definition that is usually based on a person’s physical and cognitive abilities, as well as health problems and any behavioral needs.

And while MI Choice may not appeal to everyone — some elderly Michiganders don’t want outsiders in their homes, for example — “the program has historically been very popular,” the state’s Wamsley said.

As has been well-documented, the pandemic has pushed health care workers out of nursing homes, hospitals and home health workers — with workers citing a range of challenges, from the fear of bringing viruses home to their families to job stress and the need to care for loved ones. .

Depending on Medicaid reimbursement rates, Compassionate Care and other providers are limited by how much they can raise wages for MI Choice employees and stay in business, she said.

Even as workers leave, she said, “margins are so incredibly tight that agency after agency” is dropping MI Choice services.

In cities, providers compete with other agencies as well as with nursing homes and other provider agencies for direct staff. Bridge experts said that in rural areas it is difficult for providers to hire caregivers who can travel long distances to someone’s home for a few hours of work.

Many workers choose jobs that they can do remotely, without the physical and emotional strain of direct care work, while saving on fuel.

This means that the agencies that supply the workers cannot fill the vacancies that arise.

“There are times when we can’t find a worker, say on a Thursday, so (a resident enrolled in the program) is not served during the day,” said Jonathan Mead, president and CEO of the Upper Peninsula Area Development Commission. , or UPCAP, is an agency on aging that coordinates services for the 15-county, mostly rural Upper Peninsula.

“The pandemic was the worst possible scenario for workers, but also for customers,” said Michael Dashlein of Michigan Seniors Initiativea legal and advocacy group for seniors in Michigan that studied barriers to home care in its The report is 52 pages long, released in September. “It blew up the problem.”

Despite the shortage of workers, MI Choice offers a wide range of assistance beyond direct care – such as mobile meals, home modifications, disposable medical supplies and long-term medical equipment.

“The front-line employee is an essential component of service — there’s no getting around it,” said Andrew Dabrowski, chief program officer. Senior Alliance, serving residents of western Wayne County. Still, he added, “we’re doing the community a lot of good by getting (residents) into this program, even if it takes a while to get them that direct caregiver.”

The situation has been looming for years, which makes it particularly frustrating, said UP’s Mead, who has been with the Territorial Agency on Aging for more than 46 years.

In a ten-year period, the state direct labor assistance grew by more than 19 percent, thanks in large part to the transition of baby boomers to retirement age. With the boom in home health and personal care products, the number of workers grew from about 100,000 in 2011 to about 120,000 last year, according to PHIa national advocacy and research organization for national health professionals and their clients.

“We saw this crisis 15 years ago, but we never tried to address this potential problem,” Mead said. “Now we have our backs against the wall.”

MI Choice saves money by directing public funds to mostly part-time care rather than 24-hour care in nursing homes with a range of health professionals, nursing staff, health services and administrators, which can cost )over $100,000 a year in Michigan.

stay at home or in the community through programs like MI Choice, according to 2020 AARP Long Term Services and Support State Scorecard.

At last count, the state spent just 31.5 percent of its long-term care budget on home and community services — nearly 14 percentage points below the national average of 45.1 percent, according to the scorecard.