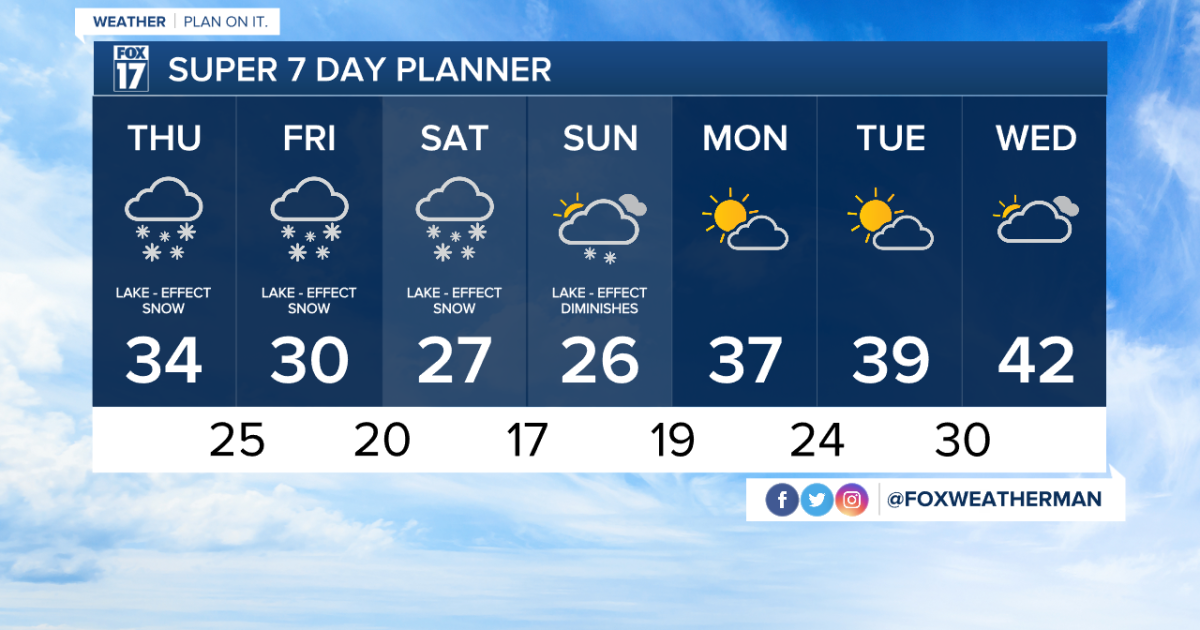 WEST MICHIGAN — FOX 17 Chief Meteorologist Kevin Craig’s forecast: Steady winds and cooler temperatures set in this morning as we started to fire up the lake effect snow machine. A WINTER STORM WARNING remains in effect until 10 a.m. today in Berrien and Cass counties. The snow in these places will decrease, and the heaviest snow will already pass there. Cooler air will produce blistering temperatures Friday and into the weekend with daytime highs in the 20s and overnight lows in the teens. This will likely result in heavier lake effect snow. Our forecast models show that winds will be mostly out of the west at this time, bringing snow to the US 131 corridor and even farther east. A WINTER STORM WARNING in effect until 7 a.m. Saturday in Ottawa, Allegan, Van Buren, Kent, Ionia, Barry, Eaton, Kalamazoo and Calhoun counties. Early reports indicate that between Thursday morning and Sunday morning, about 6 to 12 inches will fall. We remind you that these amounts are more than a 3 to 4 daily period! Overall, that’s about 2 to 3 inches of snow per day with heavier/sustained flurries now and then and lulls here and there. Isolated higher amounts are possible, especially along the US 131 corridor between Grand Rapids and Kalamazoo. A WINTER WEATHER INFORMATION in effect until 7 a.m. Saturday in Oceana and Muskegon counties, where snow totals for the period will range from 4 to 8 inches. A WINTER WEATHER INFORMATION in effect for Newayoga, Mecosta and Montcalm counties until 7 a.m. Saturday, where snow totals for that period will range from 3 to 6 inches. We slowly turn off that lake effect snow machine on Sunday, working on a dry level next week with temperatures rising into the 40s by next Wednesday. Don’t forget to stay tuned for the next forecast. Download the free FOX 17 Weather app for the latest video forecast!

TODAY: Cloudy, windy and cold. Lake-effect snow develops and lies throughout the day. About 2 to 4 inches will fall. Highs in the 30s. West-southwest wind 10 to 15 mph. Gusts exceed 25 mph.

TONIGHT: Cloudy and windy, snow continues. Another 2 to 3 inches will fall. Lows average into the 20s. West-southwest wind 10 to 15 mph.

FRIDAY: Cloudy, windy and colder. Snow is likely. Another 1 to 2 inches is likely. The maximum temperature is from 20 to 30 degrees. West wind 10 to 15 mph.

SATURDAY: Cloudy, windy and cold. Snow is likely. The heaviest will be along/west of US 131. Another 2 to 4 inches will fall. Highs in the mid 20s.

SUNDAY: Cloudy, windy and the coldest day of the week/weekend. Lake effect snow will gradually taper off throughout the day as drier air moves in. Highs will be in the mid-20s.

For the latest West Michigan weather, go to FOX 17 Weather.