Regents talk about the presidential search, the modernization of the CCRB and the Big House 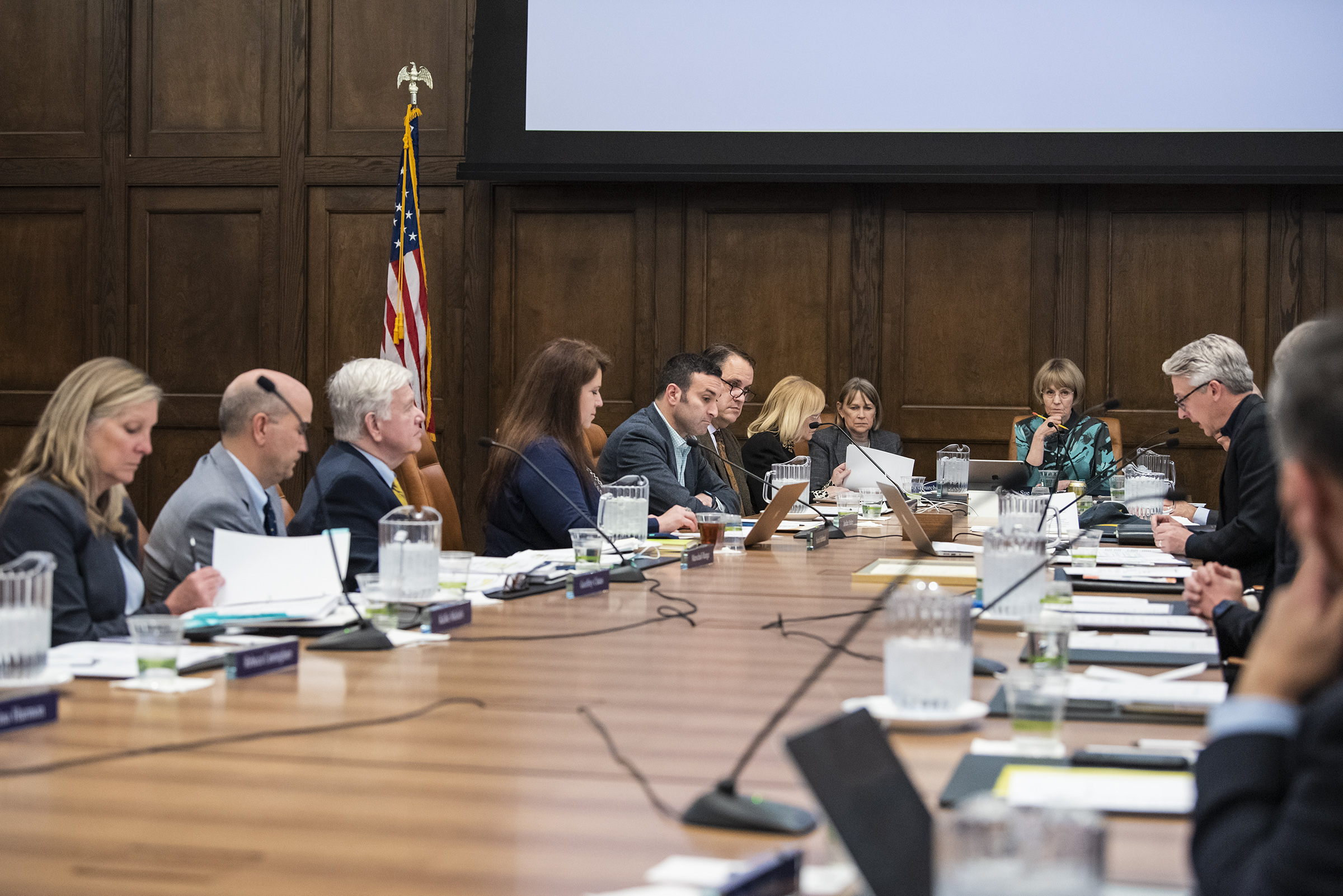 The University of Michigan held a meeting at the University Hall in the Ratven Building on Thursday to discuss progress in finding a new university president, renovating the Central Campus Recreational Building (CCRB) and upgrading the university’s sports facilities.

Interim President of the University Mary Sue Coleman began the meeting with an address to the newly created Coordinated Community Response Team (CCRT), which is designed to combat sexual violence at the university. The formation of the CCRT was included in the terms of the settlement a class action filed against University LSA Chairman Josephine Graham in May 2021. Graham argued that the university did not sufficiently protect students from sexual violence and said that the formation of the CCRT is a crucial step in addressing this failure at Press conference on Wednesday.

The regents also approved the dean of dentistry Lori K. McCauley as the next Vice-Chancellor of the University and President for Academic Affairs. McCauley will replace Vice Rector Susan Collins leaveswho will step down on May 15 to become the next president of the Federal Reserve Bank of Boston.

The council voted unanimously to award Collins Fr. Regent’s Certificate of Honor for service at the university. Collins thanked the board for the award, reflecting on the time spent as director of the university.

“Serving as vice-chancellor, especially in difficult times, was really a privilege,” Collins said. “It was also an honor for us to work with such great leaders at this university … It was a team effort and I believe that together we have come a long way.”

Collins then reported on how the university supports students affected by Russia’s invasion of Ukraine. Collins said the university has maintained contacts with students from Russia and Ukraine and has taken a number of steps to ensure the safety and security of education of these students.

“We responded by providing them with information about support services and taking steps to ensure that they could continue their education here, despite financial constraints and other difficulties in their home countries,” Collins said. “(We) will continue to monitor this situation and support our students in this very difficult time.”

March 15, University announced it will no longer make investments in Russia and will attract all current investments from 2009 and 2012 “as soon as possible”. The university currently has $ 40 million invested with an investment manager Russia partners.

Jeffrey Chatas, Executive Vice President and Chief Financial Officer, informed the regents of the university’s progress towards carbon neutrality, including the creation of a new Planet Blue dashboard, which monitors UM’s greenhouse gas emission levels and trajectory of reduction. According to Chatas, the university is on track to achieve its goals of sustainability and reduction of greenhouse gas emissions.

“I am very pleased to announce that the U of M aims to reduce both greenhouse gases by 50% by 2025, which is five years ahead of and above the United Nations Intergovernmental Panel on Climate Change … a guide to reduce emissions by 45% by 2030, ”Chatas said. “We are also working to instill in the university a culture of sustainability with justice as a core principle.”

Then the board discussed plans update Central recreational building of the campus . New features of the plan include a gym with three platforms and a notary with a pool for a circle, a pool for relaxation and a pool for recovery after a workout. Mike Widen, director of recreational sports, stressed the value of rebuilding the CCRB given its contribution to student well-being.

“It’s a really comprehensive facility built for the student experience,” Weiden said. “This is a shining example of the long decades of our campus’ commitment to the health and well-being of our students and the entire University of Michigan community.”

Regent Denise Ilyich (D), co-chair Presidential Search Committeegave information on the board’s search for a new university president and thanked for the level participation on campus in the process.

“I want to say how grateful we are for the activity and feedback we have received since the beginning of this presidential search process,” Ilyich said. “More than 1,000 members of the University of Michigan community filled out our survey with feedback.”

“First, it is important that the next president restores trust and accountability in the university community, managing honesty and eliminating past abuses and sexual crimes,” Ilyich said. “I was impressed by all the sessions, the observations of how I was heard, listened to and respected.”

The regents then allowed public commentators to report what they would like to see in the next president of the university. Hafs Tout, a law student, said she wants a president who will listen to students and solve campus problems.

As a university student, Tout was a member of the Central Student Government (CSG) and a member of it. adoption of a resolution in 2017 asking the board to get rid of companies based in Israel in response to the Palestinian occupation. The council voted in favor reject this resolution in less than a month. Tout said she feels the university’s recent announcement pull his investments in Russian companies have demonstrated hypocrisy in light of his previous attitude toward the sale of Israeli companies.

“A statement issued by the council in response to the resolution said: ‘We remain committed to the university’s long-standing policy of protecting the fund from political pressure,'” Tout said. “But here we are in 2022, when the council and the interim president openly, without hesitation and swiftly make decisions and changes in the endowment in response to, arguably, political situations around the world that fully deserve such an answer, but which directly contradict this supposed commitment protecting the endowment from political pressure ”.

Ilyich also expressed concern to the participants of the meeting, who commented on this difficulties that people with disabilities face the opening of doors on campus.

“We are committed to setting priorities and ensuring the automatic opening of doors in all our public buildings right now,” Ilyich said. “We have 50 buildings that need this; We already have several hundred automatic doors that open at the front door, but if there are certain doors that are difficult to open, please email (me) … or to the Vice President for Facilities and operation ”.

Ilyich said the new map of all available tracks in the buildings will be completed in the summer and will be available to the public in the fall of 2022.

Arun also asked the regents to consider an increase CSG student fee, which currently requires all students to pay $ 9.19. Arun did not specify how much she was interested in receiving.

“We implement repetitive programs that are widely used by students, such as free subscription for The New York Times and the Wall Street Journal, the GRE, MCAT and LSAT test preparation program is available at discounted rates, subsidized transportation to and from the airport for long breaks, and substantial student organization funding, ”Arun said. “Unfortunately, given that our current student fee is $ 9.19, these programs are becoming ineligible for the CSG budget. Therefore, when it comes time to vote for the new budget, I urge you to vote for the fee increase. “

The regents then voted in favor of $ 41 million update to the Big House, including an upgrade to the $ 8 million production hall – a space that controls audiovisual impressions for several UM sports grounds across campus – where you can play field hockey, hockey, basketball, soccer, soccer, indoor tracks, baseball and softball.

Additional upgrades include replacing the north and south video cards at Michigan Stadium for $ 12 million and replacing the audio system for $ 5 million. Other upgrades to the Big House include additional security measures for $ 4 million and a fee for infrastructure, site work and design for $ 12 million. According to Rob Rademacher, Chief Operating Officer of UM Athletics, the source of funding will be gifts from the Athletics Department, limited for capital improvement.

“I also just want to repeat a little bit of my experience in sports and stadiums, and I can’t start telling you about improving the scoreboard, infrastructure and new technology around them as much as it improves the fans’ experience,” Ilyich said. “It will be like day and night.”

During the public commentary at the meeting, several commenters expressed a desire to increase resources for the physical and financial well-being of students.

Elaine Lande, a lecturer in the integrated research program, said the university needs to increase accessibility menstrual cycle products on campus. In late January, the university announced that 670 toilets on the main floor would receive free menstruation funds in all teaching and student buildings.

“I’m the X-er generation,” Lande said. “I learned a lot from my students. They are not ashamed and are not ashamed to speak of their periods as my generation and former; I follow their example. Although it may be difficult for someone to understand the need for women’s products in bathrooms, I compare it to the fact that someone defecates and then realizes that there is no toilet paper, or, in this case, does not expect the availability of toilet paper ».

Representatives of social work Matthew Dargay and student Arie Davy Payment for accommodationtold students of the School of Social Work worth paying for for the locations in which they must participate to graduate. The organization wrote Fr. petition in January, outlining its concerns and emphasizing that the university provides scholarships to students of other graduate programs, the practice they claim should be expanded to include social work students.

“The nine hundred and fourteen hours I work on the internship are required to get a master’s degree,” Davy said. “I do the same job as paid employees in my agency, but I am not paid. Social work students are in a financial crisis. “

Dargai reiterated similar sentiments and pointed out that students involved in public policy and law at the university receive compensation for internships, while students of social work still do not.

“We congratulate the University of Michigan for paying scholarships to public policy students and law students who have decided to do an internship at public companies,” Dargai said. “And we believe that social work students should be treated similarly.”

Daily Staff reporters Anna Fifelsky and Samantha Rich can be contacted at afifelsk@umich.edu and sammrich@umich.edu.