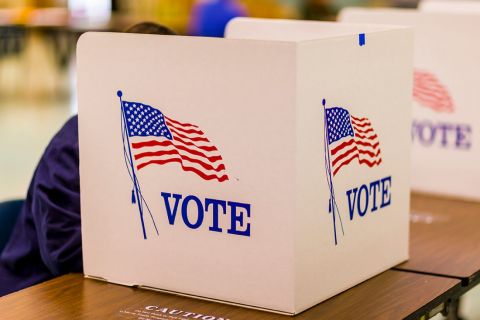 “It’s a big unknown,” said Witt, who added that the secretary of state and the state legislature will need to work out answers to questions about the process and cost.

But Michigan voters won’t know the answers to those questions until they decide whether to approve the proposal.

Witt noted that since many other states, such as Illinois, Georgia and New Jersey, already offer in-person early voting, Michigan “doesn’t have to start from scratch” and can look to its early voting models for guidance.

Paul Groenke, a political science professor and director of the Elections and Voting Information Center at Reed College in Oregon, said the “devil is in the details” of early voting, but overall the expansion increases voter turnout.

“Early voting is widely popular,” Gronke said. “When voters have a choice, they go for it.”

Michigan already allows early in-person voting up to 40 days before an election, when voters can go to their local clerk’s office — or, in some cities, an associated office — to apply for an absentee ballot and submit an application. Proposition 2 would give voters a full work week and two days off go to the polling station and cast a ballot in the same way as on election day, including entering it into the tabulator yourself.

Macomb County Clerk Anthony Forlini says that while he believes early in-person voting should be an option for voters, he is concerned about how it will be handled by townships with fewer resources.

“For smaller communities, most clerks are part-time, and now they have to work longer hours,” Forlini said.

Laura Eisele, clerk of Handy County and the Village of Fowlerville in Livingston County for 22 years, oversees the election for 6,600 voters and is concerned about how she will staff the polls during several days of voting.

“According to the current law, the township will have to staff this precinct for early voting with at least three people,” Eisele explained. “That won’t leave anyone to cover breaks or food … so it’s likely going to take five people every day.”

Personnel costs could be “in excess” of $10,000, Eisele estimated, noting that it is not yet clear what the total cost of opening an early voting precinct will be.

New Jersey implemented nine-day early voting last year and offered it for both the 2021 state election and the 2022 primary. Estimates for the implementation of the optionwhich included the purchase of thousands of electronic ballots in each district, were about 80 million dollars, with the state footing a significant portion of that bill. The state’s most populous county, Bergen County, spent $500,000 run early voting last year. Now that it’s up and running, the bill is about US$90,000 for the Bergen election.

Curtis Fernandez is the regional director of Asian and Pacific Islander American Vote, a partner in the Promote the Vote 2022 coalition that collected more than 600,000 signatures to put the proposal on the ballot in Michigan. He said Promote the Vote organizers have heard the concerns of local election officials.

“We’ve been talking to local clerks about how best to implement early voting given the diversity of municipalities in Michigan,” Fernandez said. “For officials who already have a significant number of in-person absentee voters, some of whom currently work with associated secretaries’ offices, we expect costs to decrease because early voting is more streamlined compared to in-person voting.”

Proposition 2 would allow single county municipalities share the early voting sitewhich would allow these local authorities to share costs, but the proposal does not specify how many jurisdictions could be combined in one constituency – another question that will have to be answered later.

Elliot Fulmer, an assistant professor of political science at Randolph-Macon College in Virginia and an expert on voting behavior, says that while more voting days will give voters more time to cast their ballots, its effect on turnout also depends heavily on the number of votes cast. sites available to voters.

“A significant number of states have had early voting for decades,” Fulmer said. “Most election officials say early voting makes for better administration.”

The Michigan Secretary of State’s office, through a spokesman, declined to comment on any potential plans for funding or early voting if Proposition 2 passes. Organizers behind Promote the Vote also declined to offer any ideas about how Michiganders might pay for early voting.

After the costs are covered, many election officials and experts say early voting has several benefits, both for voters and themselves. Spreading out the in-person voting for nine more days would give clerks a chance to spot problems, Fulmer said. During early voting, for example, clerks will make sure their machines are functioning properly and their workers are properly trained to use them, which can prevent surprises and disruptions during voting on Election Day.

Brown said that if the legislation passes and Oakland County is asked to provide one of the polling places for in-person voting, her office is ready to step up.

“I would be all for it,” Brown said. “People are already on other matters, but we have one [two] tabulators”.

Like most local officials and clerks interviewed by Votebeat Michigan, Brown says he doesn’t know how much the extra voting days will cost local governments or whether the state will help fund them. She said at this point, everyone is just waiting to see what happens with the Nov. 8 measure.

“We’ll go from there,” Brown said. “We never know what lawmakers are going to do.”

Other clerks also welcome the changes, but worry about specific logistical challenges as they await details.

Livonia Clerk Susan Nash says early voting will mean more work for clerks opening and closing polling places because the voting tab will be posted over several days instead of just once on Election Day. Nash takes care of security for these tabs – it’s been a problem ever since five tab violations were reported in Michigan last year — during the nine-day early voting period.

“There’s going to be a whole new world of security information,” Nash said. “I don’t know if we’re going to close [the tabulator] every night.”

Hamtramck Clerk Rana Farage, who oversees voting for 13,000 constituents, says she plans to hire more staff if the proposal is passed. She also believes the change will require more work to produce multilingual ballots in her town, which are printed after the English ballots are delivered.

“We will have to work to get multilingual ballots sooner,” Farage said. “We offer three separate newsletters in English, Arabic and Bengali.”

The proposal made it onto the ballot even after two Republicans on the State Board of canvassers blocked the offer in August through a deadlocked vote along party lines. Republican council members voted not to certify the petition after an opposition group challenged the wording of the ballot on Proposition 2. Michigan Supreme Court abolished the board of agitatorsdeciding on September 8 that the proposal should be considered by voters.

Longtime voter and Detroit resident Steven Singleton says he supports the provisions of Proposition 2 and plans to vote for it, especially the loosening of ID requirements and expanded voting.

“I like the nine days of early voting because it allows everyone to vote,” said Singleton, a pastoral assistant for Catholic churches in metropolitan Detroit. “Sometimes people can’t take off work, find a babysitter or maybe make a doctor’s appointment, so they miss voting that day because of commitments.”