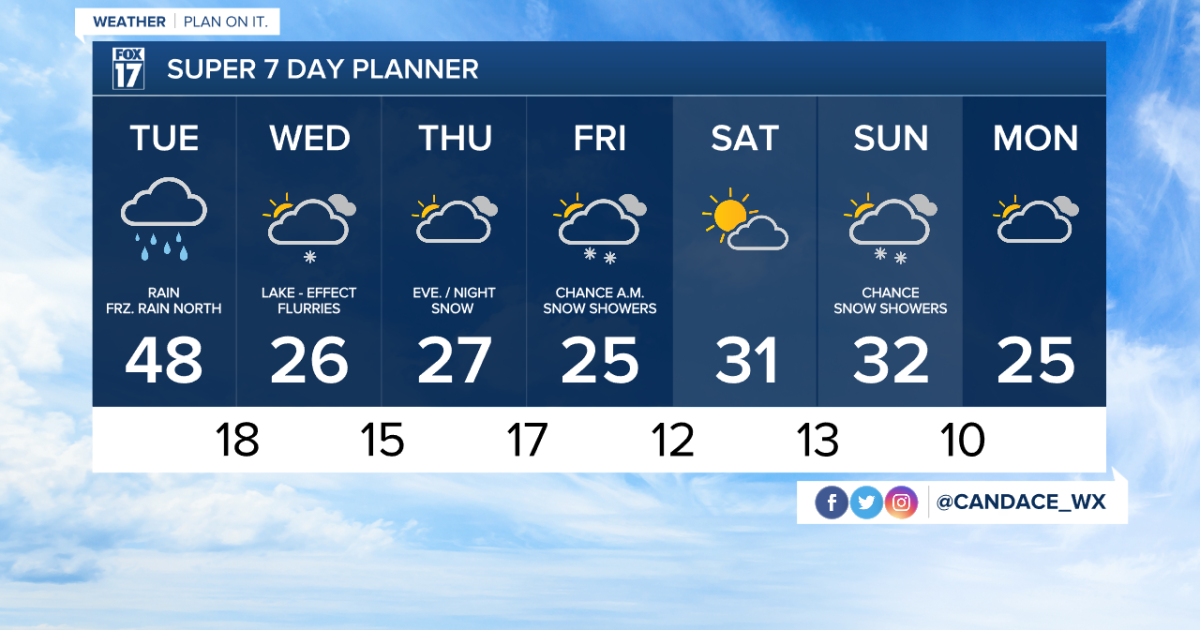 WESTERN MICHIGAN – FOX 17 meteorologist Candas Monacelli predicts: ice jams continue to be a concern for localized floods, especially along the Grand River in Comstock Park and Robinson Township near Grand Haven. This morning is expected mostly light rain and then north of I-96, where there is colder air in this system. We could see the accumulation of ice from ten to a quarter of an inch, which led to a difficult journey. WINTER PARAMETERS Operate from Tuesday morning to noon in the counties of Newgate, Mekosta, Ocean, Moncalm, Ionia, Kent and Muskegon. Along and south of I-96 we will see mostly full rain, ranging from half an inch to three-quarters of an inch until Tuesday night with some possible thunder. High temperatures drop to the 20s behind this system, leading to cloudy, cold and dry Wednesdays before light snow is possible from Thursday night to Friday. Get together, be safe and make this week great!

TODAYA: Mostly cloudy with rain around and south of I-96 to winter mix, mostly freezing rains around and north of I-96. Variable wind. Slight accumulation of rain and possible accumulation of ice, making it difficult to move. Maximum 30s in the north and 50s in the south.

WEDNESDAY: Mostly cloudy, possible early in the morning. The maximum temperature in the mid-20s.

Thursday: Mostly cloudy, snow possible in the evening. Maximum temperature in the mid-20s.

To learn about the weather in Western Michigan, go to the FOX 17 weather page.