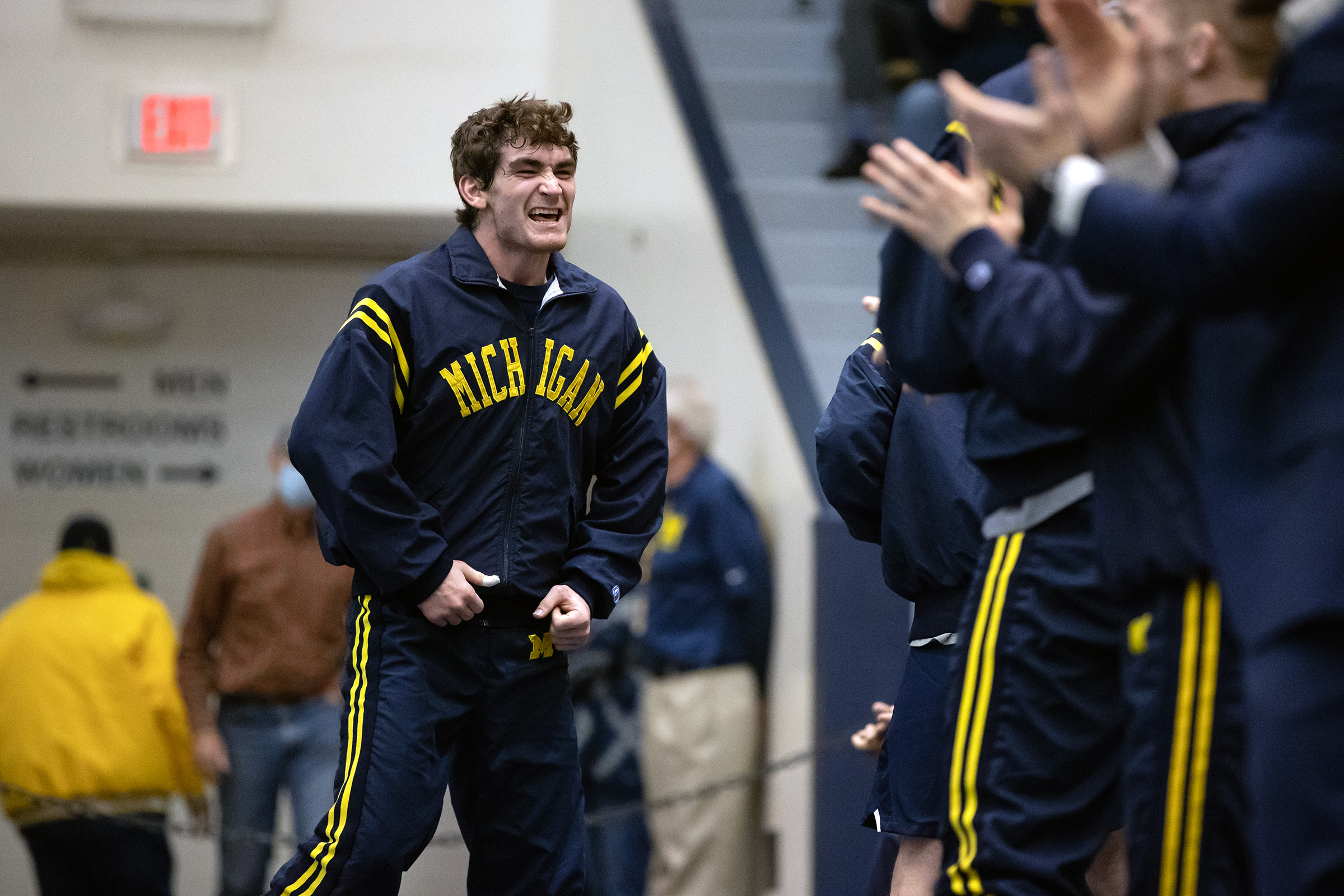 Michigan sophomore Joseph Walker, a redshirt sophomore from Michigan, was down 2-0 early in his match in Sunday’s dual after striking out his opponent in the second period. After starting from the bottom in the third period, Walker scored an escape point, scored 2 points and earned a 5-2 decision.

That conditioning and toughness shown by Walker were a microcosm of No. 6 Michigan’s (3-0 overall) wrestling team’s 38-6 victory over Columbia (0-2) at Cliff Keen Arena, where the Wolverines took 9 of 10 dual matches .

Michigan entered Sunday’s doubleheader with back-to-back wins. The Wolverines were back at home for the first time this year and were eager to get off to a fast start in front of a sold-out crowd.

“This team did a great job from our first dual meet to our second dual meet and this one, making the adjustments we identified as a coaching staff,” Michigan coach Sean Bormette said. “Tonight we wanted them to fight with a lot of energy and intensity right after the whistle and trusting our conditioning. I think they did a great job.”

Bormet was right. The Wolverines had a very clear game plan and they stuck to it and won because of it.

Michigan got off to a quick start with convincing wins by redshirt junior Kurt McHenry in the 125-pound match and No. 5 Dylan Raguzin in the 133-pound match. McHenry controlled the match and won 15-7, and that intensity led to a dominant 20-5 technical fall of Raguzin. Raguzin had six takedowns, a reversal and eight near fall points. Then in the 141-pound bout between Wolverines redshirt junior No. 12 Cole Mateen against Columbia’s Kai Owen, Michigan scored the first of two pins in the overall dual. Mattin was pinned just 1:08 into the first period, his second fall of the year.

“Right away I just want my offense going,” Mattin said. “He presented me with a situation, I just took advantage and I wanted to finish it early for the crowd and get them excited.”

Two more ranked Michigan wrestlers were sent to the mat from this quick strike. In his 149-pound match against Richard Fedalen, No. 21 Chance Lamer had three pinfalls, including two in the third period. No. 3 redshirt senior Will Levan made a crucial first-period one-leg takedown in the 157-pound match, leading him to a 6-3 victory. Those scores, a reflection of the Wolverines wearing down Columbia, extended their overall lead to 22-0.

Despite the overall success, Michigan suffered its only loss in its next bout against Columbia when Zach Mattin fell to No. 10 Joshua Ogunsanya and won by fall to take the 165-pound bout and close the gap to 22. -6.

But the team responded with grit, and Walker mounted a thrilling comeback to defeat Columbia’s Lennox Wolak 5-2, putting the Wolverines up 25-6 and all but sealing the victory for Michigan.

“We preach a lot, strong checkmate returns, and it takes a lot out of the opponent,” Walker said. “Every time I put it back, a little bit came out, a little bit more. So I just kept grinding and kept going forward and it paid off.”

The effort lit up Cliff Keen Arena and carried over into the rest of the matches. Graduate No. 11 Matt Finesilver recorded multiple takedowns to easily win a major decision against Jack Waymeyer 9-1. Redshirt sophomore Brandin Yatuma’s 197-pound matchup against Javen Jover sounded similar to Walker’s matchup, with Yatuma fighting back from an early 2-1 deficit to win a 4-3 decision for his first collegiate victory and another display of Michigan’s conditioning.

“This team that we have, as well as the freshman, is a very hard-working team,” Bormet said. “They’ve been training really hard and consistently this fall and they’re a team that’s in really great shape and the hard work is paying off. … These guys are really starting to feel like they’re in great shape.”

In the final match of the day, Michigan’s No. 3-ranked 285-pound heavyweight, Mason Paris, pinned Columbia’s Dan Conley for the fifth time of the season to complete the Wolverines’ resounding win.

Michigan will look to carry that momentum into December’s Cliff Keen Invitational in Las Vegas and continue to show its grit and toughness in a deep and challenging field.