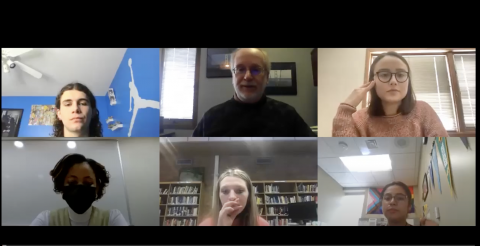 The next day only eight of the 30 students returned to class. “It’s just for me that I don’t think I’ll ever forget,” said Cholet, now a senior. “It’s like the kids were radioactive … They needed to get out of there immediately.”

It’s been a long two years for the 2022 Michigan High School class. Students had just tasted high school in the first year, but then the COVID pandemic turned the spring of the second year. And the younger and older years felt disconnected, difficult and sometimes very sad.

Cholet was one of four high school graduates – the rest were from Novi, Grand Rapids and Hazel Park – to attend a Zoom session with Bridge Michigan to discuss their experiences. Video chat can be found here.

All four students became infected with COVID-19 at some point. Three family members or someone close to them died or was hospitalized from the virus. They are all planning to go to college and said they hope their next chapter will have less doubt and more consistency. But they also learned life lessons that they believe will benefit them in the future.

“I think I’m much more grateful and aware of the things and people that are in my life,” said Nalia Moncryffe of Novi High School.

Attempt to learn during the “unknown”

In the spring of 2020, when the virus first hit, K-12 schools were closed and ordered to move to some form of distance learning as COVID-19 evolved from a distant headline into a problem that affected all Michigan parents, students and teachers.

In Chloe Heron of Hazel Park High School and Ben of TC West the spring sports seasons have been shortened. Ben used to go to lacrosse after school, but instead found himself at home, he had more time. Chloe’s softball team also didn’t play.

When schools for teens began to close, the spring break lasted longer than usual. But as time went on, virtual learning became the norm, staying focused was getting harder, and distance learning became a routine.

For Chloe, she woke up every morning, making coffee, brushing her teeth and sitting at the table.

“And then two weeks later it just happened again,” she said. “I did the same thing every day, and I needed to change, and that’s when I just woke up five minutes before class and just grabbed a computer and sat on the bed.”

There was also the anxiety that came with the little-understood virus. From mid-June to the end of the 2020 football season, Ben rarely saw his grandparents because he didn’t want to expose them to COVID-19 by accident.

“I think it was a lot unknown,” Ben said. “And I would say some fear of this unknown. And my grandparents live here and obviously (I) don’t want them to be exposed to COVID at all, I don’t want me to go to school, give it back to them. So I would say it’s more of a fear that you don’t know exactly what’s going to happen, or exactly, you know how bad it is going to be. ”

At Ben’s school, there were many transitions between virtual learning and personal pursuit.

Jackie Calderon of the CA Frost Middle High Academy of Environmental Sciences in Grand Rapids said she wants to work part-time and has her mother’s permission. But in the end she waited a year because nothing felt safe.

Ben said that at the beginning of virtual learning it was easy to stay involved, but over time he became less and less motivated. He said his classes went from hourly to 40-minute.

What actually happened during the classes has also changed. Jackie said that in the world of virtual learning practical experience was rare.

For Nahlia it was not only the type of work but also the intensity.

“I think I got a lot more work online,” Nakhla said. “I just felt like I got a lot more work in many of my classes. Sure, in my junior year I took harder classes compared to my sophomore year, but there was a feeling that the work was piling up and I just started disliking school, and once I got back (to class), it was almost like a “yeah” moment , like “Oh, that’s how it was before.”

Cope with the loss

In February 2020, before COVID-19 spread across Michigan, Jackie had a friend who died in a fire.

“I feel like the pandemic has started and no one has been able to grieve it properly,” she said.

She said the anniversary of her friend’s death was still very difficult, and the experience pushed her to value her friendship more.

Others noted the great role played by the health of their grandparents in their pandemic lives.

Nalia said she considered herself “very lucky” but two of her great-grandparents fell ill during the pandemic, and because of COVID’s security measures she “couldn’t be around them the way I wanted to”.

She lost them in four months to each other.

Just before the pandemic, Chloe’s grandmother had a stroke. When her grandmother returned home, Chloe could not visit because she did not want to put her at risk. It happened just when her school switched to online learning.

“I was struck by it all at once,” Chloe said. “But that was something I could work through.”

Four seniors said they are confident that experiencing a pandemic in high school will affect their future lives.

Jackie’s family spent the December 2020 holidays sick of COVID-19. Instead of a joint Christmas dinner, they sat in separate rooms. So, Christmas 2021 the family celebrated in Frankenmouth.

“We can’t act as if (the pandemic) didn’t happen, we need to appreciate that we’ve got each other now, and go out and enjoy what we have,” Jackie said. “And so we definitely look at things from a more appreciative point of view and as if tomorrow won’t be.”

The elders noticed how some of their peers coped with pandemic isolation. Nalia and Jackie remember how some classmates bragged about how they were able to cheat on classes and tests online.

The dates were also different. Jackie said she noticed that some students are in no hurry to date, and Nalia said she was surprised at how quickly people enter into relationships.

It seems to me that making friends has become a lot easier and just talking to people because I feel like we’ve all hungry for social interaction after going to school (online) and I just feel like we’ve all gotten a lot bolder in in this sense and more social; at least in my class, ”said Nahlia.

Getting ready for the future

Nalia said the last couple of years have felt like one big “question mark” when “we really don’t know where things will go next”.

“And that’s a big question mark. So we’re just hoping for a little normalcy, but it’s just fear of the unknown and ignorance of what awaits us. ”