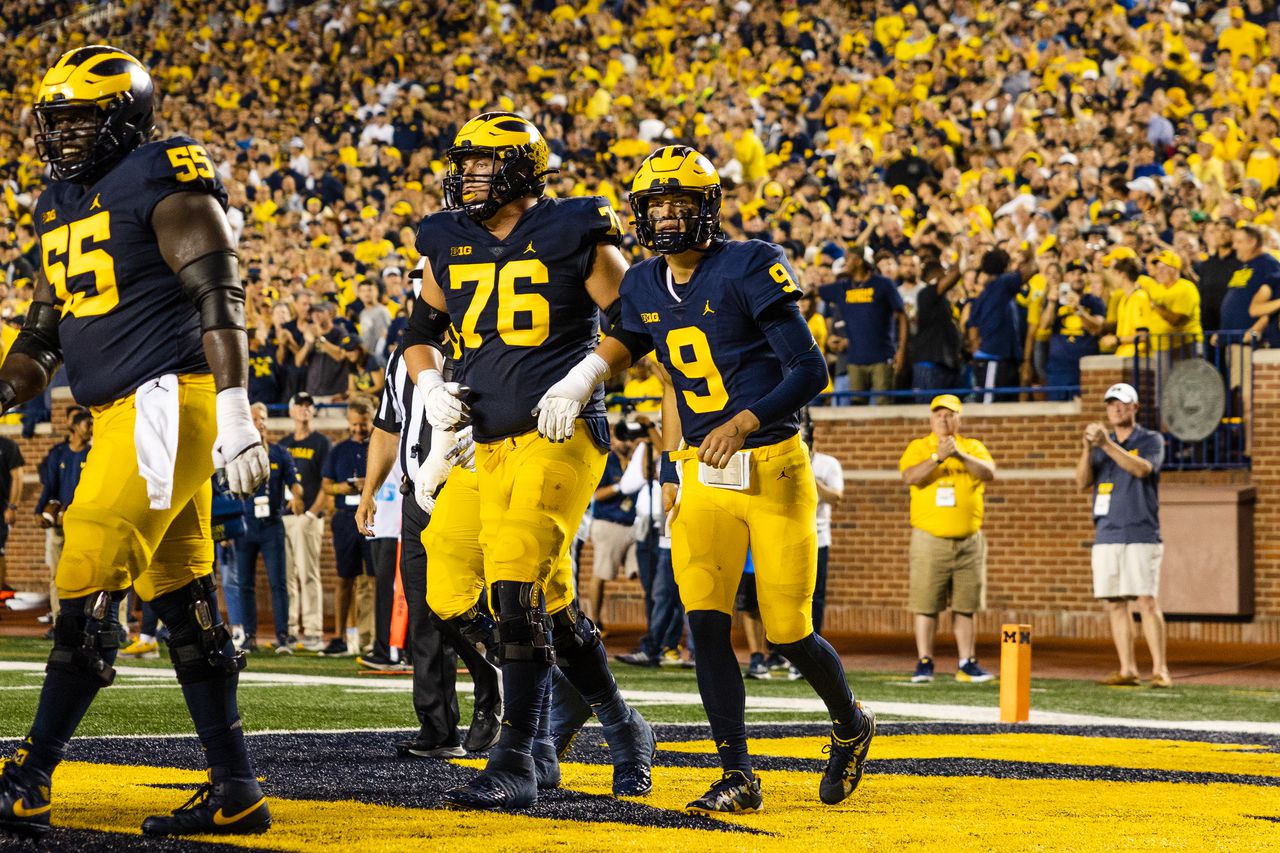 ANN ARBOR, MI. — Michigan will (finally) be able to play some big football this weekend.

The fourth-ranked Wolverines host Maryland in their Big Ten opener Saturday afternoon at Michigan Stadium (noon, FOX), and the Terps’ high-powered offense is expected to be a test of sorts.

How great is that? This is still up for debate. Michigan is currently a 17-point betting favorite in the eyes of the oddsmakers, and a three-goal margin in conference play is a big deal.

If you’ll recall, Michigan had little trouble handling Maryland last year, winning 59-18 in College Park while getting production from all over.

They’ll look for more of that on Saturday when Taulia Tagavailoa and a talented group of receivers come to town.

Here’s our weekly look at the Michigan injury report and the projected Wolverines pitching depth chart.

History: 4 things we think we know about UM football after 3 games

OL Trevor Keegan – Michigan’s starting left guard sat out last week’s win over Connecticut with an undisclosed upper-body injury and did not return. Head coach Jim Harbaugh listed Keegan as probable for Saturday’s Big Ten game, suggesting the move was more of a precaution. If he’s available (and it sounds like he should be), Michigan will likely have all five starters up front.

OL Carsen Barnhart — The team’s top backup lineman was sidelined against Colorado State with a sprained ankle and missed wins over Hawaii and UConn as Harbaugh declared him “somewhere between” questionable and probable. That suggests a return is close, giving Michigan some depth at tackle (or linebacker) in case the group gets hurt again.

RB Donovan Edwards — There was a bit of word on the Wolverine backup this week, suggesting his status is up in the air against Maryland. He sat out the win over UConn with an undisclosed illness, but he was active and walking the sidelines. This could very well be an in-game decision.

L. B. Nyhai Hill-Green — The sophomore inside linebacker has yet to play this season as he recovers from a soft tissue injury. Hill-Green prepared for the game against Hawaii believing a comeback was imminent, but he didn’t progress the way Michigan’s staff wanted him to. If ever there was a time for his return, it’s this week.

QB Cade McNamara – What a terrible last couple of weeks for McNamara, who has been going from starter to reliever for at least the next couple of weeks. The senior quarterback took a hard hit and fell awkwardly after a pass in last week’s win over UConn, then hobbled off the field and never returned. Harbaugh and the staff ruled him out of Saturday’s game, and there’s a good chance he’ll miss next week’s game at Iowa as well.

Quick note: We’ve been asked to confirm a rumor on the bulletin board about a season-ending injury to the starter, but we’re unable to do so. If there is something serious, look for more clarity this weekend.

Notes: JJ McCarthy is the starter moving forward, and rightfully so. He put up effective numbers again last week against UConn after playing just two-plus quarters. Look for McCarthy to play more this week. As for the backup, that role remains unclear, with Harbaugh touting Alan Bowman, former shortstop Davis Warren and true freshman Alex Orji as potential candidates. We’re guessing Bowman will be the No. 2 guy in case of injury (he has experience and production), but it wouldn’t be surprising if Warren gets some reps in the blowout. If we haven’t told you enough, he really has a strong arm.

Notes: Like last week, true freshman C.J. Stokes will return to No. 2 Michigan if Donovan Edwards can’t go. But Blake Corum should be expected to see the bulk of the carries here, especially in crunch time against a better opponent.

Notes: Our projected starters include Trevor Keegan, who is probably injured (see above). If he can’t go, Carsen Barnhart (doubtful) or Giovani El Hadi are the next available options. All eyes will be on the front five this week after some so-so efforts in pass protection, which remains a weak spot for the group.

History: Did Jim Harbaugh predict the next step for Michigan’s offense?

Notes: Luke Schoonmaker and Eric Ohl continue to play roughly the same number of snaps (69 and 64, respectively), while Michigan has done a great job with others in the group. Look for it to pick up a bit as we enter Big Ten play.

History: Michigan ready to defend Big Ten title: ‘Every team has a target on their back’

Notes: The trio of Ronnie Bell, Roman Wilson and Cornelius Johnson continues to eat up most of the targets, while Michigan finds roles for AJ Henning, Andrell Anthony and true freshman Darius Clemons. We’ll see where things go, but Anthony remains relatively inactive as the Wolverines focus most of the passing game on the above three.

History: In three games, WR Ronnie Bell has picked up where he left off

Notes: A couple of observations through three games: Brayden McGregor’s workload is increasing, while Taylor Upshaw’s time on the field has decreased. It may have only been one week, but Michigan used the first three games as a gauge. Expect the spin to increase a bit.

Notes: As in previous weeks, the absence of Nyhai Hill-Green will play a factor here. He could be a starter if healthy and available, but Michael Barrett and Kalel Mullings have done a great job holding down the fort through three games. Competition is expected to increase, things can change, but having (some) depth at that spot will be key.

Notes: Michigan started a five-man backfield last week with Mike Seinristil, and it’s very likely he’ll do the same this week against Maryland’s explosive passing attack. Seinrystil has proven to be an effective pass rusher and tackler, making it comfortable for the Wolverines coaching staff to rely on a nickel look as opposed to three linebackers.

History: Mike Seinristil is finding his way in his new position

Looking for a one-stop podcast for all things Michigan athletics? Listen to MLive’s Wolverine Confidential regularly. Find the latest episode below or wherever you stream your podcasts.