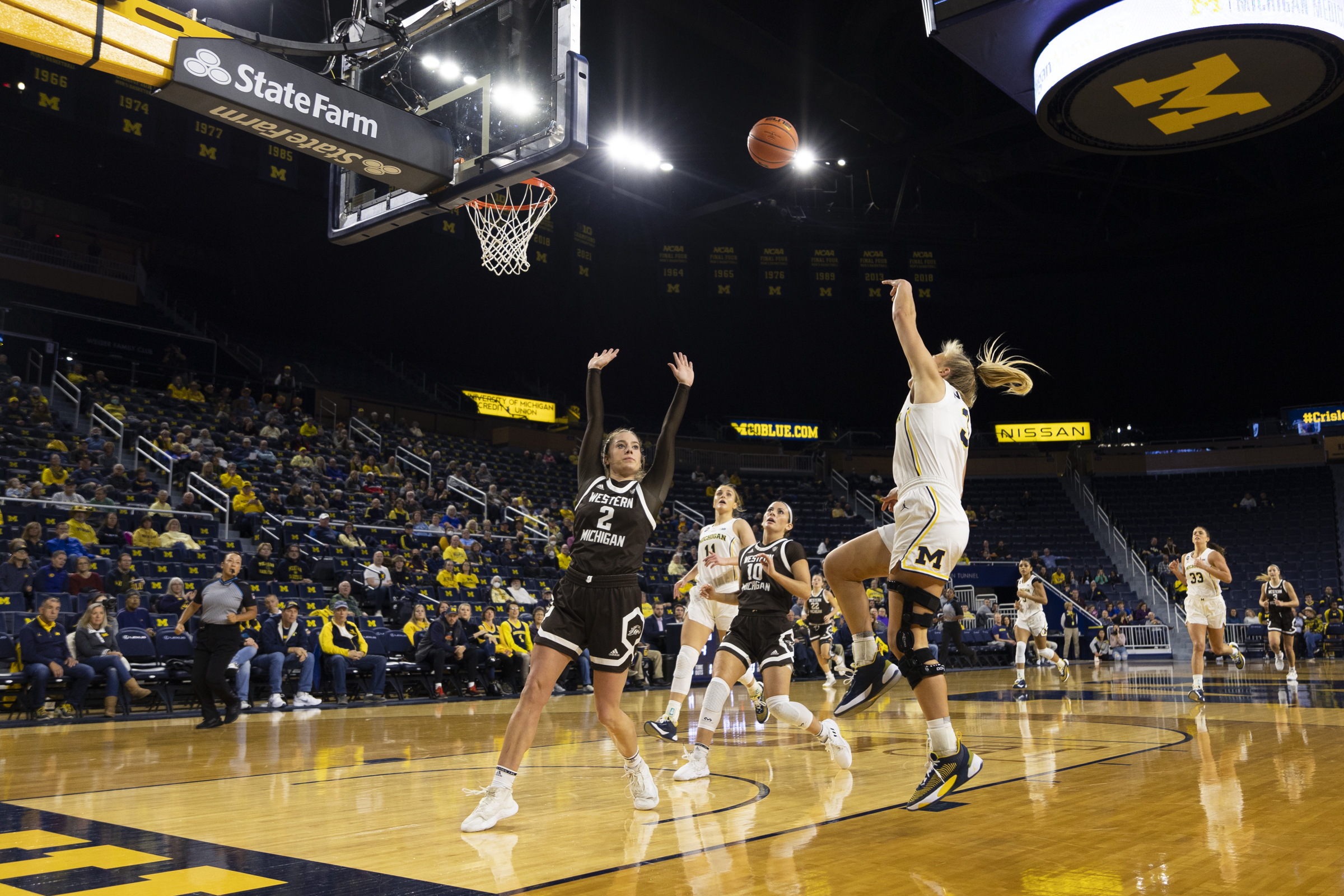 In two games against non-conference opponents, the No. 23 Michigan women’s basketball team has come away with dominant wins, defeating its opponents on both sides. Clean passing, easy baskets and suffocating defense were key throughout the first 80 minutes of the season.

On Wednesday night — despite the one-sided finish — his performance wasn’t quite as stunning.

The Wolverines (3-0 overall) defeated Western Michigan (0-3), 99-67, in another dominant offensive game. Strong 3-point shooting was key for this unit as they were able to prevent a streaky Western Michigan team from scoring.

Sophomore guard Layla Felia continued her electric start to the season, injecting life on both ends. In an early tone-setting sequence, Felia deflected an inbounds pass for a loss, then found two points on the other end of a clean Eurostep drive. Felia finished with 25 points on 11-of-15 shooting.

Equally important early on were Michigan big forwards Cameron Williams and graduate forward Emily Kaiser. Facing a Western Michigan team that lacked size and strength in the paint, the two struggled, combining for 13 points and nine rebounds in the first quarter. Kaiser, in particular, has excelled in dealing with these offensive inconsistencies, scoring and passing well.

But not everything was so simple for Wolverine.

Western Michigan, despite legitimate mismatches on both ends, kept itself in the game early. The high energy defense gave them five interceptions in the first quarter.

On the other hand, strong three-point shooting helped the Broncos stay competitive throughout. Sophomore Maggie Stettelburg was the clear focal point of Western’s offense, especially early in the game. Her back-to-back 3-pointers in the second quarter trimmed Michigan’s deficit, making the Wolverines’ defense as uncomfortable as it has been to this point in the season. Senior guard Maddie Nolan was eventually able to stop the bleeding for Michigan with back-to-back 3-pointers, forcing Bronco to call a timeout.

When the game returned, those hits proved contagious, with sophomore guard Greta Kampschroder adding one of her own. Felia, the center of the Wolverines’ offense so far this season, then scored eight straight points to give Michigan a 16-point halftime lead.

Then the defense stepped up in the second half.

Eight interceptions helped the Wolverines bury Western, and the difference in energy emanating from the locker room was palpable. Felicia, Kaiser and senior guard Leigh Brown played with much more intensity and communication.

With that coverage, the Broncos continued to have some success from deep. Stettelburg and guard Lauren Ross made impressive shots from distance. At the other end, however, sophomore guard Jordan Hobbs added two of her own to preserve Michigan’s lead.

However, to describe his work as comfortable may be an oversimplification.

On the Wolverines’ first possession of the game, a long pass from Felia to Kampschroder led to a quick turnover. Those long overhead passes were highlights of the Wolverines’ offense in wins against St. Francis (Pa.) and Delaware State. Western Michigan was able to force a different result.

As Michigan approaches conference play, it’s clear it’s still learning its limits. But while Wednesday night’s game wasn’t perfect, it still turned into a decisive victory for the Wolverines.