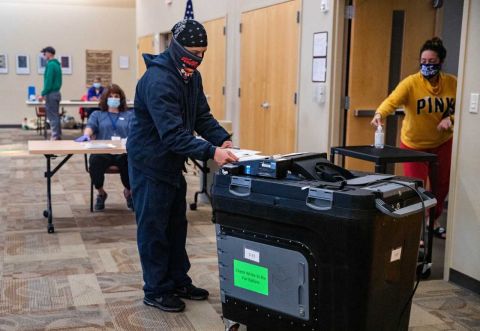 Another 1,616 counted ballots appear to have been cast by Michigan residents who died on election day. But most of them were ballot papers legally issued by voters who later died and were not removed from the voter lists by local officials until election day. audit report.

Auditors say 20 voters recorded during the 2020 vote died before the absentee voting period. However, in many cases, the deceased had a common name with another voter, suggesting that the anomalies may indicate inaccurate record keeping rather than illegal voting.

The state had previously reported that the clerks had rejected 3469 other ballots from voters who voted in absentia while alive but died before election day.

Overall, Michigan Auditor General Doug Ringler’s office said the state’s voter list, known as the Qualified Voters Card, and post-election audit procedures were “sufficient” to ensure the integrity of the election, “with exceptions.”

Ringler has held the position of Auditor General of Michigan since June 2014, when he was appointed to the position by the state legislature under the leadership of the Republicans.

President Joe Biden won in Michigan with 154,188 votes, which was officially approved by local, state and national officials, despite the unsupported support of former President Donald Trump for “election fraud.”

The Republican-led Senate Oversight Committee spent several months investigating the 2020 presidential election and found there is no evidence of widespread fraud.

The 1,647 questionable ballots identified by the auditors on Friday accounted for 0.029 percent of all votes cast in the presidential election.

Ringerler urged the office of Michigan Secretary of State Jocelyn Benson to continue to improve processes to reduce the risk of non-eligible voters. He also questioned whether the state should change procedures to allow district clerks to remove deceased people from a qualified voter file instead of forwarding the information to local clerks for processing, which could speed up the process to provide accurate lists.

In an official response released along with the audit, Benson’s office said it agreed with the recommendations, pointing out that the State Department has already upgraded its computer systems in 2021 and is introducing a new “reconciliation” process to ensure voter lists regularly checked on a schedule. .

In a statement, Benson said the auditor general’s report confirms what her office has already discovered as a result of its own post-election audit: “The Michigan election in 2020 was safe and the result accurately reflects the will of the electorate.”

“The auditors acknowledged the tremendous work done by the Michigan State Bureau and local election officials to conduct more than 250 successful post-election inspections, assessing the bureau’s work better than ever,” Benson said.

But state spokesman Matt Hall, R-Marshall, said new report emphasizes the need to “strengthen our laws to ensure that deceased people do not vote in our elections,” including improved record keeping and allowing district clerks to remove deceased voters from the lists.

“Every month, the state is required by law to check the lists of the dead to make sure people are being removed,” Hall said. “The inspection showed that it is clearly not done.”

The Auditor General’s review was prompted by a request in March 2021 from State Representative Julie Alexander, R-Hanover, who did not immediately respond to a request for comment on Friday.

In total, the Control Service analyzed the state records of qualified voters for 11.7 million voters in nine different general, primary, regular and early elections between 2019 and 2021. The auditors identified:

The Auditor General also reviewed the post-election audit process, which included a list of hands at a record 258 individual polling stations, a separate list in Antrim County, and other “risk-limiting checks” that compared 18,000 randomly selected paper ballots to the table. in more than 1,300 jurisdictions to ensure accuracy. The auditors identified:

Ringler’s office recommended that the Bureau of Elections “improve its oversight and reporting on post-election inspections appointed by district clerks” to ensure that post-election reviews were completed and documented in a timely manner.

The State Department agreed with the recommendation, saying officials contacted clerks who did not provide audit results for 2020 in January 2021. In some cases, often due to the COVID-19 pandemic, the state stated that it relied on verbal confirmation from clerks that audits had been completed even if they were not properly documented.