Mascots Matter: The Foundation fights cultural insensitivity with one grant 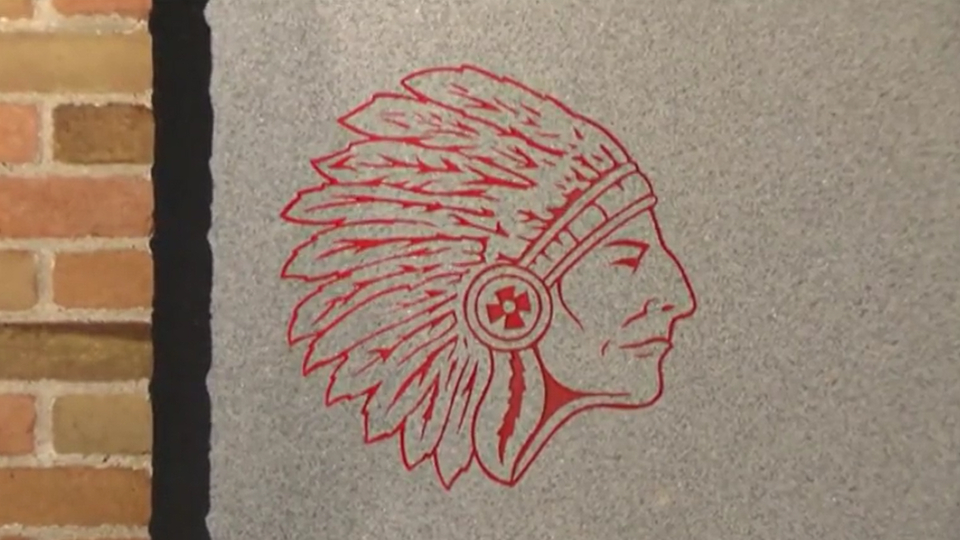 GRAND RAPIDS, Mich. (WOOD) — The fight to retire Native American mascots isn’t unique to Michigan — just ask fans of the Cleveland Guardians or Washington Commanders. But Native American Heritage Foundation is a unique organization in Michigan that provides funding to schools and other organizations to cover the cost of change.

The fund was established in 2016 as part of an amendment to the 1988 gaming agreement between the Nottawaseppi Huron Band with the Potawatami and the State of Michigan.

The Nottawaseppi Huron Band contributes between $17 million and $19 million annually to the Michigan Economic Development Corporation as part of this gaming deal, according to Jamie Stack, chairman of the NAHF. The 2016 amendment provides $500,000 annually to be used specifically to address Indigenous cultural issues.

“(That money goes) to the Native American Heritage Foundation as a grant for any initiative that’s trying to create a positive, respectful collaborative relationship,” Stuck told News 8.

NAHF started first distribution of grants in 2018. In the five years since then, about 60% of the grants — $1.52 million — have gone to Michigan schools to retire or rebrand their mascots.

The biggest gift went to Belding Schools. The NAHF awarded the district $334,000 to help replace equipment and signs. Belding, like several other schools and teams across the country, was once known as the Redskins, a term that Native communities consider an insult. Many Native Americans, including Stuck, do not use the term, instead calling it the “R-word.”

In West Michigan, Paw paw, Saugatuck, Chippewa Hills, Saranak and Hartford school districts also received funding from NAHF for retirement/rebranding efforts. NAHF also donated $98,000 Godfrey-Lee Public Schools to help the county change its “Rebel” mascot, which many people find offensive because of its association with the Confederacy and slavery.

For Stuck, making a difference isn’t about being offensive, it’s about creating a healthy and inclusive environment.

“What kind of atmosphere do these mascots and images create at competitive events? If you have certain images or certain mascot names that have a negative psychological impact on our Native American students’ ability to learn and feel comfortable in the school environment, that’s where I have a problem,” Stuck said. “I try not to focus on the attack. You know, I was watching the Kansas City Chiefs game yesterday and, you know, the tomahawk thing. For some indigenous people, it can create a very negative sporting environment to have thousands and thousands of people around you chanting and representing what you know about your culture as inappropriate and inaccurate.”

However, change does not work well in many communities and is often met with great resistance. It took the Paw Paw Public School District years to negotiate the change. After months of debate, the district school board voted yes keep the mascot in 2017.

Only in 2020 — and with a new superintendent — Paw Paw Public Schools has agreed to retire the mascot only in 2020.

“Our nickname prevents us from realizing our true potential as a school that welcomes, celebrates, supports and challenges all students,” Superintendent Rick Rea wrote in the 2020 statement.

Paw Paw went from the Redskins to the Red Wolves, launching a program called “Welcome to the Pack” to encourage students to feel welcome in the community.

“The student feedback from these surveys is very encouraging. This validates the work our people are doing in this area and shows that more and more students understand that they are an integral part of our ‘pack’ and feel they are getting the support they need to succeed in their studies “, Rea said last year.

Stuck said he understands much of the pushback and criticism, but believes that inclusivity and mitigating cultural appropriation take precedence over tradition.

“Sometimes you’ll get the rebuttal, ‘What if our school doesn’t have many Indigenous students?’ What if you go to the playoffs and your districts or regionals or state finals and you’re playing schools that have indigenous students?” Stuck clarified. “I try to always emphasize that it’s not just about problems and pointing out what’s wrong and what needs to change, but it’s also about providing solutions and being at the table to talk to people.”

Melissa Kiesewetter, Tribal Liaison Michigan Department of Civil Rights and NAHF board member, said it’s important to help communities understand the need for change and guide them through it.

“Whether it’s providing commentary at a school board meeting where the topic is discussed, or giving presentations on implicit bias and the harm it can cause. And then we’re also involved in the actual transition that the schools are making,” Kiesewetter told News 8.

Kiesewetter said school districts now know they can look to the NAHF to help them with the rebranding/retirement process.

“They can contact us before they even get to the transition process and say, ‘We’re trying to decide how to approach this. Shall we vote? Are we considering this on the school board? How involved should students be in this?” Kiesewetter said.

She believes it is important to keep students and families involved in the process so they feel welcome and included.

“The main goal of thinking about school spirit and mascots is for everyone to feel a sense of belonging, a sense of loyalty,” Kiesewetter said.

In April, the Sandusky school board voted to eliminate the mascot. Earlier this month, Sandusky Public Schools announced three finalists and potential logos for the next mascot. He asks community members to vote on their preferences.

Protocol of the school board show Camden-Frontier The board is considering creating a committee to study changing the mascots, but no action has been taken yet.

When asked, Kiesewetter would not admit that the goal is for all schools to ditch indigenous mascots. She noted that some communities have close ties and positive relations with tribes – primarily Central Michigan University and the Saginaw Chippewa Indian Tribe.

“I think the goal is to make sure that every kid, every student can feel connected and feel a sense of belonging. And if an image, a mascot, a nickname does not give each child this sense of belonging and does not expand the opportunities and increase the self-esteem of each child, then the school should think about changing it,” she said.

NAHF has also made donations to several colleges across the state to help expand Native American programs, including Northern Michigan University’s Anishinabek language course offerings and speaker and advertising expenses for educational symposiums on Native cultures.

Bronson Park is identified as a Native American ceremonial site

The foundation has also donated to several schools and is working at the state level to add more Native American history and culture to the state curriculum. The Michigan Confederation of Tribal Education Departments has put together its own social studies manual and resource collection to provide teachers with a more accurate and authentic foundation for teaching Native American history.

Kiesewetter said the history and cultural influence of indigenous peoples has been ignored for too long. A research is done Penn State University researchers found in 2015 that 87% of history and social studies textbooks in US schools do not include any content about Native Americans after 1900.