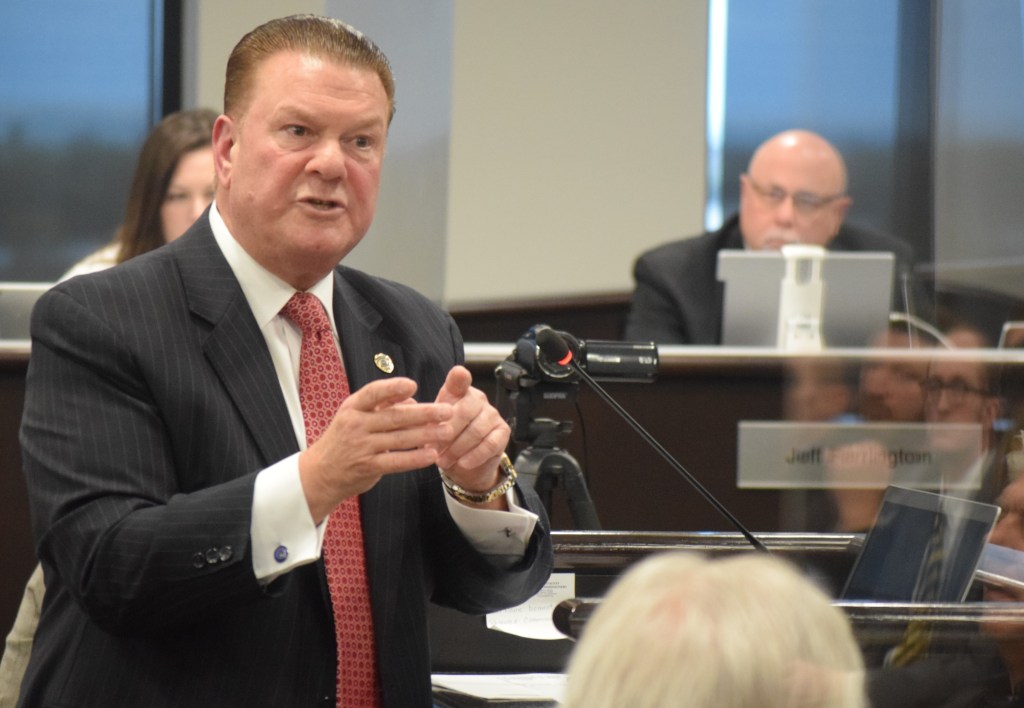 Macomb County Attorney Peter Lucido is under investigation for numerous complaints of harassment and / or discrimination in the workplace, as well as protests against the publication of information about the ongoing investigation.

Documents received late Wednesday night testify to an investigation into workplace complaints against Lucido, but did not say whether any of the alleged incidents were sexual in nature. The Lansing-based publication reported that the complaint of harassment was sexual in nature.

Andrew McKinnon, then director of human resources and labor relations, informed Lucido on February 22 that the county had hired law firm Butzel Long to investigate the complaints, according to documents obtained by The Macomb Daily under the state’s Freedom of Information Act.

“Macomb County policy requires that we investigate complaints and ensure that no staff member retaliates for filing a complaint,” wrote McKinnon, who is now deputy mayor.

Details of the complaints were not provided due to the fact that the case is under investigation, which is expected to be completed within a few weeks, a county spokesman said.

Lucido’s lawyer Cameron Evans told The Macomb Daily on Wednesday night that the county had failed to provide prosecutors with details of the charges, despite a March 2 letter sent to McKinnon requesting them.

“Attorney Lucido was not even informed of the charges against him, and he was not allowed to respond to them and defend himself,” Evans said.

In the letter, Evans accuses McKinnon of improperly disclosing information to the Michigan Information and Research Service Inc. (MIRS), which published material detailing some of the details of the complaint, allegations of sexual harassment filed by a current prosecutor.

“By submitting these details to MIRS, a current or former Macomb County employee (or staff member) has violated your department’s privacy policy,” Evans wrote. “None of this information should have been passed on, except to those who needed to know in your department, to the law firm Butzel Long and, of course, to the prosecutor Lucido, who is entitled to due process as he defends himself against these baseless claims.”

Evans also accuses McKinnon of confirming the complaint, saying in a MIRS report that he “cannot comment on an active investigation,” and claims he provided information.

“By using these words, you have deliberately confirmed that there was an active investigation,” Evans says.

McKinnon said Wednesday night he had not passed information to MIRS, confirming he had answered a reporter’s phone call.

“I have no idea where MIRS got this information from,” McKinnon said.

This is not the first time Lucid, a former state MP, has been accused of misconduct in the workplace.

In January, Jerry Witt, a member of the UAW Supervisors’ Union, claimed that Lucido had created a hostile work environment and was trying to fire two of his chief assistant prosecutors, both of whom are under union protection. Witt compared Lucido to former district clerk Karen Sprenger and said Lucid’s alleged actions against one of these prosecutors sparked accusations against him of unfair work practices.

Lucido has also been charged with four incidents of sexual harassment that allegedly occurred when he served as a state senator in 2019 and 2020. Three of the charges involved inappropriate touching of clothing, and one incident involved alleged verbal harassment.

Investigators concluded that none of the complaints against Lucido could be “unequivocally substantiated,” according to a note released after an investigation by the Senate Bureau of Business. But it said he considered the accusers “credible” and “rather than not”, every incident occurred as they reported.

Lucid was deprived of the Senate chairmanship of the Senate Committee and consent, and he was ordered to undergo training, although he indicated that he did not participate in it before leaving public office.

Last year, two groups of citizens asked Lucid to resign over the latest charge of sexual harassment, which was leveled after he took over as prosecutor in January 2021.

Lucida was also in dispute with county chief Mark Hackel and his administration.

In January, he sued the county and Hakel over the executive’s refusal to fund two full-time and two part-time positions, which were approved by the county council of commissioners for the 2022 budget, in addition to what Hakel recommended. Lucido disputes Haeckel’s assertion that he did not follow the budget procedure.

Information on the Freedom of Information Act also shows that on December 3, Haeckel told Lucido to stop contact with heads of executive departments and staff because of the “confrontational nature” of his requests.

“A number of department heads and support staff have expressed concern about your behavior and the way your office has requested support services,” Hackel wrote in a letter. “The persistent and confrontational nature of requests from you and your office is unacceptable.”

Hackel told Lucido to contact him personally with any concerns.

On February 16, Hackel wrote to Lucid again, noting that on February 15, Lucid had sent McKinnon a letter asking him to “refrain from what I asked him to do.”

Hackel tells Lucido to “refrain from direct contact with my staff if you have problems, and instead contact me directly.”

Because Lucid is an elected official, he cannot be disciplined in the same way as a typical employee if it is found that he has done something improper.

“If he had created a toxic work environment, we would have done everything in our power to protect our employees to the best of our ability,” said McKinnon, who declined to say what the move might include.

McKinnon noted that Lucido is subject to a professional code of conduct as a lawyer and may be personally responsible for his actions.

Evans, Lucido’s lawyer, last Friday sent a letter to the county objecting to the publication of information under the FOIA due to the exception.