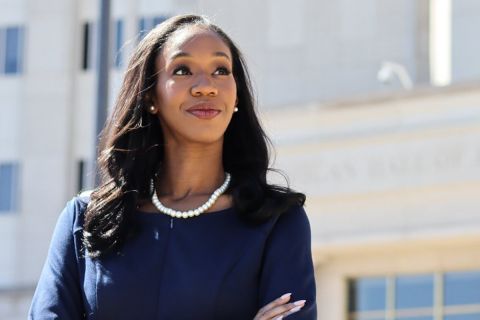 “She will bring a unique perspective to our high court as a black woman — and as a new working mom — that has been sidelined for far too long,” Whitmer said.

“Kira has been committed to fighting for justice for generations, and I know she will serve Michigan well as she builds a bright future for her newborn daughter and all of our children.”

In a prepared statement, Bolden said she hopes “my voice on the court will inspire future generations to pursue their dreams.”

“I am humbled by this honor and ready to get to work on behalf of all Michiganders,” Bolden said.

“The composition of our courts should correspond to the impact of decisions on the population. I thank the governor for selecting Kira Bolden to serve on our state’s highest court,” she said. “I know that Representative Bolden is a sincere, caring and thoughtful person who will always consider the significant impact of each of her opinions. She will serve the state honestly and humbly, and will do it with pride.”

Bolden was one of five candidates vying for two seats on the Supreme Court during the Nov. 8 election. She finished third with 21.4 percent of the vote behind incumbents Richard Bernstein, a Democratic nominee first elected to the court in 2014, and Brian Zahra, first appointed by former Republican Gov. Rick Snyder in 2011.

Bolden will also be the only judge to have served as a state legislator. She is serving her second two-year term and serves on the Judiciary Committee of the House of Representatives. She worked on criminal justice reforms and championed bills to protect survivors of sexual assault.

Before being elected to the legislature, Bolden was a criminal defense attorney. She also clerked for Wayne County Third District Court under Judge John Murphy and served as a civil trial attorney for the private law firm of Lewis & Munda, PC. She graduated from the University of Detroit Mercy School of Law.

Bolden will serve a partial term that ends Jan. 1, 2025. She must run again in November 2024 if she wants to finish out the remainder of McCormack’s term, which ends Jan. 1, 2029. under the Michigan state constitution.