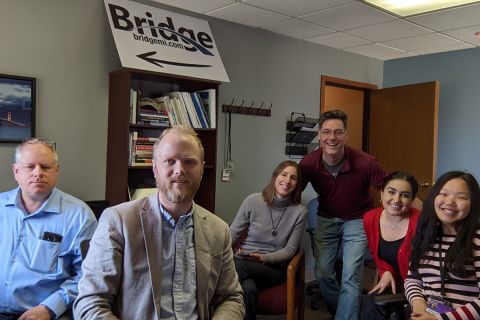 “Austing is a great writer and knows how to capture and retain the interest of readers,” said Judge Journalist of the Year Tom Tolen.

Second Judge Sarah Mahone cited: “Austing’s determination to tell the story through the eyes of real people, from Upper Peninsula legislator and dairy farmer extremists from small towns, makes it clear that this problem is close to home.

Austing is a native of Grand Rapids who holds a master’s degree in journalism from the University of Michigan. He previously covered policies for MLive Media Group and The Detroit News before joining Bridge Michigan in 2019.

“Jonathan is a damn reporter,” said Joel Kurt, editor-in-chief of Bridge Michigan. “His scrupulous reports and encyclopedic knowledge of Michigan politics have never been as important as after the 2020 election, when he worked tirelessly to claims of fraud with fact-checking and explore the shadow world of extremism.”

The Journalist of the Year Award has been awarded annually to the MPA since 2014. Current Michigan Bridge employees have been recognized as journalists for the fourth year in six years.

Bridge Michigan became the digital publication of the year at a nationwide competition. Bridge had previously won the newspaper of the year four times in 11 years of existence from the journalism organization before the digital division was added.

Other awards received by Bridge Michigan and its staff:

The best essaythrough records in all divisions: first place, Robin Erb, “He had dementia and COVID. She wanted to hug him when he died».

Excellent reports in police and social justice: Second place, Kelly House and Austing for a series of stories Northern Michigan’s struggle against racism.

Business / Agriculture News: first place, Gardner, for ‘These people want to work. ” When GM and Flint post vacancies, people line up”; second place in Erba for «Michigan, Michigan educators received a $ 2 raise during COVID. Should it be permanent?”; third place, Sofia Kalakaila and House, for «Wolf Wars: As Michigan Swarms Grow, Battle for Predator Killing Is Coming”; honorable mention of Gardner for «In “urgent need,” one in five Michigan restaurants may not survive the winter».

Typical photo: First place, Daytona Niles, for “Virtual School Blues”; second place, Niles, for «He had dementia and COVID. She wanted to hug him when he died».

Typical story: Second place, Erb, for «He had dementia and COVID. She wanted to hug him when he died».

Company report news: First place, Erb and Corey Barrett from Public Media Side Effects, per series Michigan Mental Health of Children during COVID; third place, House, for «Loved to death: the iconic shores of Lake Michigan are beaten by crowds».

Photo news: First place to Dale Young for the photo a young girl at a police rally.

Civil service: Second place behind Austing, Wilkinson and Madeline Halpert, behind the truth in Michigan after the election.

Compilation of the best agents on the New Jersey shore