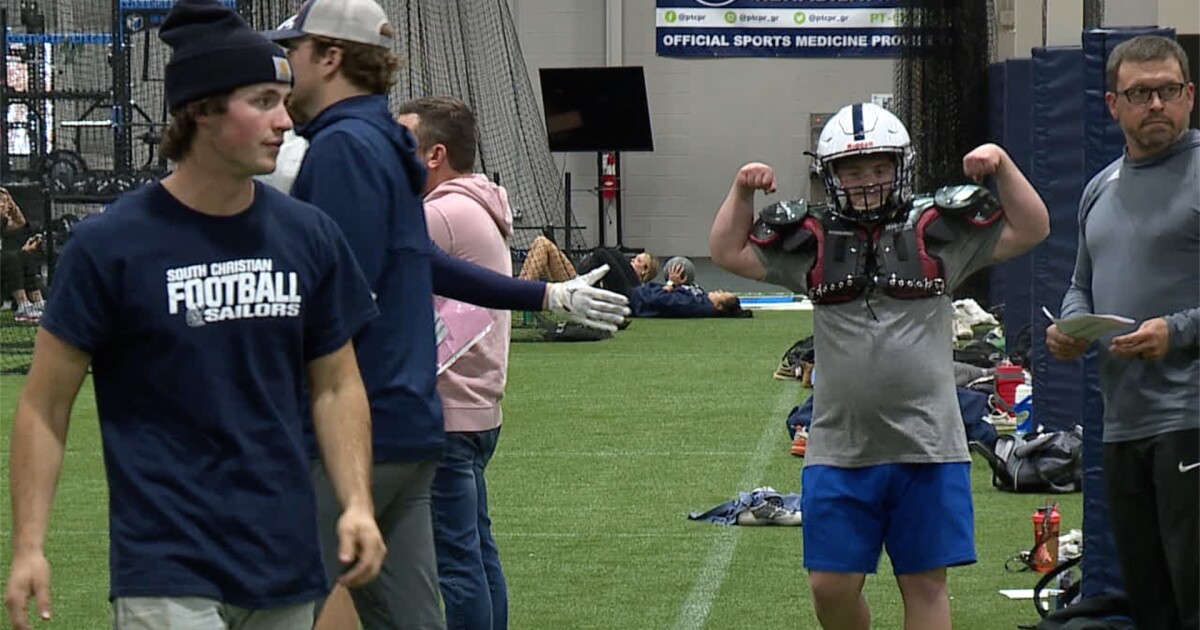 CALEDONIA, Mich. — No. 88 for South Christian, Jimmy Toole, likes to carry the ball.

“I play running,” said Toole, a junior with Down syndrome.

Jimmy was a participant in the very first Victory Day held by South Christian.

Victory Day is a football event designed for people with disabilities to play and score.

Since that day eight years ago, football has been a big part of Jimmy’s life.

“It’s nice to see kids being brought up like that because they bring joy to the team,” South Christian junior guard and midfielder Mitchell Lindhout said. “It’s amazing that they can enjoy the sport as much as we do.”

Jimmy dresses up in full uniform for every game and even stands at the end of some of them to kneel.

“Cameron, Cam Post, Danny Brown and Coach Eric,” Toole said when asked what he likes most about the team.

“Jimmy is a big part of what we do,” South Christian head coach Danny Brown said. “He’s all over Southern Christian football, he loves it and it’s an absolute joy to be around day in and day out.”

The Sailors and Jimmy seem to be a match made in heaven.

“I love spending time with him,” Lindhout said. “It’s nice to be around him. He’s always funny and when you’re having a bad day or something, he makes you laugh and he’s a lot of fun to be around.”

“He made a big impression on those kids,” Brown said. “Jimmy’s always having a good day, he’s dancing, laughing, working out with a big smile on his face, so we have good days when Jimmy is around.”

South Christian will play at Ford Field on Friday night in the Division Four state championship game, but this isn’t Jimmy’s first trip to Ford Field.

Back in 2014, Jimmy became friends with Jeff Plasman, who was part of the Sailors’ state championship team that year.

“He started showing up at all our games,” Brown said. “I think we really somehow got him into the locker room at Ford Field, so he’s been a part of it ever since and for as long as I can remember.”

The Mariners will play Goodrich in the title game.