In the first reading, the city executive committee accepted the status of a historical district 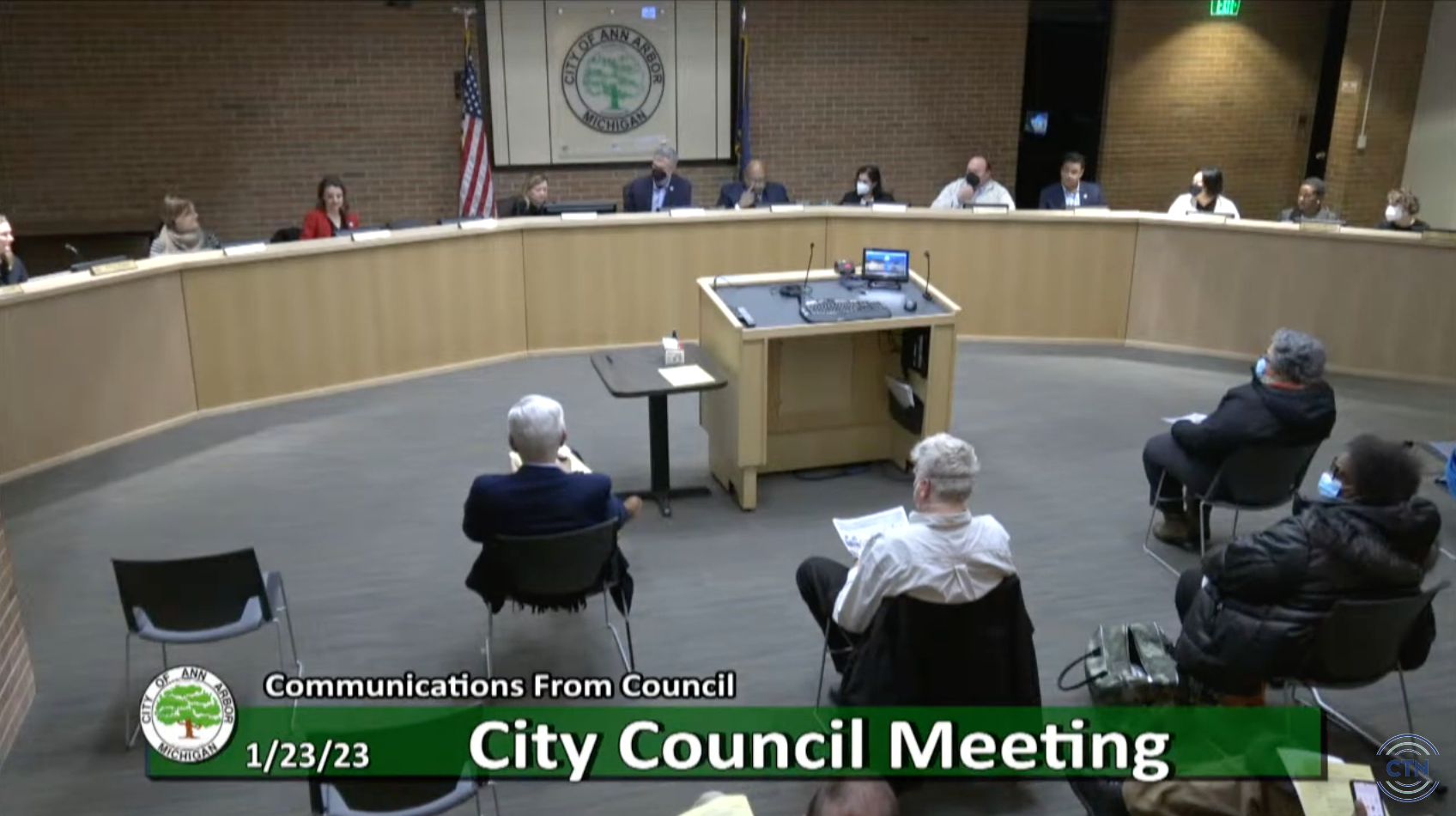 Mozhgan Savabiesfahani, a local activist who regularly attends city council meetings, spoke during the public hearing section. continues urge the city to pass an ordinance boycott Israel. During the public comment section of the meeting, Mozhgan said recently protest led by students at the University of Michigan, demonstrated the urgent need to pass a boycott resolution.

“I often come here to talk about Palestinian rights,” Savabiasfahani said. “I wonder if Mr. Mayor heard the voices of the (UM) students protesting outside the auditorium, saying, ‘Not one cent, not one dime!’ No more money for Israel’s crimes!”

Councilwoman Jen Eyer, D-Ward 4, responded by showing a printed copy of the digital poster attached to an email sent to the City Council and Mayor Christopher Taylor Saturday morning from Sawabiesfahani. The email, which was obtained by The Michigan Daily, included a digital poster with caricatures of all current city council members on leashes chained to a personified representation of Israel. Ayer said the letter had racist undertones.

After criticism from protesters, Ayer tore up a physical copy of the photo that was distributed at the council meeting.

Councilwoman Lin Song, D-Ward 2, then offered her condolences to the victims Shooting in Los Angeles. The shooting, which killed 10 people, happened during a local celebration of the Lunar New Year in Monterey Park.

“Monterey Park has historically been known as a place that the majority “Asian Americans, a place to shop, eat and feel safe,” Song said. “We also have extended family and loved ones in our community. It’s been great to see people come together to make sure family and friends in the area are okay, but I think it’s also a moment of reflection. New Year according to the lunar calendar. It is a time when we reflect on where we come from (and) who we are and share traumas and stories. I hope that the New Year will be healthier, happier and more prosperous.”

Song invited members of the Ann Arbor community to attend two events this Sunday celebrating the Lunar New Year, a lion dance and a tea hour.

“I hope you will come with your children and loved ones,” Song said. “And then I’ll have a tea hour, continuing the Lunar New Year celebrations with traditional crafts at Trevorwood from 3:30 to 5 p.m.”

Then the Council voted in favor to fix and delay the passage later CA1, a resolution approving a construction contract with the architectural firm of CA Hull for the reconstruction and expansion of the East Medical Center Bridge. In February 2022, the City Council approved contract with architecture firm DLZ Michigan after the university requested widening of the East Medical Center Bridge, a route adjacent to the university’s medical center that connects the Central and North campuses.

Ann Arbor City Administrator Milton Dohany said the recent contract renewed discussions between city staff and the university regarding bicycling and pedestrian safety. The discussion was also about the distribution of costs worries related to the university’s original plan to widen the lanes and sidewalk on the east side of the bridge while narrowing the sidewalk on the west side.

“This evening represents several conversations we’ve had with the university to arrive at what you have before us,” Dohani said. “I would be remiss if I didn’t express our gratitude to our staff and university staff for so many activities that we had to come up with.”

Ann Arbor resident Larry Deck is a member Washtenaw touring bikea public organization that advocates for the safety of pedestrians and bicyclists spoke in the Public Comment section, expressing concern about the costs listed in the contract.

“The contract is for $2 million to widen the bridge by two feet, as I understand it,” Deck said. “We talked about what it cost about a year ago half a million dollars to extend it five feet because of the need for additional support. So it looks like we would be paying more for less.”

Councilwoman Erica Briggs, D-Ward 5, asked City Engineer Nick Hutchinson about the reason for the cost increase. Hutchinson said this was primarily due to rising labor costs and that a preliminary estimate was made at an early stage of planning.

“The cost estimate for the bridge expansion from last year was a very, very rough estimate before the consultants even started designing,” Hutchinson said. “And during that time, we’ve also seen a massive increase in construction costs. So it’s a combination of those two things. We are seeing higher prices and it was an estimate made with very little information to begin with.”

“Our commitment to and prioritization of safety and accessibility for non-motorized users has matched ours A comprehensive transportation plan based on Vision Zero” said Ghazi Edwin. “I think it’s important to have it and have it written down in black and white.”

Councilwoman Dharma Akmon, D-Ward 4, said she also added an amendment to show the city’s support for 10.5 feet of sidewalk on the west side of the bridge and a barrier path to maximize potential benefits for pedestrians and bicyclists.

“I think the barrier protection is important for the level of traffic going through, given the fact that it’s on a bridge and it’s right across from the roadway,” Ackmon said. “And then, as I said about the width, I think it’s important to keep at least the width that we have now on the west side. I want us to try to get as much space for pedestrians and cyclists as possible.’

The amendment passed 10-1, with Taylor voting against. Briggs suggested moving the agenda to the next meeting so city staff and the engineering firm could provide more details on the implications of the amendment’s wording. The walk was accepted unanimously.

The Council also adopted unanimously C-1, the first reading of an ordinance designating the home of Robert Hayden and Erma Hayden as a historic district. Robert Hayden was a famous poet and UM graduate as well the first African American faculty member in the UM English Department. He was twice given in Hopwood Awardscholarship for outstanding graduate and undergraduate students.

In the 1960s, Hayden moved to the Lower Burns Park neighborhood of Ann Arbor, which was very segregated at that time and lived at 1201 Garner Avenue until her death in 1980. Erma Hayden was a concert pianist and the first African-American woman to serve as director of music in the Nashville Public School System. The Haydens lived together in the house during the 1970s.

Daily staff reporter Chen Liu can be reached at lyuch@umich.edu