“I have no more home” Members of the UMich community are spending time in Burton Tower in solidarity with Ukraine. 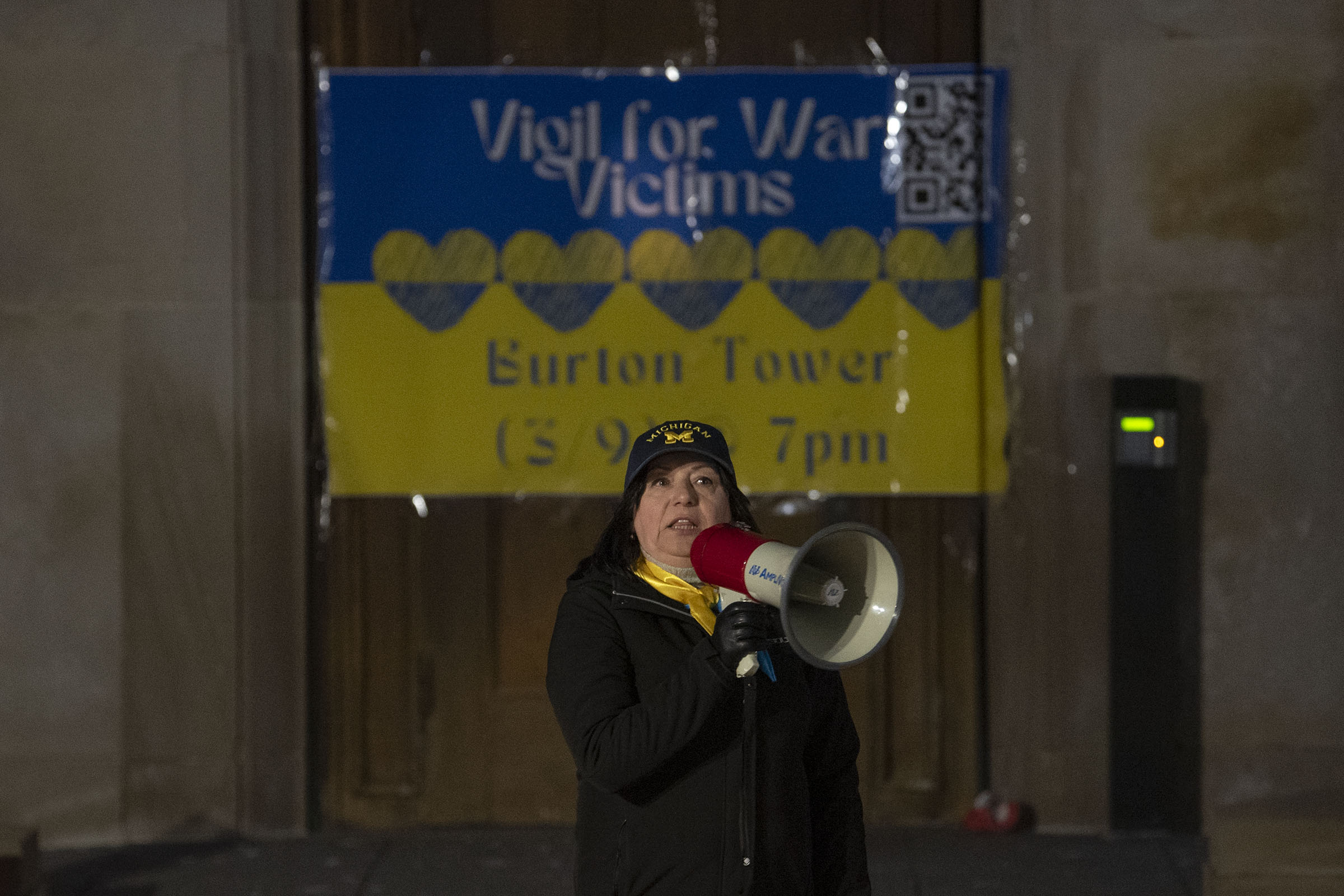 When the blue-yellow color of Ukraine fluttered in the wind on Wednesday night, many gathered at vigil of war victims hosted members of the Ukrainian community and the village Diversity Committee (DAC) LSA student government after Russia’s invasion of Ukraine.

Accompanied by traditional and modern Ukrainian music, which emphasized the power of Ukrainians, the speakers mourn the lives of those killed in Ukraine and called on people to act for the benefit of the state in crisis.

Among the speakers were students, teachers and community members from Ukraine, as well as others in solidarity with Ukraine. Most of the speakers talked about the experience of the war with their friends and families and how it affected them personally. They advocated the withdrawal of corporations from the Russian state. The group also asked the audience to write letters local officials create a “no-fly zone” over the Ukrainian sky.

Among the speakers were Ukrainian language teachers and teachers who worked with Ukrainians. They said that the Ukrainians they worked with decided to stay in Ukraine and were determined to continue the struggle for both Ukraine and Eastern Europe as a whole.

Vlada Zvyagina, a resident of Ann Arbor, said she has family and friends who live in Kharkiv, a city in Ukraine. devastated and worries about the danger that may befall her loved ones at any moment.

“My parents just fled from Kharkiv, … the city that probably suffered the most from the Russian invasion,” Zvyagina said. “The immediate threat to the lives of my family and my friends is what brought me here.”

Especially with increased Russian propaganda and misinformation about the Ukrainian invasion, Zvyagin said events such as the Vigil are important and give space for speakers to share their truths.

“I hope that (those present) will bring some truth, first-hand information,” Zvyagina said. “Many Ukrainians come here to share the history of their families who are now (in Ukraine). And if there is anyone who can tell you the truth, it is the people who see it with their own eyes, and those who talk to these people. “

She said that mainstream media has repeatedly called for action against Ukraine to such an extent that the issue has lost some meaning for the people.

“This is so many times that they are starting to turn into information noise,” Zvyagina said. “Here we are trying to ensure that (the conflict) does not turn into some news that they see in the (folk) tape, not what they are reading, but knowing that it is actually next to them; Ukrainians are here, they go to the same university, study in the same classrooms, work in the same laboratories. ”

Despite the fact that the battlefield is in the hemisphere, the impact of the war has global consequences, Zvyagin said.

“This war has affected people who are stressed, depressed and suffering from this war, not only physically, but also the people who are here,” Zvyagina said.

Rackham student Oksana Brukhovetskaya also has family and friends in Ukraine. Brukhovetskaya said that her parents were subjected to Russian shelling every night and she was very tense for the safety of her family.

“I have many friends who are still in Kiev, who publish their internal reactions,” said Brukhovetskaya. “They (published) what they feel from day one, so I watch it very closely, and sometimes it’s very, very hard. I have no words for this horror, and I never believed that this could happen to so many people. “

Brukhovetskaya said she supported the Ukrainian people in upholding democratic values ​​even in times of crisis.

“I think that this example of brave people who are fighting for themselves and for their rights to democracy is an example for the whole world,” Brukhavestka said.

An artist, curator and feminist, Brukhavestka began organizing exhibitions and public events when she returned to Ukraine. She participated in The Orange Revolution and the Maidan Revolution, its activity dates back almost two decades. During the vigil, Brukhovetskaya wore a blanket inspired by the Ukrainian flag and said one of her main goals was to raise awareness through her art.

“I finished (the blanket) just before the event, and also organized First Streetfirst rallies here in Ann Arbor on Saturday,” Brukhovetskaya said. “I designed and printed posters to (so I could) to talk to people and tell people not to forget about it.”

Brukhovetskaya also took part in many other campaigns in support of Ukraine, including a solidarity rally on Sunday in Detroit and two more protests in Ann Arbor. She said that she really appreciates actions such as vigils, because she believes that people should receive the latest information from people who know Ukraine better.

“I think it’s very important to remind people every day and convey information, because the situation three days ago is unbearable now,” Brukhovetskaya said. “These testimonies and the feelings we share are also very important in order to (take away) the support of non-Ukrainians.”

Rackham student Mike May is a member Hong Kong Human Rights Group at the university. Mae said that many of the same values ​​as free elections and democracy, which he supports in his group, should also apply to the crisis in Ukraine.

Mae said he came to the event because he cared a lot about the war and wanted to be in solidarity with his Ukrainian friends.

“My heart is broken for the Ukrainian people,” Mae said. “I came here to be in solidarity with some of my friends; I have Ukrainian friends in the department. I want to hear their stories. I just wanted to be here for them. ”

The Daily Staff reporter Joey Lin can be contacted at joeyylin@umich.edu.

Techtown Detroit | Tune in for the Salute Awards at 4pm 🏆