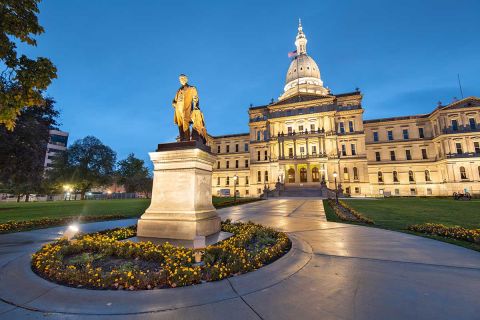 The cost plan includes more than $ 1.7 billion in drinking and sewage improvement projects, $ 450 million in parks and trails, $ 317 million in road and bridge repairs, and $ 250 million in broadband infrastructure grants to expand high-speed Internet in unattended areas.

The agreement received broad and bipartisan support in the House Appropriations Committee on Wednesday, when lawmakers from both major political parties approved the bill with amendments 27-0.

The full House and Senate are expected to vote on the spending plan as early as Thursday, sending it to the governor’s table, along with a separate bill that would transfer $ 250 million to an unemployment insurance trust fund.

While Whitmer and legislative leaders remain disputes over potential tax cuts and while the budget for next fiscal year had not yet worked, the governor called the additional spending agreement proof that Republicans and Democrats can work together to “do business” in Michigan.

“We are proud to announce that we have reached an agreement on bipartisan additional infrastructure to invest in our common priorities, including drinking water, high-speed internet, housing and parks,” she said.

“These are difficult times for families, small businesses and communities, and this bipartisan supplement (bill) will help develop our economy, create jobs and invest in every region of our state.”

The spending bill will use less than half of the $ 4.7 billion in federal incentives that the state has not yet spent. Approximately $ 2.8 billion of that money will remain on the table for negotiations on the annual budget, according to Mary Ann Cleary, director of the non-partisan fiscal agency House of Representatives.

These are “historic levels of funding” that will prove to be “transformational investments,” said Senate Appropriations Chairman Jim Stamas, R-Midland.

House Speaker Thomas Albert called the plan “the right way” for the state to take advantage of the “unprecedented opportunity to make monumental improvements to the structural foundation of Michigan communities.”

“The deal will use the one-time resources available today to benefit our children and grandchildren for the rest of their lives – which is extremely important given the potential implications of current federal policy for years to come,” Albert, R-Lowell said in a statement.

The bipartisan breakthrough comes after weeks of possible tax cuts in Lansing, where both Whitmer and the legislature say they are interested in returning part of the state’s surplus to residents but have been unable to agree on terms.

Whitmer on Friday vetoed the Republican party’s $ 2.5 billion plan cut income taxes on individuals, and she promised to do the same for a separate bill that would suspend the Michigan gas tax to curb constant price spikes.

Instead, the Democrat governor told lawmakers she was ready for a “short-term pause” in the car sales tax and wanted to pursue other forms of targeted tax cuts, including broad benefits for older incomes and an increase in income tax. Credit for low-income people.

As the new spending agreement headed for her to sign, Whitmer said Wednesday night that she looks forward to “continuing in that spirit of cooperation to adopt another balanced bipartisan budget that addresses kitchen table issues.”