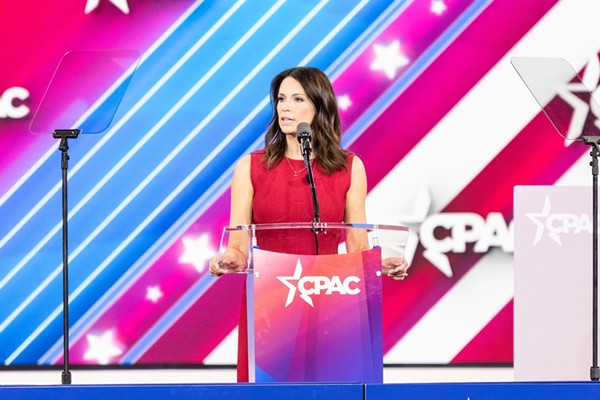 Too soon? GOP gubernatorial candidate Tudor Dixon joked about a plot to kidnap and kill Gov. Gretchen Whitmer at a campaign event Friday — which, of course, Whitmer’s office didn’t think was funny.

Dixon, who has been endorsed by former President Donald Trump, made the remarks during a campaign event at the American-Polish Cultural Center in Troy on Friday, criticizing the Democratic governor for policies that Dixon says have led companies to move jobs out of state.

“The sad part is that Gretchen is going to tie your hands, put a gun to your head and ask if you’re ready to talk,” Dixon said. Detroit News reports. “For someone who worries so much about kidnapping, Gretchen Whitmer sure knows how to take a business hostage and hold it for ransom.”

In accordance with Detroit Newsthe speech drew applause from the crowd of about 300 people.

In a statement, Whitmer’s director of communications, Maeve Coyle, said Dixon’s joke should disqualify her from office.

Threats of violence are no laughing matter, and the fact that Tudor Dixon thinks it’s a joke shows that she is completely unfit to lead Michigan.

“Threats of violence and dangerous rhetoric are undermining our democracy and preventing good people on both sides of the aisle at all levels from entering public service,” Coyle said. “Governor Whitmer has faced serious threats to her safety and life, and she is grateful to law enforcement and prosecutors for their tireless work.”

She added: “Threats of violence – against Governor Whitmer or candidates and elected officials across the aisle – are no laughing matter, and the fact that Tudor Dixon thinks this is a joke shows that she is completely unfit for public office.”

On Twitter, Michigan Attorney General Dana Nessel agreed. “This statement is disgusting,” she wrote. “@GovWhitmer is the victim of a very serious conspiracy to kidnap and kill her. Anyone who would take such efforts lightly cannot hold public office at any level.”

To this day, Dixon is unrepentant. “From a woman who wants to have a drag queen in every classroom…” she said in response to lesbian Nessel’s tweet.

From the woman who wants to have a drag queen in every classroom… https://t.co/0UKovA63dU

In October 2020, the FBI announced that it had foiled a plot involving 14 people, many with ties to a local police group, who planned to kidnap and kill Whitmer and overthrow the state government.

Last month, a federal jury convicted Adam Fox and Barry Croft for their roles in the plot.

PwC launches the “Work on credit” program for aspiring accountants