“Friends by the river” are preparing for cold weather and snow 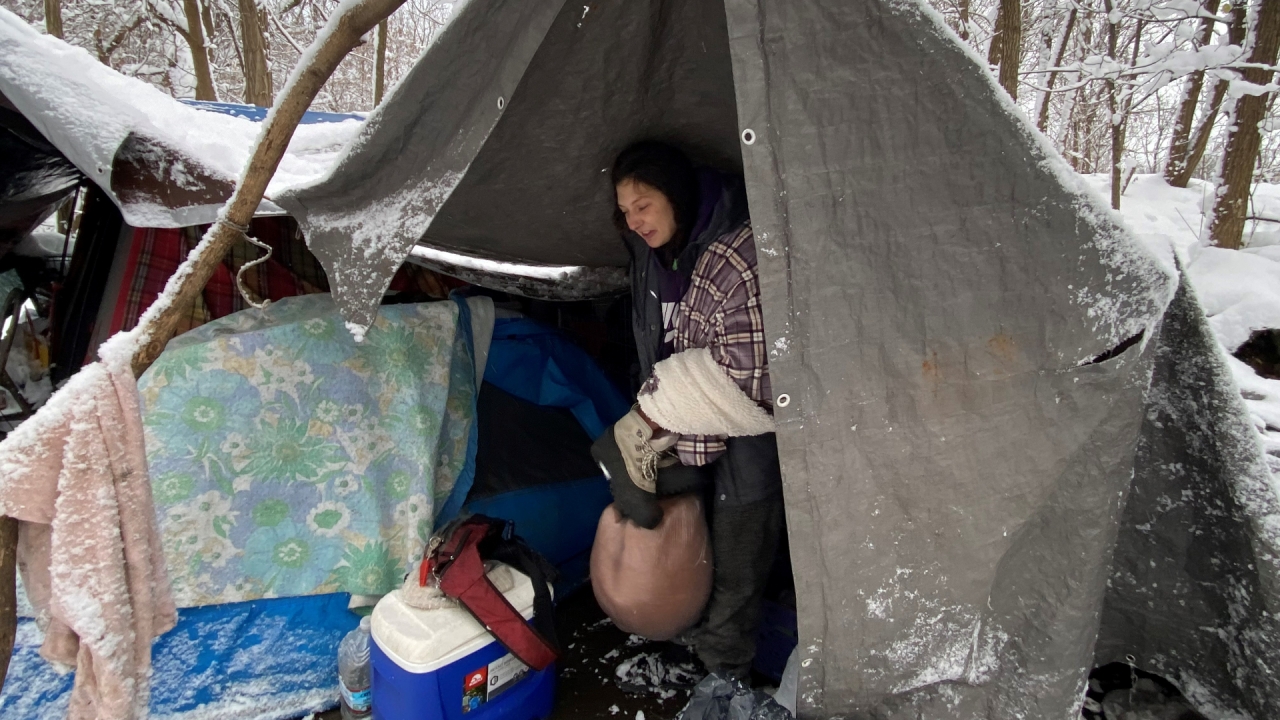 GRAND RAPIDS — It’s a long hike to the place some call home, a hilly spot on the banks of the Grand River — a tent-and-tarp area that’s been here for several years.

It is one of a series of small camps now buried in snow, where the cold wind blows through the holes between the tarps.

Kendra Coalter, 25, is relatively new to the neighborhood and lives outside in the bitter cold.

“Not particularly,” she answered when asked if she was ready for the snow and cold. “But people who have been here quite a while show me the ropes and everything, how to get through.”

For example, as she said, how to heat your tent with a mixture of rubbing alcohol and hand sanitizer in an old aluminum can with the top cut off.

She tried to show how it worked, but the lighter was too cold.

“I just need this lighter to keep me warm,” she said, squatting in a jumble of tents and tarps under trees whose branches bent under the weight of snow.

The winter storm warning has been extended through Sunday

She has been homeless for several months, but does not want to stay in a shelter.

“I personally have a lot of social anxiety, so I’m kind of afraid to go to new places,” she said.

She was there Friday when the church’s pastor stopped by with a pickup truck full of warm-weather gear.

“My car is full of blankets and coats, I try to give them to people as they need them,” said the pastor.

Kendra got a new pair of boots.

Pastor Kevin VanWyhe of the Christian Reformed Church in Byron Center discovered the riverside camps on a bike ride and has been a regular visitor since May.

He does not call them homeless. He calls them, “My friends by the river.”

“Just trying to share the love,” he said. “Like figuring out people and hanging out, living together, sharing food; now some of us are starting to come to our church.’

He has a list of 42 names of people who live along the river, including about 20 on that stretch on the city’s West Side.

“There are really beautiful people here, a lot of hard things in life brought them here,” he said.

He said just last week, a woman set fire to her tent with a mixture of alcohol and hand sanitizer she used to heat it. She was not hurt.

“Her tent burned to the ground. She lost everything.

“The cold is part of survival, but for them every day is survival. We have hope from family and friends, and when they don’t have hope, the cold is hard, but I think the lack of love and lack of relationships is probably even harder. “

As for Kendra, after several tries she finally lit her aluminum heater.

“Yes, there it is,” she said as the flames grew.