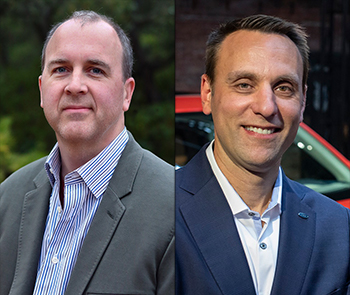 Both Drake and Gray report to Field, as does Anthony Law, Ford’s chief design officer.

“As we enter a busy period with Ford Model e and our $50 billion investment in breakthrough electric and digital vehicles, Doug, Lisa and Chuck are taking on more important roles and building a very capable team,” said Jim Farley, President and CEO. Ford.

“Developing and scaling the next generation of electric and software-driven vehicles requires a different focus and combination of talents from Ford’s experienced team and the many exciting new colleagues joining our company.”

— Roz Ho has been appointed Chief Vehicle Software Specialist. Ho comes to Ford next month from HP, where she was vice president and head of software. She previously held several leadership positions during her 22-year tenure at Microsoft.

— Ho will work closely with Jae Park, who recently joined Ford as vice president of digital product design after successful stints at Google and Amazon.

“Jim Baumbick has been the driving force behind our incredible Ford Blue lineup, built around icons like the F-Series, Mustang, Ranger and Bronco, and new hits like the Maverick, which have led to significant demand and market share growth,” says Farley . “We are building on this strong foundation with exciting new cars and derivatives that will appeal to customers around the world.”

At the same time, Ford is transforming its global supply chain management capabilities to support efficient and reliable component sourcing, in-house development of key technologies and capabilities, and cost and quality of execution.

As previously announced, Hau Tai-Tang, chief industrial platform officer, will retire on October 1 after a more than 34-year career at Ford. The automaker also announced that Dave Filipe, vice president of vehicle hardware modules, will retire on Dec. 1 after 30 years with Ford.

“We are grateful to Howe and Dave for their significant contributions to Ford and our Ford+ plan, which has helped set the stage for our exciting future,” says Farley.