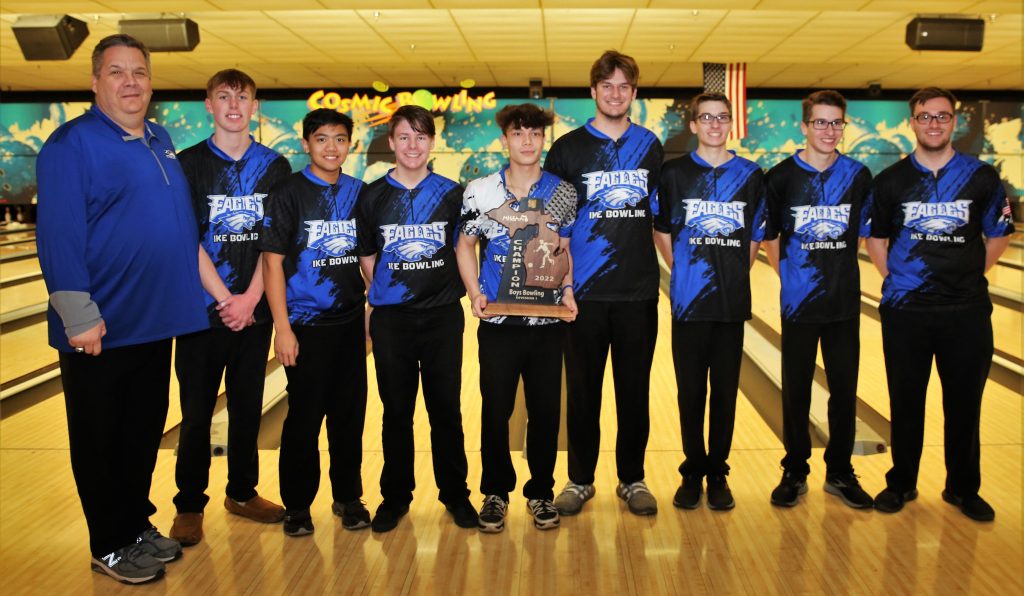 “I have five seniors who were on our state championship team,” Eagles coach John Snyder said. “They’re a real cohesive group of young people, and when under pressure, they get to their feet, focus and do it.”

They not only did that, but also left no doubt as to which team was the best on Friday in Regional Division 1, which hosted the 5 Star Lanes at Sterling Heights. Eisenhower finished with a total of 4373, ahead of Dakota (4193) and Chippewa Valley (3891).

The Big Reds brought the most excitement as they trailed by 25 points in the final game and passed north of L’Ans-Creuse and finished last in qualifying for the state finals next weekend at Thunderball Lanes in Allen Park.

“The win in the state in sophomore year helped in a ton,” Snyder said. “They grew up there. The experience we gained was very rewarding for us this year. They know how to deal with pressure. They rely on each other. When we go to work, it’s a team effort. “

The Eagles knew that if they could fight in Baker’s games, it could be a good day. They trailed Dakota by 111 pins after Baker’s games, but made up for the deficit in the first regular game with 1,116 series.

“We just needed to equalize on the field through the Bakers,” said Carter Milosinovic. “We are performing well in the singles. We did it in one shot. That’s what we do. That’s what we did in sophomore year when we won. “

Milosinovic hopes to end his bowling career in high school the way it began.

“It motivated us a lot, especially since we didn’t play in the cup last year because of COVID,” he said. “If we win this year, we will call it a replay. We were all sophomores then, and now five seniors. Everyone gets older than older. We can all throw a shot when it comes to that. We were there and did it the year we won. ”

Chippewa Valley coach Adam Kongdan tried to keep up the pressure on his team when it advanced to the final, lagging behind LCN by 25 points.

“It’s nice to see them smiling after the hard work they put in.”

Seniors Avery Joseph and Giovanni Costa have been leaders of the team all season, and Friday’s regional match was no exception. Costa started the final game with eight hits in a row and scored 250.

“Gia came over and threw the front eight,” Joseph said. “It helped block him. It was like a spark plug. Everything went as we needed. “

In the third game Costa was motivated for good.

“I wanted to come out with a bang given that my first two games were less than perfect,” he said. “I had to pull one together. It’s great because we didn’t go public last year. “

In Division 1 at the Spins Bowl in Taylor, Warren Woods Tower finished second after Woodhaven, and Lakeview finished last.