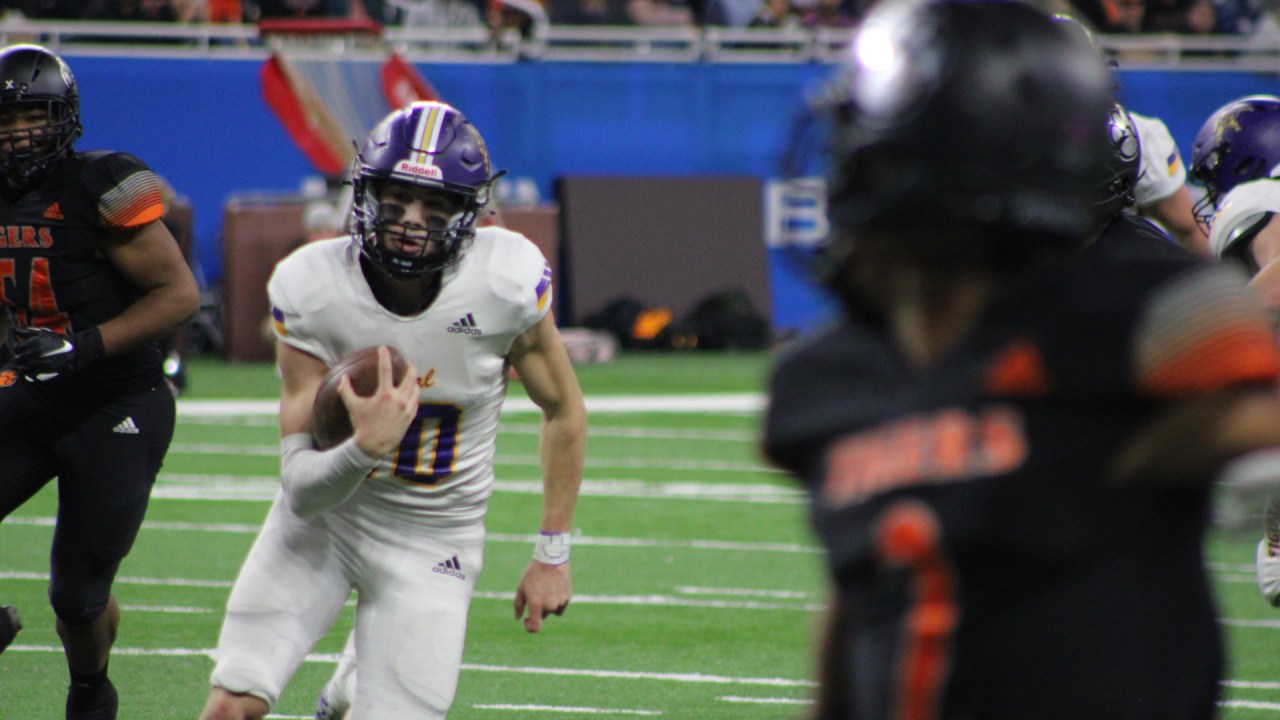 DETROIT (WOOD) — At halftime of Saturday’s Division 1 state final, Caledonia’s football team rose to the challenge of competing with the state’s top-ranked team.

Unfortunately, the second half proved to be the bane of the Fighting Scots in a 35-17 loss to Belleville at Ford Field.

The Tigers finished with a perfect 14-0 record and won back-to-back titles.

The game was deadlocked 14-14 at the half, but Caledonia was outscored 21-3 in the final two quarters.

The Fighting Scots (12-2) are making their first finals appearance since 2005, the same year they won the Division 3 state title.

“I thought our kids played really hard and in the second half they wore us down with their size,” Caledonia coach Derek Pennington said. “We had some runs to finish early in the game, but I’m proud of our kids and the effort they put forth. It’s a great group and we’ve won 12 games.”

The Fighting Scots played inspired ball early against the heavily favored reigning state champions and led twice in the first half.

Junior Brock Townsend gave Caledonia a 7-0 lead in the first quarter with a 1-yard run.

After Belleville tied the game late in the first, the Fighting Scots retook the lead on another 1-yard run by Townsend, set up by an impressive run by quarterback Mason McKenzie.

Tigers sophomore quarterback Bryce Underwood threw a touchdown pass to tie the score with 15 seconds left in the first half.

The touchdown came after the Fighting Scots failed to convert on fourth-and-two and gave Belleville a short field.

“I think the play that turned the game around was when we were up 14-7 and called a timeout because we wanted to get a shot down the field and we didn’t take the blitz,” Pennington said. “We took a sack and right before halftime they scored. I think that gave them a big boost.”

Caledonia briefly retook the lead at 17-14 on Luke Vogler’s 22-yard field goal late in the third, but the Fighting Scots didn’t score again as the Tigers scored 21 unanswered points.

Underwood, who had 149 yards rushing and 155 passing, put the game out of reach with a 48-yard run for a score and a double-digit lead.

He also added another touchdown pass in less than four minutes.

McKenzie led the Fighting Scots with 134 yards on 23 carries.

“We’ve had a great season so we’ve got to keep our heads up, but to lose the last game is definitely a bummer,” McKenzie said. “It’s my last game at Caledonia, so it’s definitely tough, but there’s no better experience than this.”