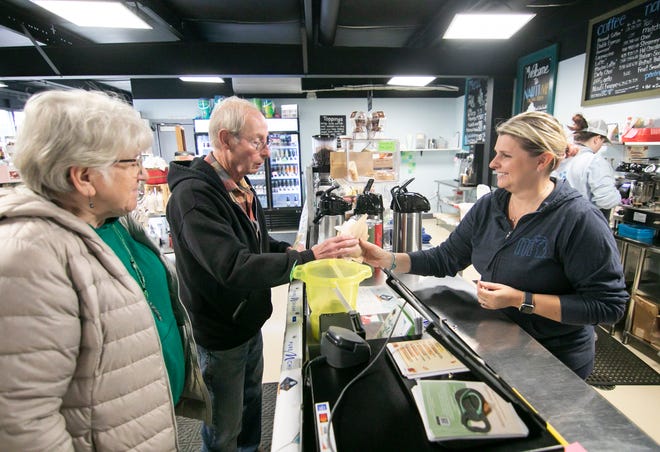 Coming from a family with strong roots in the Portage Lake area, Melissa Kunert has spent most of her life enjoying the Huron River and Lakes; now she and her father are using their deep experience with Michigan waters to embark on a new adventure.

Her father, Kerry Klave, and his family operated Klave’s Marina until it was sold to new owners in 2021. Later that year, the father-daughter team launched NautiMI on the River, offering small watercraft rentals, a boutique featuring mostly Michigan-made products, coffee, breakfast and light fare, and ice cream at 9260 McGregor Road.

“I’ve had private messages and comments on my posts from people thanking us for bringing a business like this to the community,” Kunert said. “I think people appreciate that we’re not just a store that wants to sell them stuff. We want to be a part of their lives.”

Kunnert said she feels grateful when customers have special moments in the store.

“There was a girl who won the cheer competition and she wanted her picture with the cup here with me. It was so sweet,” she said.

As Small Business Saturday approaches this weekend, a number of small business owners pointed to how the community has supported them and helped make their operations successful over the past few years.

Small Business Saturday was founded in 2010 by American Express and has been co-sponsored by the US Small Business Administration since 2011. This day celebrates and supports small businesses and all they do for their communities.

Nick Manista is excited about the new pizza boxes for Captain’s Wööd Fired Pies. Mannisto held some Tuesdays at Captain’s ön Main, 423 W. Main St. in Brighton. The inside of the boxes now features a design that allows people to place their head on top of an image of his professional alter ego, The Captain.

Manista was preparing for the grand opening of the restaurant with a ribbon cutting on November 18. After getting a food truck that followed with pies from a mobile wood-fired oven, he decided to open a custom pizzeria in Brighton.

Earlier this year, he took over Two Brothers Coffee, buying the business from Jim Starnes, who opened the coffee shop in 2008.

“The community that we have with the food truck has really supported us, and then they like coming here and not having to track us down,” Manista said, also saying, “During our soft openings, we had reserved seats and sold out the food truck. They all wanted to support us when we first tried it out of the oven (of the new pizzeria).”

As new customers begin to find him, he wants the restaurant, which also serves coffee, tea, beer and wine, to become a “communal” place for the community.

“Historically, the wood-burning oven was used at a time when it was a common place for the neighborhood and they would make pizza because they needed a hot oven to bake in the morning. I want it to be a community-driven pizza place,” he said.

“Howell business owners are some of the coolest people I’ve ever met,” Cherry said, adding, “It’s more of a community than a competition.”

She said downtown businesses support each other by collaborating on events, spreading the word about other businesses to their customers and promoting each other on social media.

She opened the store after some of her custom shirt designs went viral on social media.

Her work went viral, she said, allowing her to open a shop that also features products by other Michigan artisans, mostly locally.

“We’re a collection of local vendors, so everyone makes something different and I make the shirts. It’s a permanent craft show,” she said.

A mother-daughter team is feeling the love in Brighton

Chef and caterer Ellie Little opened LaLa’s Too in downtown Brighton earlier this year, and her mother, Mary Little, helps her run the shop.

Its storefront, 529 W Main St., serves as a grab-and-go establishment. It has no indoor dining room or kitchen. She and her staff prepare meals, salads, sandwiches and snacks outside the premises. Customers either order to pick up or pop in to grab something on the go.

“Our information was incredible,” Ellie Little said. “People say to me, ‘I told all my friends. I told my whole yoga class.” It was really incredible that so many people wanted us to succeed.”

She said having a storefront has also brought her new catering customers.

“It seems like one hand feeds the other,” she said.

Mary Little said she is grateful for the customers at her daughter’s store. She worked for many years in a pharmacy in St. Joseph Mercy Ann Arbor.

“I wanted to work in retail. I love customers,” she said. “Everybody comes in here happy.”

Support a small business on Saturday

On Saturday, many shoppers focus on supporting local shops and restaurants on Small Business Saturday.

Some stores in Livingston County offer special discounts, promotions or other offers. Some will remain open on Saturday to accommodate local shoppers.

Each year, more than a dozen local shops, restaurants and other businesses in downtown Howell celebrate the Saturday shopping tradition with special deals and offers until 9 p.m.

Howell Main Street Inc. will be giving away coupon bags from local retailers and some free items. Shoppers can pick them up at Bridget Gallagher’s, 201 South Michigan Ave. 10 a.m. to 1 p.m. while supplies last.