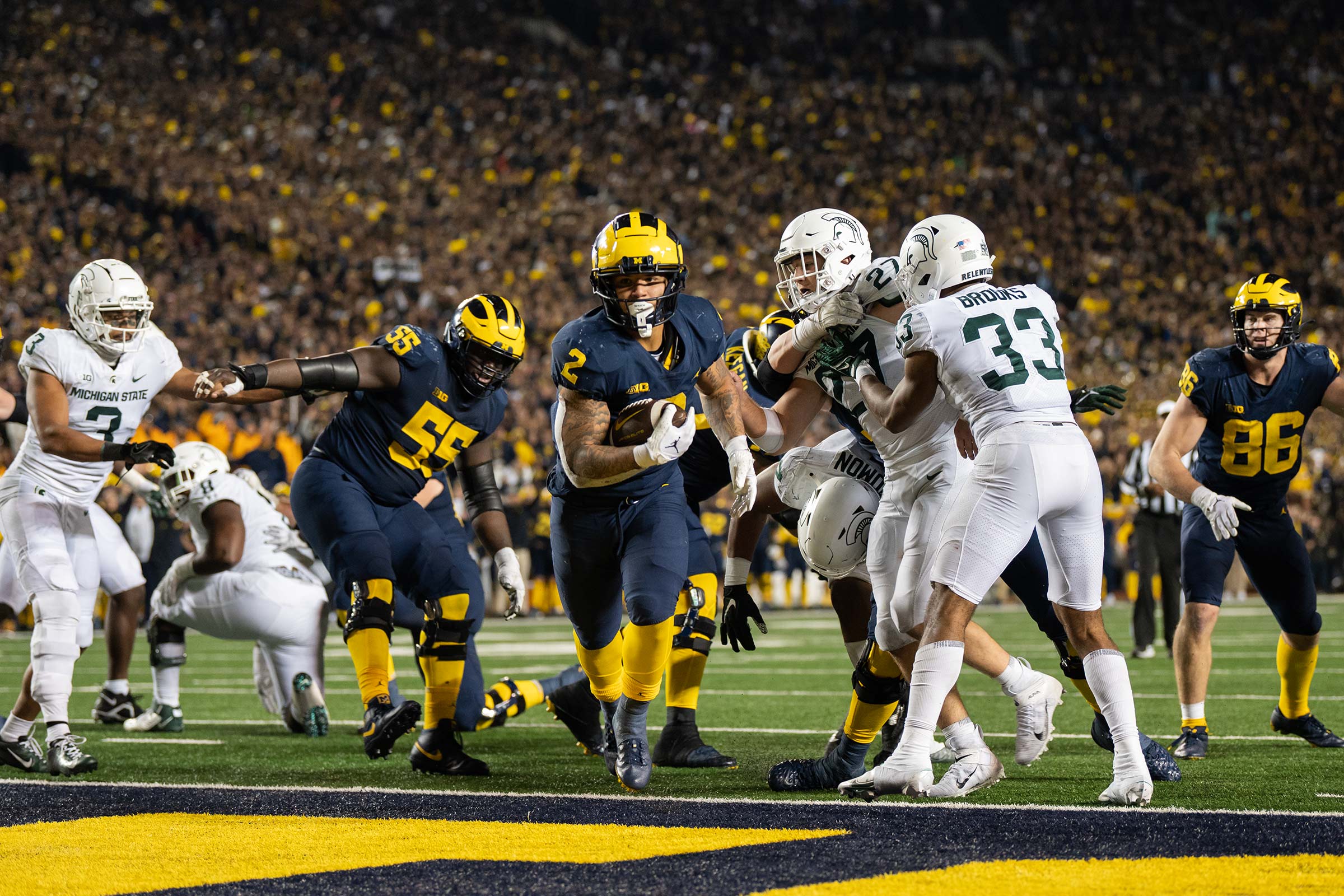 Even James Corum has trouble putting his son’s success into words.

He kept asking the question: What’s it like to look at Blake? He usually runs through a slate of buzzwords, calling it a “blessing,” “joy,” and “a dream.” Sometimes, however, he allows himself to think a little deeper.

“At the end of the day, it makes me think about everything he’s done to get to this point,” James Corum told The Daily. “He put in a lot of work. People can just hear the story. But I saw it. Seeing that from the age of four until now, he simply deserves it.”

This last thought consumes James in these extraordinary moments of pride. Standing in the Big House, surrounded by thousands of fans wearing Corum jerseys and cheering on Blake’s endless success, watching his son pilot one of the most dominant programs in college football, James goes back to where it all started.

Blake’s success is due to an unquestionable, relentless work ethic. As an elementary school student, he performed over 200 push-ups and 200 sit-ups daily in his bedroom. In middle school, James picked Blake up at the end of the school day and drove to the middle school so Blake could get up with the older kids. In high school, he would wake up early to box with his trainers before going to school.

“I’ve always liked the job,” Blake said on Oct. 25. – I always had a hard job, and it never left me. I’m always trying to find a way to outdo someone.”

Such thinking was present from youth. At the age of seven, Blake had a great opportunity to work. The Breakfast Club, an advanced training camp run by Elite Star Performance, held weekly Saturday morning workouts. Classes began with a series of individual sessions at 5 a.m., followed by position-specific drills that lasted until 8:30 a.m.

Korum is originally from Marshall, Virginia. With no traffic, Marshall to The Breakfast Club in Bowie, Maryland is over an hour away. For Blake to attend, he would have to wake up at 3:30 in the morning

“And every Saturday morning he would come in,” James recalled. “He was like, ‘Dad, are you up?’ »

With that, James and Blake would get in the car and drive to The Breakfast Club, one of the earlier, formative steps in Blake’s football ascent.

Blake never slept. Not once.

That unparalleled drive is why Blake is the nation’s best running back. That thrust him into legitimate Heisman Trophy conversation, his performances helping propel the Wolverines into championship contention for the second year in a row.

Blake’s accomplishments even pushed his coaches into uncharted territory. Jim Harbaugh hates comparisons – every time he gets one, he instantly regrets it. However, something else happened recently: By accidentally invoking the comparison, Harbaugh accepted his mistake.

“Blake is the best running back I’ve coached in college,” Harbaugh said with a smile. “… He definitely has the license and the ability to be as good as Frank Gore.”

Yes, that Frank Gore is possibly Harbaugh’s favorite player. Harbaugh coached Gore for four seasons with the 49ers; Gore was a Pro-Bowler during three of them.

So how did Blake, still in his first season as a starter, reach this echelon so quickly?

James’s grandfather and father owned a brickyard. In the summer, James accompanied them as they built the foundation and chimneys. At a young age, he was particularly influenced by his grandfather, who worked nine-hour days and then returned home to work more tending to cattle and pigs.

“He was probably one of the hardest working people,” James said. “… I just followed in their footsteps. I said, “Man, I want to work.” It stayed with me. I’m used to that, I’m used to that.”

Like his role models before him, James works long hours to support his family. He owns and operates a landscape design business since 1996. His wife Christina started working in a restaurant at the age of 14. Together they raised four children.

Following his parents’ example, Blake wanted to help at a young age. From the age of four, he accompanied James to the store and to work.

Even when James left Blake at home, Blake’s work continued.

“One Saturday I had to leave early in the morning to move equipment to graze some driveways,” James said. “He knew I was at work so he sent me this video and he’s in the yard with the ladder, doing some exercises, working out. He sends a video and says, “You work, I work.” »

You work, I work. It’s a saying that both James and Blake live by.

This saying, like everything else, shows who Blake is. It also explains how he became so dominant.

Chris Forsten – Blake’s first trainer at Parisi Speed ​​School in Warrenton, Virginia – began working with Blake at the age of seven. Blake immediately distinguished himself above the rest.

“It’s not a normal age for a seven- or eight-year-old to really want to be there to train,” Forsten told The Daily. “The fact that Blake goes there and wants to listen, he wants to learn, he wants to figure things out, he wants to get better, that’s far from normal.”

Far from normal, but perfect Blake. Forsten has to push most of the athletes he works with; it’s his job. But with Blake, the roles are reversed. Forsten was forced to conduct a seance that pushed Blake to the limit, expanding his capabilities.

“Blake Korum decided a long time ago that he was going to do something big,” Forsten said.

This decision continues to happen day after day. Blake never gave up on that, even when times were tough.

“He just loves it,” James said. “He loves playing on Saturdays, but he loves everything that comes with it. He likes to exercise. He likes to lift weights. He likes to get better. He enjoys the whole process.”

Love is responsible for his success.