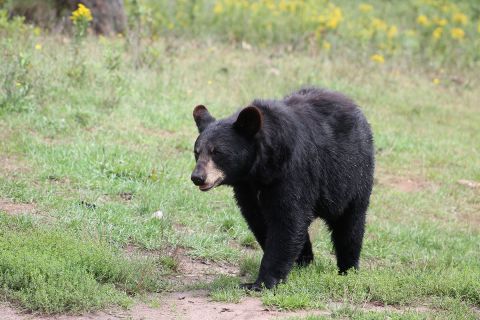 Black bears feel so good in the northern Lower Peninsula that nearly half of licensed hunters, 48 ​​percent, kill one, compared to 28 percent of those who do so in the Upper Peninsula.

The Department of Natural Resources is gradually increasing licensing quotas in some areas, which worries black bear fans.

“It’s not time to increase the number of tags,” said Thorman, who teaches hunting dogs to chase a bear through trees but has never killed a bear.

“We understand that there should be population management, that’s for sure, but we’re worried we’re taking too many (bears).”

The season in the north of the Lower Peninsula is shorter because so many people want to hunt bears and are more likely to kill them, and the DNR wants to keep the population, said Cody Norton, a specialist in large carnivores from the DNR.

“If we extended this season, people would collect more bears than we want,” he said.

There are about 12,000 black bears in Michigan, more than 9,600 of which are on the Upper Peninsula.

Typically, hunters can easily purchase a license to kill a bear in the Upper Peninsula, whereas hunters in the Lower Peninsula must enter a drawing system that can take years to obtain.

“Once people draw a tag, they’re very motivated to go out and get a bear,” Norton said. “Part of that we’ve been trying to allow for population growth, and now we’re approaching what we’re trying to stabilize.”

Dean Oswald, who owns Oswald’s bear ranch in Newbury on the Upper Peninsula, said he was worried that because of the population increase, the government would start issuing more hunting licenses “strictly for money”.

According to Fr. Economic Impact Study for 2019 from the Michigan United Conservation Club, Michigan is one of the best states to purchase a hunting license.

Hunting and fishing licenses are the main source of revenue for the DPR’s Game and Conservation Fund, which accounts for about 20 percent of the department’s $ 464 million budget.

Oswald Ranch is home to 39 bears from across the country. Many are passed on as cubs who have lost their mothers. Oswald said he wanted the DNR to consider reducing the bear hunting season in the Upper Peninsula to two weeks, as is the case in the north of the Lower Peninsula.

“It definitely makes a difference,” Oswald said of the season limit.

Proponents of the bear are not the only ones who want to see an increase in population across the state. According to Thorman, hunters sought short hunting seasons and reduced licensing quotas when they noticed that people were killing a lot of bears and populations were fighting.

As the black bear population began to boom, the DNR increased licensing quotas depending on the district. Some units, regions where bear hunting is prohibited, received a license increase of 5, and others – by 10.

Norton said the gradual increase in the license quota is designed to manage the bear population without affecting it dramatically. Unlike other animals, bears take some time to breed, and it may take years to see how changes in hunting rules affect their population.