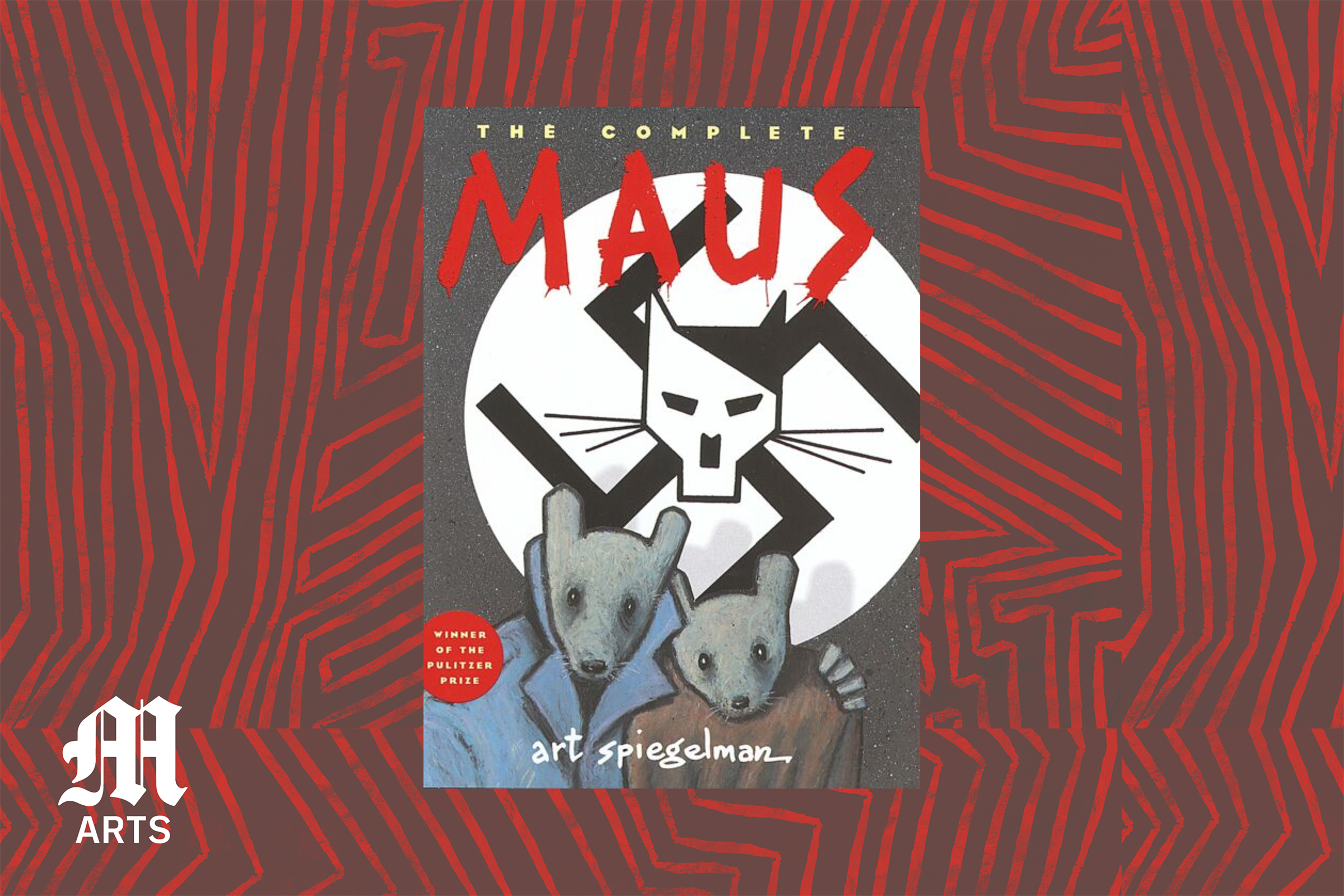 In January 2022, the McMinn County School Board of Tennessee voted for removal a graphic novel “The Mouse” from his eighth grade program. Everyday writers Emma Dutling and Hannah Carapelloti took two different approaches in their responses to this news: one shed light on how banning a book arouses more interest in the title, and the other discussed the importance of why banned literature can teach us despite Then controversial labels.

On Sunday, the Super Cup, as we waited for a completely empty restaurant to close, the conversation between my colleague and me turned to banned books – yes, that’s what we’re talking about at work. I recently read in the news that Mouse, an art novel by Art Spiegelman, has been removed from the eighth grade program in McMinn County in eastern Tennessee. Maus, a novel usually taught in middle and high school, tells the story of Holocaust survivors (based on the experience of Spiegelman’s father), portraying Germans as executioners and Jews as mice. The ban on McMinn County came after a unanimous vote by the school board, which cited eight curses, a picture of a naked woman-mouse and images of suicide as reasons for the ban.

When I mentioned the ban on Maus books, my colleague recalled a quote from Harry Potter (bless the Harry Potter series and the endless life lessons she gives us). In the film “Harry Potter and the Order of the Phoenix”, when Professor Umbridge forbids an interview with Harry to tell everything to share information about the Ministry of Magic, Hermione is delighted. “Why are you so happy?” Harry asks her, to which she replies, “Oh, Harry, you don’t see … If she could do one thing to make sure everyone at this school reads your interview, it would be a ban!”

For us Muggles, “Maus” is an interview with Harry. And, boy, Hermione was right. After the ban, interest in the graphic novel increased dramatically. The book immediately jumped to number one on the bestseller lists. “Mouse” climbed the Amazon second on Amazon’s overall bestseller listand remains the best seller in the Censorship and Politics category even now, a month after the school board made its decision. Walking past local bookstores, I see a menacing Hitler cat flickering in the shop windows. I haven’t thought about a graphic novel since I read it in my freshman year of college, and now it’s everywhere.

What makes a banned book so appealing to readers? Suddenly we have something should not see, so naturally, we want to know why. It’s like when someone tells you “don’t think about the elephant,” and the first thing that comes to mind is, of course, the elephant. Similarly, banned literature becomes as intriguing as an itch in the head that is asked to scratch. We want to know what others think we shouldn’t know; as a result, when “Maus” was banned, readers flocked to read the graphic novel.

Many also drew attention to the Mouse in solidarity with the novel, the author, and the narrative as a critical tool for studying the Holocaust. Recently, the animated TV show “South Park”. released an episode condemning censorship. Directors of educational initiatives at the Holocaust Memorial Museum in the United States Paul Regelbrugge and Gretchen Skidmore, each delivered a speech in response to Maus’s ban on the importance of teaching about the Holocaust through literature. Communities and public libraries have tried to make the book more accessible. A professor from North Carolina has started offering free online classes for middle and high school students. An optional book club on the Mouse was organized at one of my classes. Efforts to distribute, approve, and raise the book swept across the country.

Although the ban on the book “Mouse” in McMinn County was extremely controversial, the graphic novel is more popular than ever. In one Hermione understood: no matter how outraged many were, the McMinn County School Board did its best to rekindle interest in the Mouse. The attempt at censorship had the opposite effect, which was assumed by the school board – with a ban on more readers than ever returning to the eternal graphic novel.

You can contact daily art writer Emma Dutling at emdoett@umich.edu.

Historical fiction has always been one of my favorite genres. I often go back to Marcus Zusak’s The Book Thief and Anthony Doer’s All the Light We Don’t See, both fictional stories about World War II. The time period is exciting and heartbreaking for me. Mouse is a book I have always been vaguely familiar with; the image on the cover of the swastika resembling a cat on Adolf Hitler existed somewhere deep in my mind. But my first real experience with history came this year when I had to read her section for a lesson shortly after she was challenged in Tennessee. Our task was to analyze the graphic novel as a genre, but I was quickly fascinated by the story itself. In the place where I work, there is a copy of the first volume and I read everything in two hours. None of the copies of the second volume were in my local library, but fortunately one remained in the nearby city library. I broke up again, and if I hadn’t been to work when I finished, I would have cried.

Memories of survivors like Eli Wiesel’s “Night” evoke a different level of emotional breakdown. The authors’ accounts seem fictitious, but this is not the case. “Maus” is somewhere in the middle – it’s someone’s real experience, but the chosen carrier of the graphic novel (and cute-looking mice) almost saved me from the horror of what I read. I couldn’t let go of him.

“Maus” is a story within a story. His main premise is Spiegelman’s father, Vladek, who talks about his experiences from the war, but the comic also talks about how those experiences still affect him – and therefore his family – over the years. Towards the end of the first volume, Spiegelman goes with Vlad, who picks up a piece of telephone wire on the street. “You always collect garbage!” Spiegelman mutters. “Why can’t you just buy the wire?” His father replies, “Ps. Why do you always want to buy when you can find it? ”

Some pages are full of horrible memories of the Auschwitz concentration camp, then suddenly Spiegelman returns to his father’s living room, making sure he accurately tells the details, and Vladek scolds him in broken English. Spiegelman himself is a character fascinated not only by Vladek’s trauma, but also by his domestic struggle, which he and his second wife often argue about. Drawings sometimes become a bit of a target, and Spiegelman draws himself by rushing to take a pencil to memorize certain conversations and incorporate them into comics. It’s a multifaceted, and sometimes even humorous, generally stunning story about trauma and family.

The main criticism of “Maus”, when it was first released, came from a fellow animator RC Harveywho did not like Spiegelman’s use of animals for storytelling. He believed this played out the Nazi belief that Jews were a separate “species”. Would this story fit better as a graphic novel with images of people? Would it be better not to draw it like comics at all?

If “The Mouse” was a graphic novel depicting people hanging criminals in the streets and German soldiers waving children against a wall to keep them from screaming, the decision to exclude him from the eighth grade program based on graphic violence would be different. It’s one thing to read the story of a man who survived the war, but to see everything he went through in front of you, even in a cartoon, is a completely different level of horror. By drawing animals instead of humans, Spiegelman should not shy away from depicting genuine Holocaust violence. Although it was not his intention when writing for a younger audience, it can be argued that the format of the graphic novel also makes the story more appealing – but even that is not enough for the Tennessee school board. “They said they wanted to teach the Holocaust,” Spiegelman said a recent interview“But their language gave me the impression that they wanted a more beautiful, more vague Holocaust than I imagine.” Although the decision to paint everyone in the form of animals makes the content easier to understand, the horrors shown do not change. The only obscurity that anyone will get from “Mouse” is the hair of the heroes.

Moreover, if Spiegelman’s intention in his novel was to portray the Holocaust as clearly as possible, then no other medium would suit Mouse better than a graphic novel. There are already countless stories about the Second World War in circulation, both fictional and not. If Vladek’s story had been written in prose, it would not have had almost the same effect – it could have “mixed” with the rest. The uniqueness of the visual presentation of this content allows for broader conversations about wartime. At the beginning of the novel there is a page of panels that tell about the time of Vladik’s service in the army in 1939. Spiegelman painted his father as a child like a simple helmet with eyes, asking why he should shoot someone in a few days. training. Later, however, he does shoot, and how is his target drawn? Like a helmet with eyes. This artistic solution not only underscores the terrifying experience of getting involved in combat at such a young age, but also allows viewers to notice these details themselves. Not to mention that this type of analysis is perfect for the classroom. After all, it is there that we first learn about the atrocities of World War II. The Holocaust is hard to understand and the Maus is hard to read. That is why everyone should read it.

You can contact the daily writer Hanna Carapelotti at hmcarp@umich.edu.