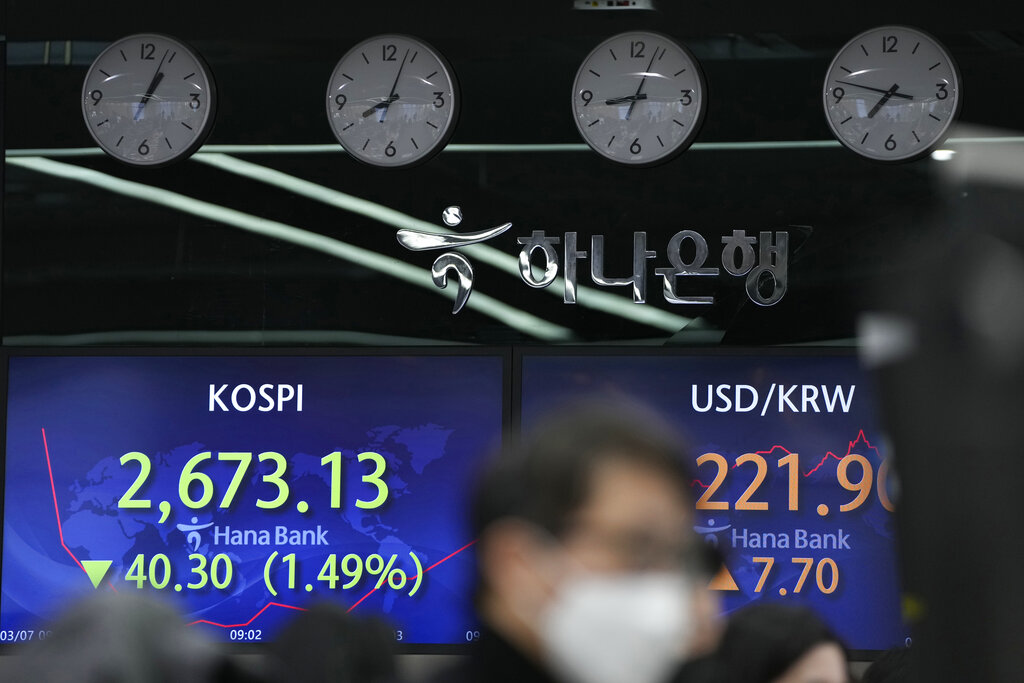 TOKYO (AP) – Oil prices jumped and stocks plummeted on Monday as the conflict in Ukraine deepened amid growing calls for tougher sanctions against Russia.

Brent crude briefly rose above $ 130 a barrel, but later traded at about $ 125 a barrel on Monday. U.S. oil benchmarks also jumped, scoring $ 10 and then giving up part of that advance.

European markets opened lower and US futures fell 1.7%. The price of gold rose above $ 2,000 an ounce when investors bought the precious metal, which was seen as a safe haven during the crisis.

Russian troops have been firing rockets at some Ukrainian cities even after Moscow announced another ceasefire and offered several humanitarian corridors so civilians could flee Ukraine on Monday.

Support for the ban on Russian oil is growing

A similar temporary ceasefire in two Ukrainian cities failed over the weekend – and both sides blamed each other.

Oil prices came under additional pressure after Libya’s national oil company said an armed group had shut down two major oil fields. The move has led to a drop in the country’s daily oil production by 330,000.

But reports say US officials may be considering easing sanctions against Venezuela. This could potentially release more crude oil and ease concerns about cuts to supplies from Russia.

This has pushed the average U.S. gasoline price above $ 4 a gallon, and it’s already reached a milestone. According to the AAA auto club, the price of regular gasoline rose nearly 41 cents, averaging $ 4 a gallon (3.8 liters) across the U.S. on Sunday, for the first time since 2008.

Higher fuel costs are devastating for Japan, which imports almost all of its energy. Japanese benchmark Nikkei 225 lost 2.9% to 25,221.41.

“The conflict between Ukraine and Russia will continue to dominate market sentiment, and so far no signs of resolving the conflict are likely to limit risk sentiment in the new week,” said Yep Jun Rong, IG’s market strategist in Singapore.

“It should be clear already now that economic sanctions will not deter any aggression by the Russians, but will rather serve as a measure of punishment due to the consequences for the growth of the world economy. Rising oil prices could pose a threat to firm margins and consumer spending forecasts, ”Yip said.

China said Monday that its exports in January and February rose by double digits before Russia’s attack on Ukraine shocked the world economy.

Customs figures show that exports grew by 16.3% year-on-year, indicating a resumption of global demand before President Vladimir Putin’s invasion on February 24. Imports rose 15.5% despite a slowdown in the Chinese economy that threatens to exacerbate the war.

China’s No. 2 leader, Premier Li Keqiang, warned on Saturday that global conditions were “volatile, serious and uncertain” and that Beijing’s economic goals would require “hard work”.

Lawmakers want to reduce US dependence on foreign oil

World markets have recently been troubled by concerns about how high prices for oil, wheat and other goods produced in the region will be, due to the Russian invasion, which is causing already high inflation in the world.

The list of companies leaving Russia has increased to include Mastercard, Visa and American Express, as well as Netflix.

The conflict in Ukraine also threatens food supplies in some regions, including Europe, Africa and Asia, which rely on the vast fertile lands of the Black Sea region known as the “breadbasket of the world”.

Wall Street ended last week with a fall in stocks, despite a much stronger report on jobs in the U.S. than economists expected. The S&P 500 fell 0.8% to 4,328.87, posting its third weekly loss in four. Now it is less than 10% of the record set earlier this year.

INTERPRETATION: The trend of tax cuts covers two-thirds of the states | Health-med-fit