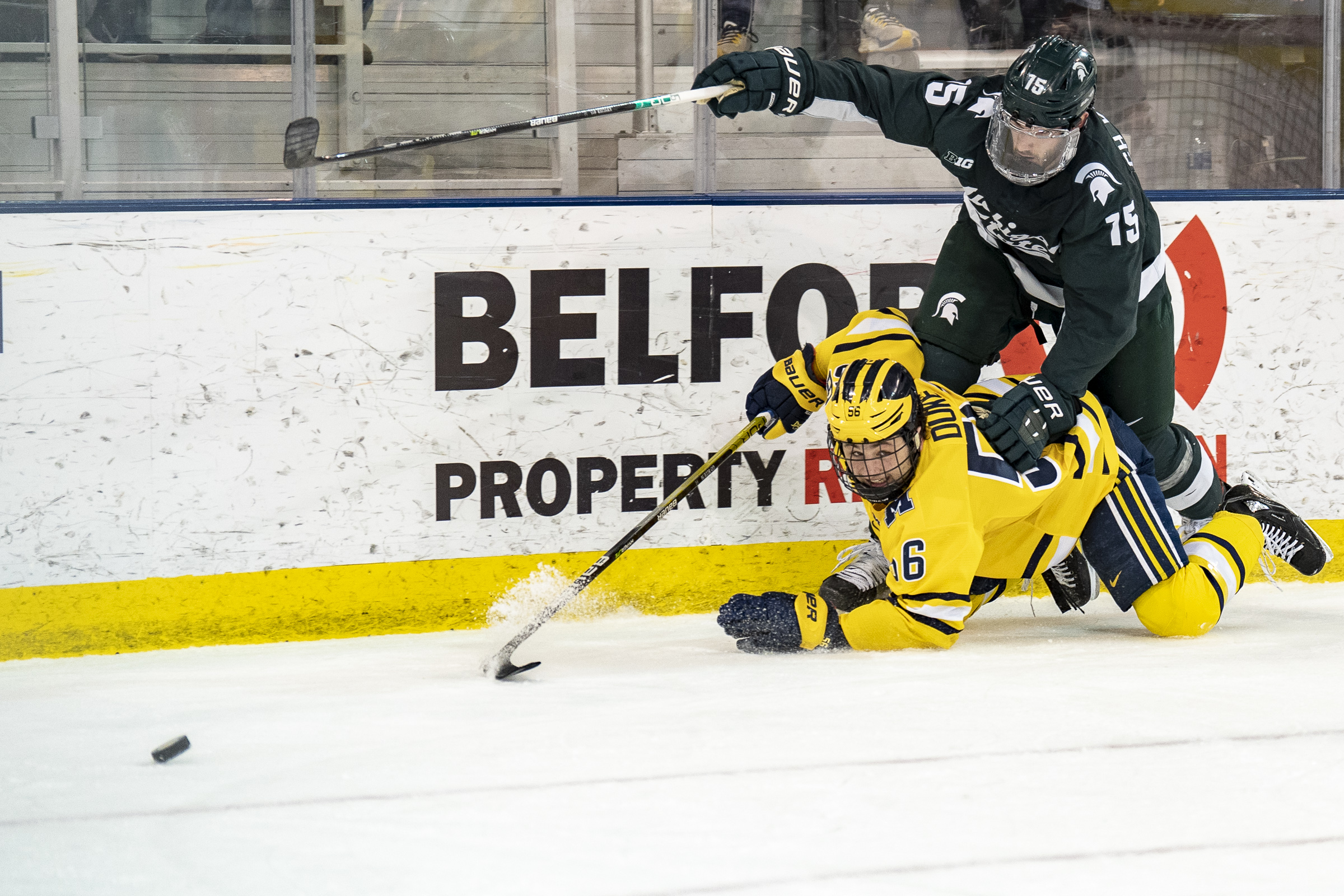 It was a hit that could affect the entire Michigan season.

Michigan defender Christian Krieger has killed Dylan Duke’s legs behind the net, making dangerous contact with the head and sides of the freshman forward. When Duke was lying on the ice in pain, previous games assumed that everything would be ugly – and fast.

But instead of standing up for his teammate with gloved fists and cross-checks, Wolverines responded without violence, instead exploding in the next game. Although this response marks a significant increase in the mentality of the №4 hockey team in Michigan, there is still room to improve its well-being.

“It’s emotional, and if someone keeps poking you in the chest, sooner or later you’ll want to poke them back, I understand,” Michigan coach Mel Pearson said. “But we have to be mentally tough and mentally tough. … The work continues, but we have made good progress. “

And those steps were quick. Just a month ago Duke’s teammates fought like dogs to protect each other after questionable games. In an exhibition game against the U.S. national team development program, junior striker Johnny Beecher clashed with Devin Kaplan. Faced with a teenager younger than him, Beecher’s uncontrollable temper put him in the penalty area.

But against the Spartans Michigan decided to press the counting button. Already with a score of 5-0, “Wolverines” scored three goals during Krieger’s five-minute penalty.

However, this case is just an exception to Wolverine’s habits. In the second row, Michigan first-year striker Mark Estapa and second-year forwards Brendan Brisan and Thomas Bardell scored 106 minutes of penalty this season, often because they fight for each other when opponents cross the line. Fourth-row senior forwards Jimmy Lambert, Gareth Van Way and Nolan Moyle scored a 128-minute penalty in much the same way. Overall, Michigan leads the country in 555 penalty minutes, which is 20 more than Bowling Green, which finished second.

At this point in the season you need to keep your mouth shut – and especially your fists.

“I’ve been doing it a lot longer than these guys,” Pearson said. “So I’ve seen crazy things happen when you take some bad penalties.”

Losing control can give Wolverines more than just penalties. This season, ten Michigan skaters were fined for misconduct. If any of these players reach three major releases, they will be automatically rejected in the next NCAA game.

Given how Wolverines have defended each other in the past, this is never ruled out.

Mixing on the ice happens in college hockey, and penalties for misconduct – whether it’s 10 minutes or throwing out of the game – help keep the game under control. Even after Friday’s game, in which there were four 10-minute throws, coaches on both teams said they were not against the calls.

“It’s a little fight at the end, the boys will be the boys,” Michigan coach Denton Cole said after the game. “I didn’t see anything that got out of control. I think the judges handled it very well. “

But officials who have regained control may soon expel a much-needed player from the squad, and Wolverines obviously don’t want that to happen.

Against a team competing in the Notre Dame tournament – when working full time – Michigan failed to win four attempts in the regular season. Wolverines get a chance to prove their rise against the Irish in the semifinals of the Big Ten tournament on Saturday. For all their depth, they can’t afford to play with tough teams without a full squad.

Demonstrating control against the Spartans means long-term thinking that Wolverines must use if they want to continue playing. Their goals for the season are much bigger than those of rivals such as Michigan State, and they have demonstrated this understanding without taking revenge on Krieger.

“Just win the game,” Pearson said. “Then in the end you’ll feel a lot better than trying to get along with someone.”

If the next player from Michigan inevitably gets on board, blocks or chirps, Wolverines must keep their balance.

If they don’t, their season could end with skating to the penalty area.