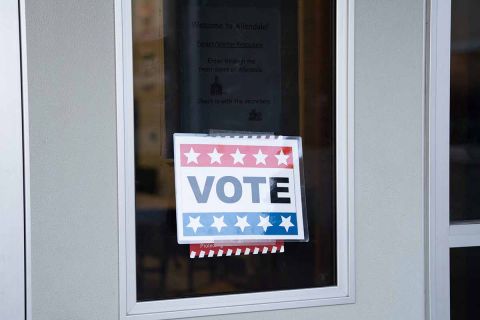 About 4,000 University of Michigan students registered to vote on campus in the days leading up to Election Day. Another 1,500 people registered that day, Ann Arbor City Clerk Jacqueline Beaudry said.

Like the University of Michigan, MSU also saw crowds of students turn out to vote.

While ballot organizers and clerks were pleased to see the huge turnout, they said they needed to be better prepared by 2024 to avoid a repeat of the last-minute spike in student voting.

“We still have a lot of work to do to get them to come sooner,” said University of Michigan art professor Stephanie Rowden, an organizer of campus voting groups. “One of the coordinated efforts has to be in messaging. You have to remember that many of them have not been through this process before.’

Officials noted that although students were notified a month and a half before Election Day about the opportunity to register and vote early, students did not take advantage of this opportunity.

“We didn’t see a lot of interest until the last two days,” Beaudry said. “We were encouraged and happy to see so many students. Unfortunately, we haven’t seen a lot of pre-registration,” she said, referring to the move to save time when students show up to register and vote. “It would help if more students decided to register earlier.”

The Michigan ballot — with a heated race for governor and Article 3, the constitutional proposal to outlaw abortion in 1931 — attracted widespread student interest.

Although local election administrators in both districts say they have tried to meet the turnout they expected, they will do more to prevent such delays as 2024 approaches. This year, both schools have set up voting information for students and worked with local election boards to provide multiple opportunities to register and vote.

Local administrators told Votebeat that they will be hiring more Election Day registration staff for upcoming elections. In Ingham County, where MSU is located, County Clerk Barb Byram says the changes should also include improving technology and other resources, such as funding, but Byram has not yet said whether she will seek additional funds for the effort.

The students “had a sense of humor and camaraderie” about the experience despite the long lines, Rowden said, adding that she was surprised and pleased by the turnout of young voters.

“And they had a sense of appreciation for those of us who work [the election]” said Rowden, who worked with a bipartisan coalition campuses and student organizations aimed at getting students to vote.

“The fact that they stayed with us shows that they were excited about the vote,” said Olsen, the MSU spokesman. “We did everything possible to satisfy them. We tried to make registration and voting as easy as possible.”

Olsen said there was some confusion among students who had not changed their address to their college residence and were required to do so before voting. Volunteers helped transport them to another polling place on campus, Brody Hall, where they could change their address and register to vote in one place.

Olsen said that while MSU’s turnout efforts have been successful, he recognizes that “there are definitely some things that need to be reviewed and our efforts improved.”

Those who monitor the turnout of young people were pleased by this enthusiasm. Cheyenne Hunt-Major, a Gen Z political activist and lawyer in Washington, D.C., saw lines of young voters waiting to vote, in many cases for the first time, “made me very proud.”

“Information and educational activities [groups] done on campuses was extremely effective,” Hunt-Major said. “These lines were such evidence that the message [to voters] was landing.”

But a political activist warns that long queues can also become an obstacle to voting and democracy. Hunt-Major said election officials and colleges should explore ways to ease the “rite of passage” for voters, allowing them to be “part of democracy.”

Michigan State University and UM Ann Arbor and UM Dearborn were among the nation’s colleges and universities applauded ALL IN Campus Democracy Challenge for student engagement and voter engagement efforts.

Nearly 400 schools were selected for being “most active” in getting students to vote. Fourteen other Michigan schools were recognized for their voting initiatives, including Wayne State University and Oakland University.

“The research is clear: Colleges and universities that make a focused effort to increase participation in nonpartisan democracy have higher voter registration and voter turnout,” Jennifer Domagal-Goldman, executive director of the ALL IN Campus Democracy Challenge, said in a press release Wednesday. .

UM graduate student Erik Pedersen, who cast the last ballot in the state at 2 a.m. Wednesday, voted at a polling place at the museum on the Ann Arbor campus after standing in line for 6 hours.

“I was surprised by the long lines, as were many other students, but in retrospect we shouldn’t have been,” Pedersen said in an email. “Many of my fellow students felt very strongly about Proposition 3. It is my understanding that the majority of students voted in favor of Proposition 3.”