After a slow start, Michigan women’s basketball wins over Fairfield 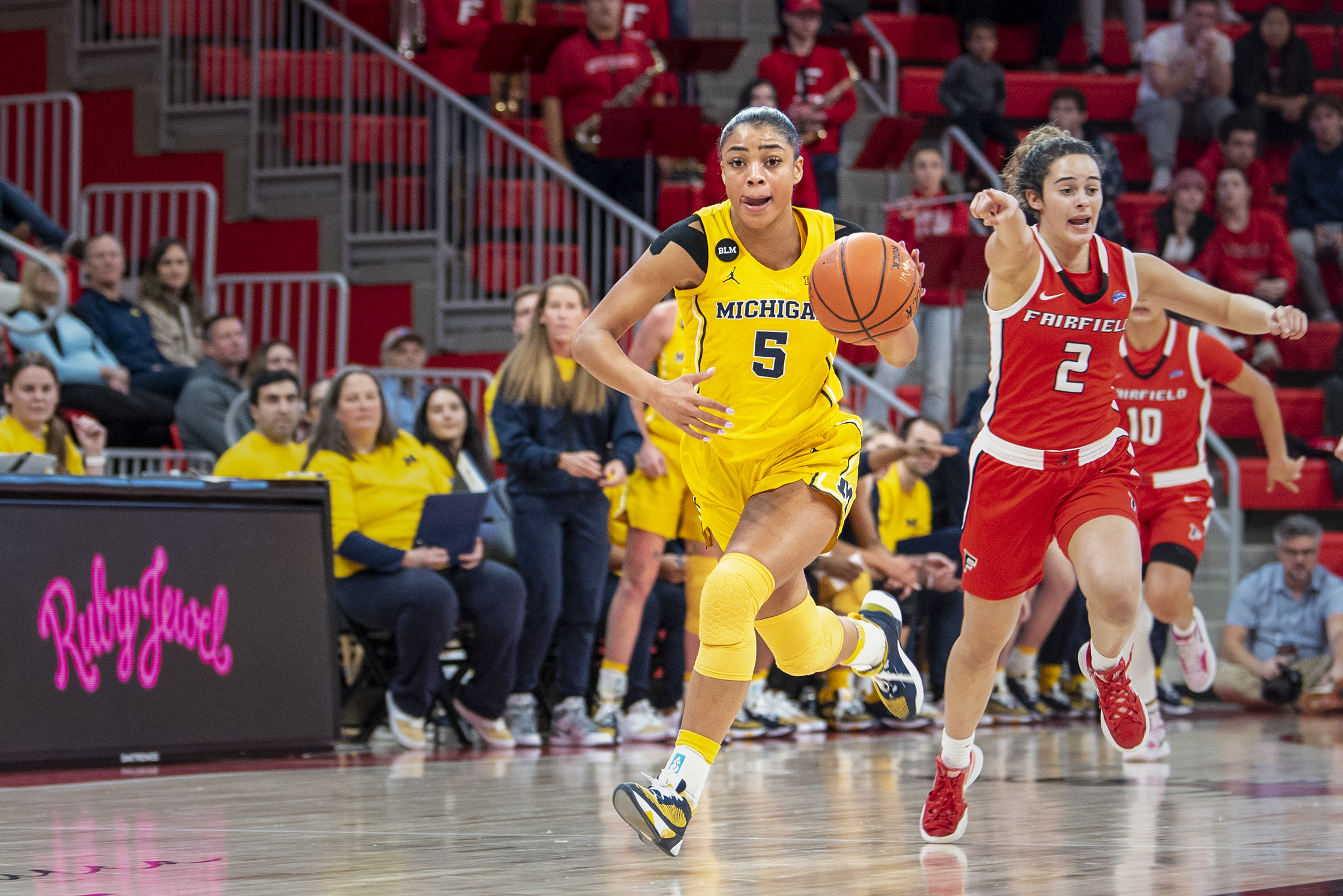 FAIRFIELD, Conn. — The No. 23 Michigan women’s basketball team (4-0 overall) entered its first road test against Fairfield (2-3) with no experience in a hostile environment and minimal experience playing behind. And for most of the first half, that situational inexperience showed.

After a slow start and some sloppy play, the Wolverines were able to slowly pull away from the Stags for a 69-53 victory.

Fairfield drew first blood, scoring five unanswered points before senior guard Maddie Nolan hit back-to-back 3-pointers to lead Michigan, both of which were assisted by fifth-year senior Leigh Brown. The rest of the first quarter remained tight, relatively messy, as the teams traded points, fouls and turnovers. Sophomore guard Lyla Felia’s buzzer-beating 3-pointer gave the Wolverines 5 points late in the first quarter, giving them a burst of energy they hoped would carry them into the second.

But Michigan struggled to find separation as the Stags struggled to keep the game close. Fairfield looked faster, more alert and like a more cohesive team, while the Wolverines let the Stags’ passing and aggressive zone defense affect their play. Going into halftime, Michigan seemed to get into more of a rhythm, going into halftime with a 34-25 lead, its largest lead of the half, which quickly grew after he scored seven points in the final minute.

The Wolverines looked more cohesive at the start of the second half. Interceptions on three of Fairfield’s first four offensive possessions extended Michigan’s lead to double digits for the first time all game. After Brown scored five points with less than a minute to play, the Stags called a timeout with less than three minutes left in the half.

Right out of the timeout, the Wolverines forced Fairfield into another punt as their defense continued to play with an intensity that seemed to be lacking earlier in the game.

Now it was the Stags’ turn to play frustrated, after their quick turnovers with two defensive fouls on a solo drive to reach five team fouls less than halfway through the quarter.

As Michigan continued to force Fairfield to turn the ball over, the Stags turned into a stalemate.

The Wolverines held Fairfield to just six points in the second quarter, finishing the frame with eight points on nine turnovers.

With a 16-point lead in the final quarter of the game, Michigan kept the pressure on. Gone is the sluggish play that plagued the team in the first half. Instead, full-court defense, trapping and aggressive rebounding were on display. But with that increased intensity came more fouls, and the Wolverines sent Fairfield to the line three times in as many minutes.

As the final buzzer approached, the Stags fought to stay in the game, preventing Michigan from extending their lead. But ultimately, the Wolverines’ aggressive defense and methodical offense were too much for Fairfield to overcome.