A lame duck? The Michigan session could be very bad this year 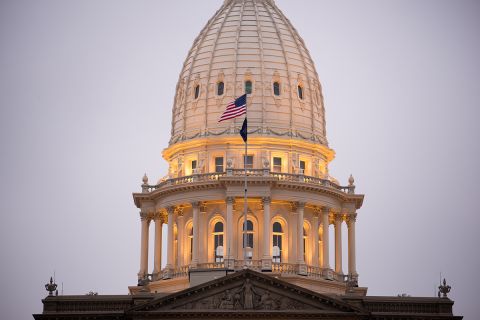 The House is currently scheduled for six days — Dec. 6-8 and 13-15 — but some of those session days could be canceled and others are likely to be filled with farewell speeches by departing lawmakers rather than legislative debates.

House Republican spokesman Gideon D’Assandra said leaders have yet to confirm a timetable for the lame-duck period. Senate GOP spokesman Matt Sweeney did not respond to questions about the lame duck plans.

“The lame duck is probably going to be a hand duck,” said state Sen. Jeff Irwin, D-Ann Arbor. “There will not be a flurry of crazy action, as sometimes happens, which is not surprising. What happened during the elections does not create any incentive for this.”

In 2018, Democratic lawmakers accused the Republican majority of overreaching in the weeks before Whitmer took office.

Among the laws adopted then was unpopular GOP-backed law requiring the Michigan Department of Education to rate schools on an A to F scale so that parents can better evaluate performance.

Starting January 1, Democrats will control both houses of the legislature. Even so, there would be no reason for Republicans to push through something partisan now that Whitmer would veto it, said Ellen Lipton, chairwoman of the Michigan Legislative Education Committee and a former Democratic lawmaker.

Lipton said that instead of picking fights, lawmakers will look for easy wins on issues where there is general agreement and on bills that have already passed one of the two chambers.

One bill package that meets these criteria would provide assistance to students with dyslexia, a learning disorder that can affect word recognition and reading ability.

The bills would require schools to screen for dyslexia, provide extra support for struggling students and ensure all students receive phonics-based reading instruction. They passed the Senate unanimously in May, but stalled in the House Education Committee.

Committee chairwoman Pamela Hornberger of Chesterfield Township, who lost Fr a tight race for the state Senatedid not say why the bills were not scheduled for consideration.

Irwin, who has shepherded the bills through the Legislature, said there is still time.

“This is one of the few (packages) that is completely bipartisan,” he said. “It promotes literacy. It will help thousands and thousands of children. Employers support it. And it got huge support.” And he said decrease in reading skill underlines the urgency of passing bills.

“If we pass these bills and bring phonetic awareness back into the classroom, we will help thousands of children learn to read earlier and better,” Irwin said.

Several other bills have also passed one chamber and may be considered by the other during the “lame duck” session.

Programming can count as a language credit

One bill allow computer programming courses to replace world language credits required for high school graduation. It passed the House 59-49 in May and is now up for a vote in the Senate Education and Career Readiness Committee.

Committee Chairwoman Lana Theis, a Brighton Republican, has not said publicly whether she plans to schedule a vote.

The Republican bill received some support from Democrats in the House of Representatives. It has the support of the business community, which says computer programming is a skill needed for future jobs.

The Michigan Department of Education opposes the bill.

Whitmer has not taken a public position.

The WorkKeys test may be optional

In July 2021, the House of Representatives overwhelmingly adopted a bill that would eliminate the requirement for high school students to take the WorkKeys Career Readiness Test.

Under the law, districts or individual students can still participate, and the state will cover the cost of the test.

Michigan juniors have taken the test since 2007, when it became part of the Michigan Merit Exam. The state spends about $4.4 million a year to have about 105,000 students take the test.

Supporters of the law say the money would be better spent on Advanced Placement and International Baccalaureate exams, which most participants now pay for themselves.

Earlier this year, the Senate Education Committee held a hearing on the bill and recommended its passage. It now awaits a decision in the Senate.