A board of UMich regents meets to discuss finding a president, new campus buildings 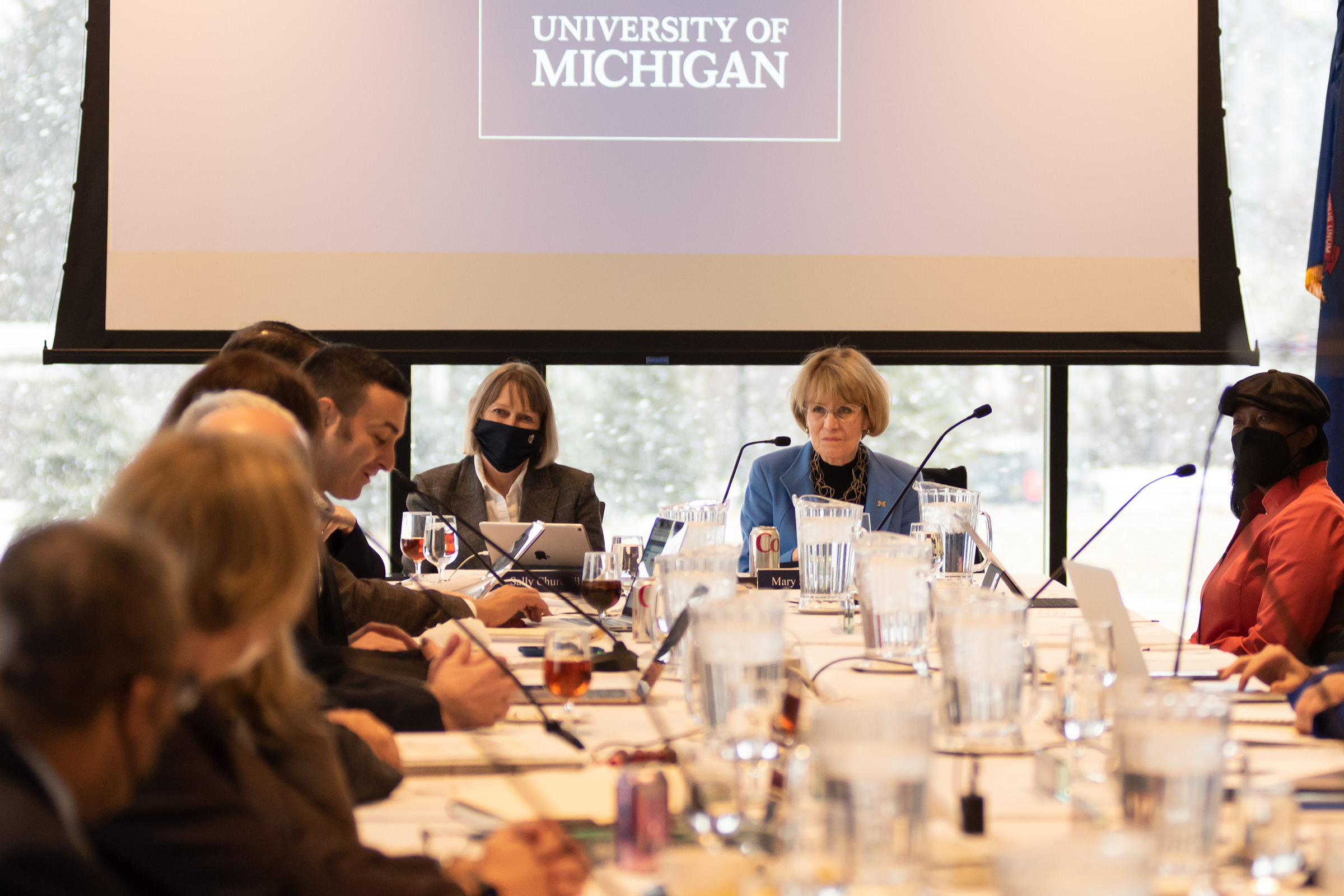 The University of Michigan Regents Council met Thursday at the Postma Family Club for its first meeting this year. They discussed plans to set up a presidential search commission, new proposals for dormitories on the North Campus, and learned from the Central Student Government about current crime detection policies.

Coleman began the meeting by emphasizing her commitment to the university community as well as her focus on academic success.

“Our collective commitment to learning and discovery operates on yesterday, and it will guide us to tomorrow,” Coleman said. “This is what makes us, as a university, take great risks so that we can always seek new knowledge for the benefit of society.”

Coleman’s current contract with the university stipulates that she works for six months or before a the new president assigned.

Regents Denise Ilyich (D) and Sarah Hubbard (R) made statements about Presidential Search Committee, consisting of students, faculty, and staff from all three campuses and Michigan Medicine. The duo announced the committee in email to the campus community

“Our council is very excited about our presidential search, and we have worked very hard to create a Presidential Search Committee that will broadly represent our very diverse community,” Ilyich said. “We have already had our first meeting and we look forward to hearing from this incredible group as we continue our search. We want to hear directly from students, faculty and staff on campuses about their prospects and expectations as we work to identify the next leader of our university. ”

Hubbard said the university is hosting Fr. a virtual listening session February 18 for teachers and staff at the Ann Arbor campus. Other classes designed for Michigan state medicine, Ann Arbor students and the Dearborn campus community are scheduled for Feb. 21-23.

The regents also discussed plans to build a geothermal station to power a new one Leinweber Computer Science and Information Building Company. This project would be the first large campus building to use a source other than natural gas to control climate.

Nitya Arun, president of the Central Student Government, gave Student Government Report discuss the university crime detection policy also as student representation in the Council of Regents. The current criminal disclosure policy (SPG 601.38) requires university staff to disclose all charges and convictions that occur while working with the university; CSG passed a permission on Tuesday asking the regents to repeal the policy.

Arun also discussed CSG’s partnership with state Senator Jeff Irwin (D), with whom they drafted a bill advocating for student representation on the Regent’s Council. She said students make up the majority of the UM community and deserve a voice in the university’s decision-making.

“For many years, CSG has advocated for student representation on the regency council for one simple reason,” Arun said. “People who make decisions on behalf of students should be students or at least be informed students. Who knows student life better than us? The University of Michigan is nothing without its students. ”

The regents officially approved wear the administrative building of Rob W. and Aldit Fleming, to be held this summer. The demolition is estimated to cost $ 3.4 million and the site will be rebuilt open green area.

“Currently, the demand for Michigan University housing exceeds supply,” Harman said. “While we can accommodate all freshmen in need of housing, second-, third-, and fourth-year and transferred students may not always be able to get housing at the university.”

“The project will be the basis for the future development of the facility, including the dining room, student health facilities, ancillary facilities and other geothermal facilities for heating and cooling the complex,” said Chatas.

Chatas then explained the estimated cost and estimated timing for the new student housing plans.

“In order to fulfill the schedule of the bed opening project for the autumn semester of 2024, we propose to submit bids and conclude contracts for liquidation and demolition, utilities and other preparatory work, taking into account the schedule worth no more than $ 5 million,” Chatas said. “The cost of the project is $ 190 million.”

The regents voted to approve the plan.

During a public comment at the meeting, Senior Logan Smith expressed concern about the University uneven distribution of funding for humanities programs at all three campuses.

“The budget model, which offers more financial support to wealthy white students and less financial support for working-class and colored students, cannot be called anything other than structurally racist,” Smith said. “A university that claims to be diverse, equitable and inclusive cannot continue to use a budget model that perpetuates economic and racial inequality.”

“Intentionally or not, but in my circles we say that the university is postponing until we graduate, because you know that a loud voice one semester will disappear in the next,” said Bukvar-Klein. “And I don’t expect action at the university level to happen in one day, but I expect it to be effective.”

LSA Senior Noah Strang, president of the UM branch of the Young Democratic Socialists of America, brought eight copies petition – one for each regent – signed by 572 community members for the university to establish a minimum wage of $ 15 for all its employees.

“As a strange, low-income, formerly homeless, financially independent student, I know what it’s like to experience economic hardship and worry about paying bills as a full-time student,” Strang said. “We can afford to pay students $ 15 an hour. It’s a matter of priorities, not resources. ”

Samantha Rich contributed to the report on this article.